Velvet ants – actually wasps – get their name from the hairs that cover their body, and because they resemble ants. The flightless females, which are often encountered while wandering on the ground, especially resemble ants. Two common varieties include thistledown (Dasymutilla gloriosa) and red (Dasymutilla magnifica). Two large ones include the Satan’s, which is black with a yellowish-white abdomen and the D. klugii which is red and black. They are all in the family Mutillidae. 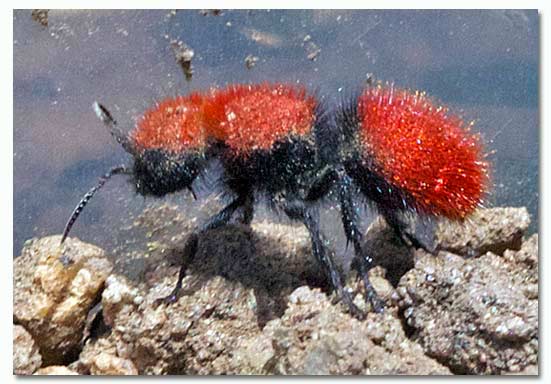 Velvet ants range in size from 1/8 inch to one inch, with great variation within species. Size appears to depend upon size of host used during development. Velvet ants look like miniature walking cotton balls. One variety, Dasymutilla gloriosa, has been described as a "creosote seed with legs" due to its white, thistledown-like hairs. Red, orange, yellow, black or white bristle-like hairs, known as setae, cover the entire body. Biologists call this type of coloration "aposematic," and they used the term to refer to conspicuous warning colors of animals that predators should avoid.

Males have wings but no stingers, while females have stingers but lack wings. The heavy, deeply pitted integument (outer covering of body) functions as a suit of armor and can only be penetrated with great difficulty.

Over 150 species of velvet ants occur throughout the United States, southern Canada and Mexico, although this is a rough number. Only about one third of those species are known from both sexes, while another one third are known from males only, and the final one third, from females only. There is a distinct possibility that many of those males and females belong together in the same species but because of the marked sexual dimorphism, it is not obvious which males belong with which females and vice-versa. At least three dozen species inhabit Arizona. They live in all parts of the desert from hot and dry to semiarid areas to shrublands.

Velvet ants are active during the day, and they may be some of the first insects to hit the trail in the morning and last to settle in for the night. They retreat from high ground temperatures in the middle of the day by burrowing under debris or climbing into plants. Nectar is their preferred food. Velvet ants are active from April through November, depending upon local climate. If you see a walking velvet ant, you can be assured that it is a female. 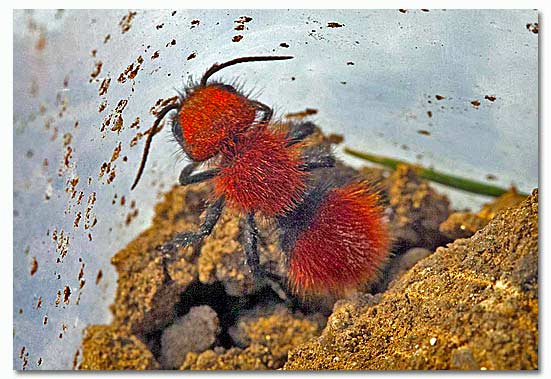 Occasionally large aggregations form for courtship and mating. One grouping in Arizona contained an estimated 6000 individuals within 1500 square yards. More often, however, velvet ants are loners with males generally flying low to the ground seeking the wandering females. Biologists are not positive how males find females but believe that vision and pheromones play a part. After mating, females will scurry about looking for wasp or bee pupal chambers. Once found, they will enter a nest and use their ovipositor to lay an egg on or near to the host. If the parent is still present, the velvet ant may be carried away by the other bee or wasp.

A grub-like larva will emerge from the egg, feed on its host, and grow to full size in a matter days. The shell of the original inhabitant then becomes a site to construct a cocoon for the velvet ant pupa. Some adults emerge that summer while others overwinter in a pupal or prepupal state. 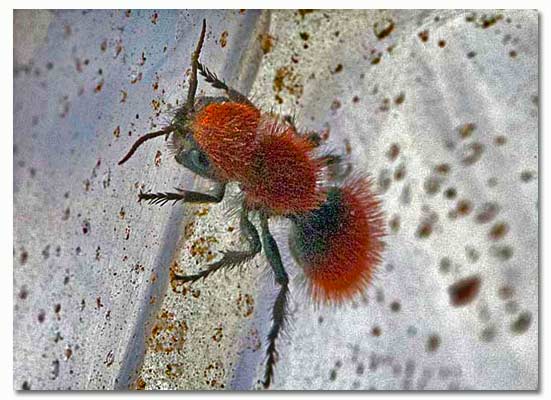 Interesting Facts About the Velvet Ant