Unless... Someone can come up with and post a photo of a Big Horn Sheep being airlifted from one place to another, and make up a story to go with it, about how he was rescued from an area of certain death, and relocated to an area where he could live out his days in comfort. (A Rescue mission with a happy ending)

Ron B. and I was hiking/climbing from Idyllwild to Palm Springs via Tahquitz Canyon back in the late 70's. It was on the third and final day when a bighorn lamb (2-3 months old) approached us and tried to suckle my fingers. It had been abandoned by the herd (probably couldn't keep up). In spite of a swollen belly – I could tell it was starving and would die if we couldn't save it.

I placed a 1” climbing sling around his neck to secure the creature. It wasn't needed – we was all it had and the lamb wasn't leaving us for anything. Our plan was for me to continue on to Palm Spring for help while Ron stayed in the canyon with the lamb.

After several hours I hiked out to Ann D. (a friend) house near the mouth of the canyon and used her phone to call Don L. (another friend). Don had several helicopters and owned Landell's Aviation in Desert Hot Springs.

Don said he would love to help but there was two conditions:
1.) At his cost it would be about $1000.
2.) Because it was on the endangered list, permission from Fish & Game was required.

I was able to raised the $1000 in just a few minutes. I called Morris (another friend and President of the Palm Springs Mounted Posse) and told him I hadn't read anything in the papers about PSMP in a long time. I asked him how he would like to do a good deed and get some PR out of it. I explained the situation, and he said PSMP would foot the helicopter bill.

Fish & Game was a different story. The first person I spoke with in Sacromento threaten to have me arrested for touching the creature. I then asked to speak with his supervisor – a much more reasonable person. I explained the herd had abandoned the lamb and it would surely die if I didn't get permission to save it. He granted me permission.

I called Don back and told him I had met both conditions. He landed his bird in the middle of the street by Ann's house and I hopped in. We flew back up Tahquitz Canyon where he did a one runner on a boulder. Ron got in the back seat and I handed him the lamb. We then flew the lamb to the Living Desert Museum in Palm Desert.

A rescue story with a happy ending!

PS: Sad note here. My good friend and best helicopter pilot I've ever flown with - Don Landells – crashed his bird and died on 10/6/86 while working on a bighorn project in the Mojave Desert.
http://www.rmru.org/newsletters/1986/oct1986.pdf
Top

A little Photoshop later and.

So, Tradclimber is carrying 70 pounds of whiskey to a party with some Peninsular Bighorns (why Tradclimber parties with sheep I don't know). Well, one thing leads to another and one of the sheep gets alcohol poisoning and has to be airlifted out. 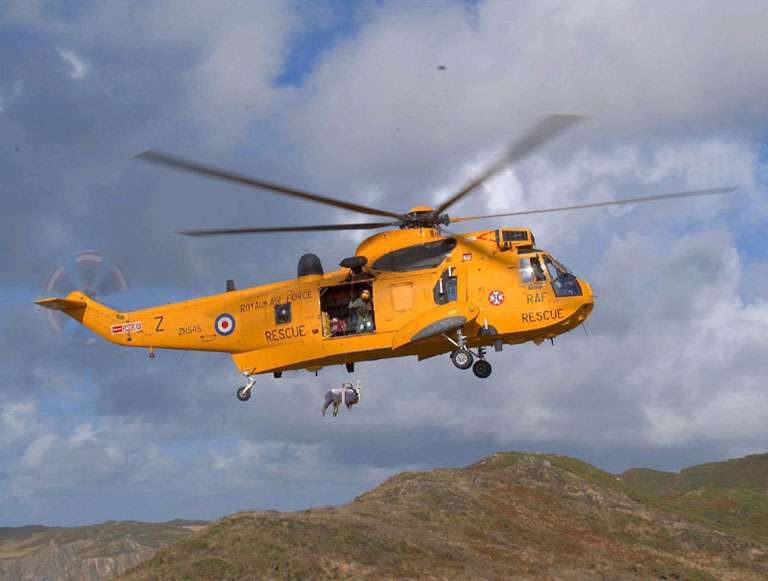 This was supposed to be about SAR Happy Endings! I start reading about spilling whiskey, and I can tell you that there is NO HAPPY ENDING to that story!

Thanks Mike for rescuing my hide.

You're welcome to come hiking/climbing with me anytime in remote areas of the Santa Rosa Mountains.

I love the Santa Rosas. I have mostly been spending time North of Joshua Tree and down in the Borrego Badlands.

I love the Badlands, but there's not even any bushes once you get deep into them. Not even a dang snake. lol

Usually, neat pics of wildlife are purely coincidence. I'll be in the area looking for something else, and I happen upon a small group of bighorn sheep, then I spend the next several hours seeing just how close I can get to them.

Pretty cool story about the lamb.

.
At least 40 times from Idyllwild to Palm Springs by way of Tahquitz Canyon. Each trip was 3-4 days.

Now, don't get me in trouble again.

PS: hj, If you check my avatar closely, that's me rock diving in Tahquitz Canyon at the 3000' elevation level around 1975.

I have many stories of “Successful Search & Rescue Missions with happy endings”.

This is one of my best.

30 years ago my brother Dave and I found another inexperienced solo hiker that was lost in the desert.

PS: This rescue hit home for Dave. His son, Jereme, was also two years old at the time.
Top

TradClimber wrote:I have many stories of “Successful Search & Rescue Missions with happy endings”.

This is one of my best.

30 years ago my brother Dave and I found another inexperienced solo hiker that was lost in the desert.

PS: This rescue hit home for Dave. His son, Jereme, was also two years old at the time.

Dang. That one hits home for me. My daughter is about that age. And she's starting to move really fast on her feet now. So cute to watch her learning to walk. Now we just need to teach her not to walk too far.

A clove hitch around each ankle with 3" of slack works well.