These were the style of L-shape rods used

I’m fairly skeptical person and just had to try.
Darn if those rods didn’t magnetically crossed
as I approached the object.
I felt the pull. It was strange thing!

The man who demonstrated it says that certain people can find any sort of object using this method. He went on to say that a person using a map and a pendulum informed WW2 agents of submarines location. The power he says is not in the rods but in the body’s magnetic field and mind of the person doing the dowsing.

The open house was very informative also. They had ore stamper in operation from Bisbee (1890’s) that was reassembled at the museum. This is a picture of the gold bearing ore that they were crushing.

This quartz ore was collected from a site in Bumble Bee, Arizona

I sure don't have a problem with this topic, and there are plenty of folks who are convinced it does work. I have seen it work for finding buried water pipes, never tried it for gold or treasure but as far as I know, it might work. I look forward to reading what others have to say on this. Thank you in advance,
Roy
Top

From the book Jewel by Victoria Finlay

In reference to opals

“The water content also means that, astonishly,
opals can be detected by dowsing
-the trick the old timer had used.”

I can’t find a pic on the internet of this opal
but a pic is published in her book
it certainly is an astonishing stone!
weighing 256 grams
& looking like a stained glass window

but here is some opal from that area 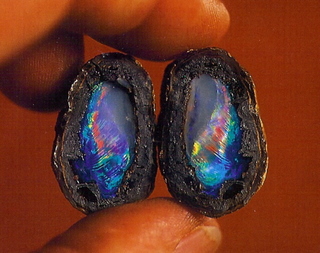 http://www.opalsinformation.com/index.p ... e=f-larger
but to the dowsing issue one wonders if the report is true

As a kid I used to play around in the back yard with those rods. Struck an endless supply of water with them once. My parents weren't too happy though - after they had to pay the plumber to fix the pipe.

That is pretty interesting about opal and dowsing, the water content being something that dowsing could "key" onto. I would think this would be limited however to areas that are pretty much desert, for if the ground is fairly saturated the opals water content would not likely be different enough to get a reaction.

I wonder if that is not what is happening with dowsing for metal ores too - that a water content in the ores causes a reaction?
Roy
Top

The miners who did the dowsing for the opal used a piece of fence wire. They were skeptical of any results & to macho to use rods. But they figured dowsing had as good of chance to locate opal, as say, just throwing a hat in the air and seeing where it

They tried for several days, feeling self-conscious walking up & down with wires. Then the wires jumped. They walked that area again & more reaction till finally the wires crossed. That where they pegged their claim and the opal of yoweh was the result.

Anyway they were telling this story to the author and then got interrupted. The author never did extrapolate on the dowsing part and the miners never said any more. Which is interesting. They must have been pretty committed to the dowsing process if they did it for several days. But no one elaborates. It may just be a tale told to throw others off track. Or it may be the truth.

But if it is the truth then I’m not sure what more remarkable?
The stone or the dowsing?
Well at least the stone is real & solid
and the dowsing is some mysterious… who knows?

A woodcut from the book, “de re Metalllica” by Agricola published 1556

I seem to be one of the 'blessed' ones as far as dowsing is concerned, but I have never tried it on minerals.
Back where I come from we tend to use a Y-forked fresh twig - and I have had it almost twisting the bark off in my hands when crossing a water-vein. I know there are many sceptics, I can't logically explain _why_ it works, but it sure does!
Roy - you may well be right about the water-content in minerals under desert conditions ... something to keep in mind!

Ohhh - I haven't introduced myself (ooops). As the handle implies, I live in TX and some years back my daughter lived outside of Phoenix- which got me interested in the LDM. Even went up there (only managed it once - alas - but I will be back!). My daughter insisted I take her German shepherd with me - which was a disaster!! Dog and 'jumping cactus' is _not_ a good combination - so I had to cut the trip rather short as I came back with a hedgehog rather than a dog!! It's funny now - it was not then!
Top

LoneStar wrote:I seem to be one of the 'blessed' ones as far as dowsing is concerned


If you had said that a few years ago, I would have snickered for hours. However, a very good friend of ours believes it, and does it. (and when he told me, I snickered).

Of course, he got a tad ticked off, so...............he insisted on proving it - my choice of places. Well, I did, and he did, and it didn't take anything fancy, a couple of brass welding rods that were in the back of MY truck, he bent and went to work. Took him all of 5 minutes to pinpoint a lost water line. (even I didn't know where it was, so, nobody can tell me that I gave out any hints).

Years ago, when I was a youngster (yes, many years ago

), my parents bought a piece of property, and they picked out where to put the house, and where to put the well. A friend of my dads came over and witched the place, and he told my dad to switch where the well was going with where the house was going. Of course, the blueprints were already a done deal, and the guy who was digging the foundation was coming the next day, so that wasn't going to happen.

Well, bottom line is, my dad never did build a house there - the foundation hole was a pond, complete with frogs, and the well went dry every week or two. My parents sold the property and bought something else, but, back then, I did not believe him. (I knew the well went dry and the cellar hole stayed flooded - really a pond, because the water never went away), but I didn't believe the guy really "witched" it - or that anyone COULD really witch - until that friend of ours proved it to me in one afternoon. (I've seen it done since then, too).

I don't seem to have the "gift", and I'm still amazed by the people who do. Roy seems to be able to do it, even in the desert. (he has tried it since our friend proved that it CAN work).

It makes sense about the opals - the water - when we came to live here in SD, the council guy came and witched where to put our water meter, because there was a fire years ago, and the water pipes in this area were lost, and they didn't have it mapped out back then. Funny, he found water pipes to a well on this property that nobody knew existed (besides the town water pipes).

They do say (some people) have the ability to dowse whatever they are looking for. (water, metal pipes, electrical wires, etc.). I don't know.
(of course, I'm still trying to train a dog to find gold

My dog can find gold.
Top

I have a question about this guy that said he could dowse for gold: "What color was the Rolls Royce he drove? HAHAHA More than likely, he drove an old Pickup. If the man could REALLY dowse for gold, then he wouldn't have any time to give speeches, because he would be in the mountains every day recovering tons of gold.

I believe that some people can dowse for water and oil. I have seen water done, but went to school with a guy who's dad owned an Oil Exploration Company. His dad told me that he kept a couple of dowsers on his staff (and paid them well). He said his dowsers did just as good finding oil as all his expensive computers and equipment.

I think that some few people can dowse (not NEARLY as many as say they can). I also believe that Long Range Locators are only good at locating suckers.