The Lost Dutch Oven Mine

The Lost Dutch Oven Mine

One of the most famous lost mines in California is known as the Lost Dutch Oven mine. There are several versions of the story, as is the case with other lost mine legends, perhaps the best known is the one in which a railroad worker named Schofield decided to do some prospecting in his time off. According to this version, somewhere in the Clipper mountains northwest of Essex (in Bernardino county) he found an old stone house. It appeared to be long abandoned so he continued on, and some miles further on he found a spring. Near the spring he spotted an old trail, so he followed it; the trail led him up over a hill, and he spotted a huge boulder that was split in two. The path went through this split boulder, and into what he believed was an ancient Spanish camp.

I am paraphrasing here, but basically he found pieces of ore and tripped over an old rusted Dutch Oven. The Dutch Oven on being tipped, spilled out handfuls of gold nuggets! Schofield filled his pockets with as much gold as he could carry and went back to "civilization" where he celebrated his good fortune in the old-fashioned way.

The upshot of the story is, Schofield, on having celebrated up all of his gold, returned to the Clipper mountains to get more gold and could not find the mine again! He could not even find the trail. Others have sought this mine unsuccessfully over the years, as Schofield gave enough details in the topography that it seems as if it would be easy to find it again.

The story has been published in many magazine articles and treasure books; there are a number of articles online as well. Here are a few links;

This lost mine ought to be find-able; the old stone house (or cabin) may still stand, though the trail and spring may be difficult to locate, often wildlife and livestock will keep a trail in use enough that it can be followed even after a century of no human use. The Clipper mountains includes a Wilderness Area so if the mine turns out to be within the boundaries of the Wilderness, you may not be able to file a mining claim on it, at least not in the normal way. But as rich as it is supposed to be, you should be able to mine it even with hand tools and make a tidy profit.

Good luck and good hunting amigos, I hope you find the treasures that you seek.
Oroblanco
Top

i was wondering if there were other members here also from so. cal area that might want to join up in search of this lost mine or other lost mines in the so. cal area. if interested you can contact me at:
Rick45704570@yahoo.com

So the dutch lose ovens as well as mines? Is there no end to the things they lose??

I don't think that Tom Schofield was a "Dutchman" though amigos; this is how legends get scrambled and confabulated. A Dutch Oven has little to do with a Dutchman. 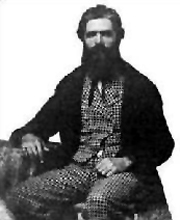 <from http://www.legendsofamerica.com/az-lostdutchman2.html>
Unlike the Lost Dutchman, this lost mine (as far as I know) has never been claimed to have been found and it has nothing to do with either Jacob Waltz or the Superstition Mtns, or Arizona for that matter. For anyone who wants to make that claim that "I found the Lost Dutch Oven mine", we will need to see that rusty old Dutch Oven full of gold, so get cracking amigos!

PS this lost mine is also known as the lost Schofield mine, for anyone researching it you may find it under this name rather than "Dutch Oven".
Top

but that my whole point !
why would someone be cooking gold ?
hhhmmm.....
Top

roc2rol wrote:I think were missing what the headline is really trying to tell us

Any chance you could post more pics of that gold nugget?

roc2rol wrote:I think were missing what the headline is really trying to tell us

Any chance you could post more pics of that gold nugget?

I will post more of it
as soon as its done cooking!

Actually, I believe this ore sample I have is fools gold...
Top

why would someone be cooking gold ?
hhhmmm.....


Well, we don't know that they were actually cooking the gold, they very well could have been just using that pot as a handy container. Gold is very dense/heavy and they may not have trusted a canvas or cloth sack. There is good reason to "roast" gold ore however, in the cases where you have sulphide type ores, roasting it (getting it very hot) can cause a chemical change in the sulphides and allow more gold to be released, so that when the ore was later crushed (after cooling off of course) you could pan out a greater percentage of the gold.

There are some easy tests for pyrites to tell them from gold amigo, as Jim mentioned you can tell with just a simple scratch of your knife point on it. Pyrites when crushed turn to powder that doesn't look like gold at all, as you know gold is very malleable and will mash/flatten out when struck with a hammer. Pyrites can have gold in them too, so don't just assume that if you see pyrites there must not be any gold - in fact some of the richest gold mines in my own backyard area <Black Hills SD> are gold in pyrites believe it or not.

I find it interesting that a Dutch Oven was used in this instance as a gold receptacle; the story of the Lost Arch mine has a similar story of a large cooking pot full of gold, and in the Lost Adams story there is the large coffeepot full of gold nuggets and dust. The old-timers had to make-do with whatever equipment they had with them, as they could not make a flying trip to Walmart for some containers!

Good luck and good hunting amigos, maybe you will be the one who finds that literal "Pot-o-Gold"!
Oroblanco
Top
Post Reply
21 posts