The Desert's Lichen Crust on Rocks 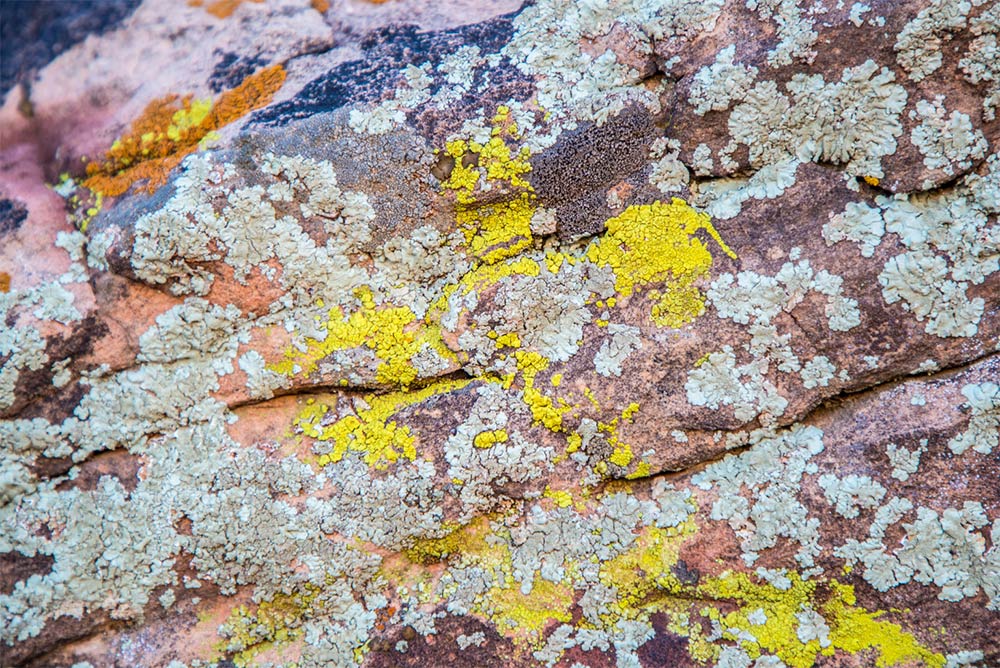 Lichen on Rocks in Nevada

Without a doubt, the most colorful coatings on rocks are produced by lichens, a remarkable symbiotic relationship between microscopic algal cells and fungal filaments. Although lichens can also withstand extreme environmental conditions, they generally cannot survive as well on the dry, sun-baked boulders where desert varnish microbes flourish. Rock lichens come in a variety of bright colors, from red, orange and yellow to brilliant shades of green. There are hundreds of species in the southwestern United States, including leafy forms and low-growing crustose species resembling a thick layer of paint.

This basalt outcrop on the Santa Rosa Plateau of southern California is covered by a dense crust of four colorful lichen species, including orange Caloplaca, yellow Candelaria & Candelariella and gray Xanthoparmelia. There is not a trace of desert varnish on this boulder.

The lichen body (thallus) is composed of algal cells living inside a compact mass of fungal tissue. The algae are photosynthetic and provide the fungus with carbohydrate nutrients. The delicate algal cells also gain mechanical protection from hostile climatic conditions by being tightly enveloped in a dense meshwork of fungal filaments.

This is especially true on arid boulders, where neither partner could survive on its own. Indeed the relationship is a kind of marriage where each member depends on the other for its survival. It wasn't until 1867 that the dual symbiotic nature of lichens was described by the Swiss botanist Simon Schwendener. One of the staunch proponents of the alga/fungus marriage hypothesis was the excellent naturalist and scientific illustrator of this time period by the name of Beatrix Potter--who latter became a famous author of children's stories!

A dozen or more species of lichens may grow on a single boulder, often completely covering the rock surface. Crustose lichens form such a tight interface with the crystalline surface of some rocks that they are practically impossible to scape off. They will even grow on shiny black obsidian. Many crustose rock lichens spend most of their lives in a desiccated "dormant" state and have extremely slow annual growth rates.

Lichens dry out very rapidly and may loose up to 98 percent of their water content. When a lichen is wetted by rain or morning dew, it quickly imbibes water like blotting paper, and photosynthesis within its little algal partner is revived for a while. Since lichens are among the first plants to grow on bare rock, they play a role in soil formation by slowly etching the rock surface. Microscopic rock fragments intermeshed with the lichen become loosened by expansion and contraction, as the lichen is alternately moistened and dried.

Close-up view of several crustose lichens slowly etching the surface of metavolcanic rock in the Coast Ranges of southern California. The lichens include lemon-yellow Acarospora schleicheri, brown A. bullata, and gray Dimelaena radiata.

In the natural environment, plants are constantly invading and colonizing new habitats -- a phenomenon known as succession. Since lichens are among the first plants to colonize bare rock, they play an important role in primary succession. After lichens have etched and crumbled the rock surface for centuries, mineral soil and organic matter begins to accumulate. Then other plants such as mosses and grasses begin to grow, followed by herbs, hardy shrubs, and finally trees.

Although lichens produce weak organic (phenolic) acids, it is doubtful that these acids have much effect on the etching of rocks, unless they are calcareous. For most rock surfaces, the etching process is probably mechanical. Crustose rock lichens are able to grow on bare rock, sinking their spreading thallus into every minute nook and cranny. Microscopic rock fragments intermeshed with lichen thallus become loosened by expansion and contraction, as the thallus is alternately moistened and dried.

The rock-breaking power of plants is greatly enhanced when seeds fall into cracks and then germinate. This is particularly true in the case of woody shrubs and conifers with powerful expanding root systems. Throughout the subalpine Sierra Nevada there are forests of pine, fir, and hemlock growing in relatively shallow soils and duff overlaying solid granite. This massive bedrock of granite was scoured and polished by glaciers as recently as 12,000 years ago.

On rugged granite outcrops, large colonies of lime-green map lichen (Rhizocarpon geographicum), ashy-gray Aspicilia cinerea and orange Caloplaca saxicola may be thousands of years old. In fact, the colorful chartreuse rock lichen Acarospora chlorophana may grow only a few millimeters per century. One has only to gaze at the spectacular panoramas of glacier-carved granite throughout the Sierra Nevada to appreciate the magnitude of some crustose lichens.

The blackened surface of massive domes in Yosemite National Park is actually crustose species of Buellia, Verrucaria and Lecidea atrobrunnea. Growth rates from rock lichens on glacial moraines have been used to approximate the time interval between the advance and retreat of glaciers.

Rock lichens have played an important role in the survival of native people and explorers. In addition to providing food for their animals, Indians, Eskimos and Laplanders eat certain lichens. Leafy lichens called rock tripes (Umbilicaria) are boiled in soups or eaten raw. They are also added to salads or deep fried, and are considered a delicacy in Japan.

Throughout history, peasants of Persia have avoided mass starvation by eating the abundant crustose rock lichen Lecanora esculenta. This lichen readily becomes detached in small patches and is blown off the rocks by wind, often accumulating in crevices and under shrubs. It is mixed with meal and made into a kind of bread in Turkey and northern Iran. In fact, some biblical scholars think this lichen may have been the "manna" which saved the starving Israelites during their exodus from Egypt.

Through the remarkable marriage between algae and fungi, lichens have etched out an existence in places where no other life forms could possibly live. Although they have survived millions of years of evolution, many lichen species are now endangered by atmospheric pollution. This same fate may also affect some of the desert varnish microbes. Since lichens absorb most of their mineral nutrients from the air and rain water, they are especially vulnerable to toxic air-borne pollutants.

Because they have no way to excrete the elements they absorb into their tissue, toxic compounds become even more concentrated. The toxins cause the photosynthetic algal cells to deteriorate and the subsequent death of the fungal spouse. Extensive off-road vehicle activity in some desert areas stirs up vast quantities of alkaline dust. This increased atmospheric alkalinity may affect manganese oxidation by varnish bacteria, thus slowing or inhibiting the development of desert varnish.

Like the proverbial canary used to detect invisible but deadly methane fumes in a coal mine, lichens are sensitive barometers of atmospheric pollution. In fact, their vulnerability has made them very effective air pollution monitoring stations for the U.S. Forest Service and National Park Service. Lichens and desert varnish are fascinating and complex living organisms. We still have a lot to learn from them. In addition, they coat our desert mountains with a myriad of beautiful colors.