In the old days, a mobile phone was used to make phone calls and to send an occasional text message. My first phone was a large Radio Shack analog phone for my car. It had a good range and had to be mounted in the back of my jeep Cherokee, and the antenna was attached to the jeep’s roof. It set me back around $1,200.00. That was back in 1987 – I would be out in the desert and I used to get excited to call home from the middle of nowhere. 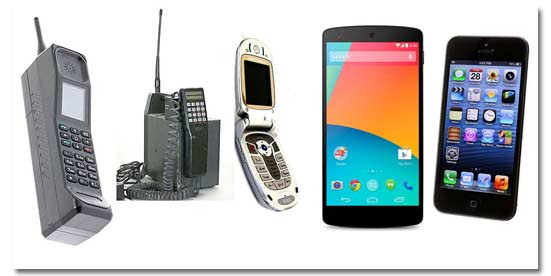 Then came the Motorola flip phone, similar to the communicator used on the starship Enterprise. Cellular networks were now digital, but the range was less then on my analog phone. I held off for a while, but in the end I got the flip phone. In January of 2007, everything changed again with the introduction of the iPhone by Apple. The iPhone was now more than just a phone with a camera and text capabilities, it was a mini computer. Around the same time Google introduced the Android phone, and both phones became know as smartphones. I got one right away.

Most of the newer smartphones these days come equipped with some very capable hardware that you may not even know about. Apps allow developers to use these features to perform wonderfully addictive tasks.

Here’s some of the hardware built into most of today’s phones that make those apps work:

Apps add new capabilities that rely on your phone’s hardware to make it even smarter. Here are five little known apps I’ve added to my phone. 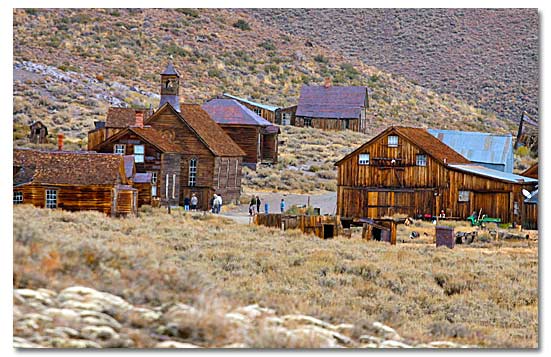 Exploring the desert, you may come across many strange things as well as deserted ghost towns. The inhabitants are long gone, or are they? Using the ghost detector app, which employs the phone’s magnetometer, you can check for unusual distress in the magnetic field. The app can also be used as a metal detector if you’re after more earthly objects. Use it to find lost treasure or check rocks that might be pieces of a meteor.

The Metal Detector app is from Google Play; it’s in the 3rd set of the Smart Tools collection (EMF detector, ghost detector). Metal Detector is made by Android Boy, who states, “The magnetic field level(EMF) in nature is about 49μT(micro tesla) or 490mG(milli gauss); 1μT = 10mG.” The developer says it measures the magnetic field value using the magnetic sensor that is built into your smartphone. Its accuracy depends on the accuracy of your phone’s sensor; if your phone’s sensors are “damaged, broken or non-existent,” the app won’t work. Should there be metal which is capable of being magnetized, the strength of the magnetic field will increase, which will be shown on the display as a series of changing numbers. You can select a sound for an alarm that alerts you to the fluctuation. There’s a nice little video here showing the app detecting a ruler, metal in a computer screen, and various other situations:

Try using this app to find electrical wires in walls (like a stud finder) and iron pipes in the ground. Just open the app on your device, and move it around. You will see that the magnetic field level is constantly fluctuating. That’s it!

If you’re a ghost hunter, you might try experimenting with it to detect spirits. Free.

Metal Detector – The maker, Alexandr Balyberdin, describes this as a “Real metal detector, works with only magnetic metal (such as steel, iron, etc.)”. The sensitivity is adjustable and the display has an old style needle gauge that arcs across a number range.

Ghost Detector Tool – Free EVP [Electronic Voice Phenomena], EMF [Electromagnetic Field], and Tracking Tool. Purple Penguin, this app’s creator, says, “This application has the ability to scan multiple frequencies for paranormal activity! We’ve incorporated EVP, EMF, and video scanning into one single app for hunting ghosts!” If you’re worried about your home, your workplace, or the abandoned mining shack you’re holed up in, just scan to see if you pick up unusual frequencies. Purple Penguin suggests asking questions or giving messages to the “other side” if you’re not picking anything up.

Check Your Heart Rate – There are some good apps out there to check on your physical state when you’re hiking or exploring in the desert, or if you should find a ghost.

Instant Heart Rate – The maker, Azumio says, “Place the tip of your index finger on phone’s camera and in a couple of seconds your Heart Rate will be shown. A real-time chart will show your every heart beat. It uses your phone’s built-in camera to track color changes on the fingertip that are directly linked to your pulse. This is the same technique that medical pulse oximeters use.” This app comes with a nice intuitive interface and actually shows your heart beat with a visual representation just like a hospital device. You can keep a history of your heart rate results too. If you have an Azumio account you can download your data in csv format.

They do note that it works best on devices with a LED flash.

Earthquake by the American Red Cross – In the Southwest, earthquakes are hidden threats. It’s good to know how much earthquake activity is taking place around you. I particularly like to know this information before entering a cave or narrow canyon.

Red Cross, the maker says, “Receive alerts and notifications when an earthquake occurs, prepare your family and home, find help and let others know you are safe even if the power is out – a must have for anyone who lives in an earthquake-prone area or has loved ones who do.” You can set the app’s notification level to 4.5 or above. In one hour while I was writing this article I was alerted to three 1.2 earthquakes close by. I decided to move my alert level up to 4.5 since earthquakes happen all the time in California.

Toolkit for Measuring, Leveling and More – iMetalBox comes from Phoenix Mobile. It’s a pretty sharp looking set of seven tools in a brushed metal and dark blue gradient interface. It contains a flashlight with adjustable brightness, and a stopwatch. It also has a spirit level, a surface level (measure the slope of anything, “such as a pool table”), and a ruler. Add in a protractor, and battery information that shows you how long your current charge will last for a list of different activities, like Game 2D, Game 3D, Video Play, 3G Talk, and why shouldn’t you get it? It’s an all in one toolbox. Could be handy in the desert if you are trying to decide how best to use the rest of your phone’s battery charge. That’s if you don’t have a Waka Waka or other solar phone charger… but that’s another story.

Lighting is the key to getting great photos in the desert or anywhere else.

Light Trac  is a great tool for all outdoor photographers.

The maker, rivolu says, “LightTrac calculates and plots the angle of Sun and Moon on top of a map, for any location. Pick any day and time and visualize the position and elevation of Sun and Moon for any location. Save multiple locations and easily switch between them. “ The app has an impressive list of features that include finding the angle and elevation of the sun and the moon for any location and time, as well as moon phases, lunations, and rising and setting times. Positions are shown in an easy to use diagram on top of a map with the angles plotted in blue, red and yellow for different times so you can plan your shot and, potentially, your trip to get the shot. LightTrac would also be useful for planning solar panel installations, for gardeners planning their sun/shade areas or to anyone interested in knowing more about the sun and moon.

Available for iOS, Android and Windows – Cost is about $5.00   –  https://www.lighttracapp.com

Most of these apps are free or have a small fee, but keep in mind there are a lot of other apps out there on the same topics. I’d suggest you look around to find the right ones for you and your smartphone. Always test using the free version to make sure the interface and the app’s actual performance work for you before purchasing the paid version. We’d love to hear about your favorite apps – for desert use or otherwise. Feel free to leave us a comment below.