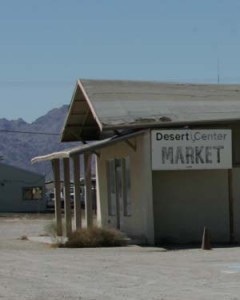 About 45 minutes east of Indio, in California, is a sleepy little town called Desert Center.  It lies between the cities of Blythe and Indio, at the junction of I-10 and State Route 177.

There are only about 150 residents living in Desert Center.  Downtown there is a post office and a café, a lot of old buildings and a few memorial plaques, giving the city a historical ambience.

Desert Center is a good central location for several places of interest. Just a short drive up the 177, you’ll find a 9-hole golf course at Lake Tamarisk, and the General Patton Memorial Museum is only a few minutes from Desert Center’s downtown.  The newest attraction in the vicinity is the Chuckwalla Valley Raceway, where they race everything from Go Karts and motorcycles to Mustangs and Porsche Cup Cars.  The raceway also owns and maintains the Desert Center Airport, which was first built in the early 1940s by the U.S. Army. The raceway is located along State Route 177 just north of the city.

Founded in 1921 by Stephen A. Ragsdale, Desert Center was the only stop with gas and food for 50 miles in either direction.

In the early 1930’s, construction of the Colorado River Aqueduct brought more than 5,000 workers to the region.  The closest medical doctor was more than 50 miles away in the town of Indio.  The need for medical care, and the large number of workers caught the attention of Dr. Sidney R. Garfield, who moved to the area and built a four-bed clinic. Kaiser and several other companies formed Industrial Indemnity to cover the workers’ job related injuries, but they were slow in processing claims. In addition, Dr. Garfield couldn’t turn away the sick and injured who had no coverage, or were not covered for their non-work illnesses. Though the workers promised to pay him, he soon realized that their payday checks were not being used to repay their medical bills. He ran out of money and was preparing to leave when Harold Hatch, an insurance agent, came up with a plan to help the doctor.  Hatch suggested that the insurance companies pay a fixed amount per day up front, rather than paying for specific claims. This system worked so well that Dr. Garfield then offered the mine workers a deal of  5 cents per week to cover all their future health care needs not related to workplace injuries.  The same amount was deducted from their paychecks to cover spouses and children.  The program was implemented, and before long Dr. Garfield’s health care business was thriving.

When the aqueduct project was completed, Dr. Garfield was invited to follow Kaiser to his next project, where he provided health care services with a team of doctors under a similar plan for 50,000 workers.  This program eventually became Kaiser Permanente, the largest managed health care program in the world.

The construction of the Colorado River Aqueduct was the catalyst for another big discovery in the region.  Geologists that had been hired to work on the aqueduct project discovered the world’s largest deposit of iron ore nearby.  Shortly after the discovery, the Kaiser Steel Eagle Mountain Mine opened operations just 13 miles north of Desert Center.  The mine was actively worked to capacity until 1983, when operations were shut down due to a decrease in demand for its products.

After the aqueduct was completed, the population in Desert Center dropped to a fraction of its previous size.  In 1942 the population numbered only 19 inhabitants.  Around this time, General George Patton set up a military training facility to prepare troops for action in the deserts of North Africa.  The camp was only open for two short years, closing when the Allies succeeded in taking control of North Africa. Today you can visit the General Patton Museum and view some of the aircraft that were deployed there.

After the troops left General Patton’s Desert Training Facility, the population once again dwindled to lower numbers. Today there are a couple of trailer parks, a golf course with low green fees (at Lake Tamarisk), a small café and a post office.  The old gas station and diner, originally established by the founder of the town, Stephen Ragsdale, still stands today.  The antique gas pumps show prices of 36 cents per gallon.  Alongside the post office is a rock with a plaque telling the story of Dr. Garfield and how the roots of Kaiser Permanente were started in the town of Desert Center. Another rock bearing a plaque about the Kaiser Steel Eagle Mine sits directly across the street, near a display of an old wagon and a red train car.

A modern project emerging out of this little town’s past is the construction of the Chuckwalla Valley Raceway from the old Army training facility’s airport.  In 2006 the Riverside County Economic Development Agency sold the airport, once a part of General Patton’s Desert Training Center, to the Chuckwalla Valley Associates, LLC.  Part of the deal was that the new owner had to develop the property over time.

Chuckwalla Valley Associates, LLC are maintaining the airport as part of a much larger plan.  They decided to build a world-class road course racing facility.  It’s called the Chuckwalla Valley Raceway (CVR), and plans include a three-course facility with a clubhouse and storage garages for vehicles.  CVR states that the development of the racetrack has had little to no impact on the environment and surrounding area.

The first track has already been built and the racetrack is open for business.  The raceway plans to add the additional two tracks, the clubhouse and outbuilding facilities in phases. Click here to read our story about the Chuckwalla Valley Raceway.