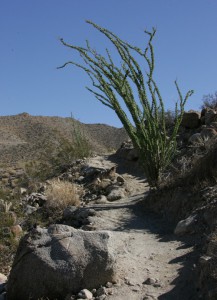 The early rain was showing in the green ocotillos and early blooms.

November arrived and brought cooler temperatures along with it.   It had been several weeks since my last hike, so I decided to take the morning off last Thursday to explore one of the many local hiking trails.

The Santa Rosa & San Jacinto Mountains National Monument has a number of trails, and several of them start near the Visitor’s Center, located at 51-500 Highway 74.  I arrived at the Center close to 10 AM.  Speaking with one of the rangers, I learned that guided hikes are offered every Thursday and Saturday in November from 9:20 am – 11:30 am (except Thanksgiving Day).  I had just missed two groups that headed out before I came.

The ranger gave me a trail map for the Randall Henderson Trail and I headed toward the trailhead after loading up my backpack with water, a camera and a few energy bars.   The guide described the trail as an “easy” 2.5-mile loop that begins at 1,000 feet and climbs to an elevation of 1,425 feet.  The trail guide estimates 1.5 hours for the loop, which was pretty accurate. I hiked it in about that amount of time. 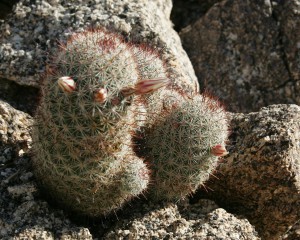 A few fishhook cacti had blooms on them.

The trail begins at the Visitor’s Center’s parking lot and heads southeast across a sandy wash, through a canyon and then climbs up a ridge to a rocky slope.  That morning a herd of Bighorn sheep were spotted towards the top portion of the trail by early morning hikers.  When I caught up with the guided hike, the ranger informed me they had encountered some fresh Bighorn scat near the trail, but that they had not seen any during their hike.

My eyes continuously scanned the rocky slopes for the elusive Bighorn herd.  I had seen Bighorns in the wild before and they blend in so well with the rock that they are almost invisible.  I stopped several times on the incline to take in the view of the valley below and to drink some water.

With the recent rains in October, the plants along the trail were starting to green up.  A handful of new ocotillos were rising towards the sun. A few blooms adorned them and some nearby chuparosa bushes.  I even saw several Fishhook cacti with a sprinkling of blooms ready to open. 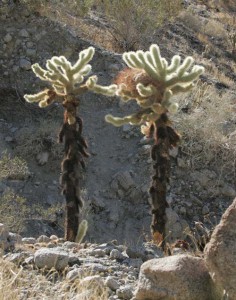 Twin chollas in the wash.

The trail guide’s notes corresponded to numbered stakes along the way that explained different features of the landscape, wildlife and surrounding views.  A family of desert tortoises reportedly lives along the trail near stake #11.  I didn’t see any the day I hiked, but the ranger said that hikers frequently see them.

The top of the trail is blocked off to protect the territory of the Bighorn sheep that live in the region.  While I didn’t get to see any Bighorns on this hike, I did see plenty of other wildlife.  Lizards were darting on and off the trail to take cover in the nearby brush.  The birds were active, especially the hummingbirds.  On my descent I saw two hummers buzzing around a blooming chuparosa bush.  I stopped to take a few shots of them – I think my close-ups look like a Ruby-throated Hummingbird. 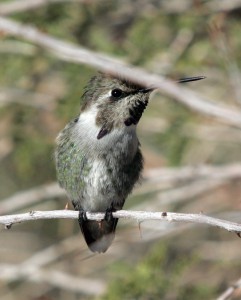 A hummer was still long enough for me to capture a few photos of him.

It was a great day to hike, and the trail was interesting as well as a good cardio workout.  I plan to return and take a few of the guided hikes along other trails this winter. Guided hikes are a great way to get out on the trails on your own, while staying safe by participating in a group.

For more information about the Randall Henderson Trail and other hikes at the Santa Rosa and San Jacinto Mountains National Monument contact: