A story in contrasts

Wildflower season is coming into its own in Southern California, and the nooks and crannies of desert and chaparral plant communities are beginning to show their flowery finery.

Whitewater River Canyon and Whitewater Preserve in Riverside County are not as well known as their more popular cousins, the Anza Borrego Desert or Death Valley, but they share the same sense of desolate beauty. 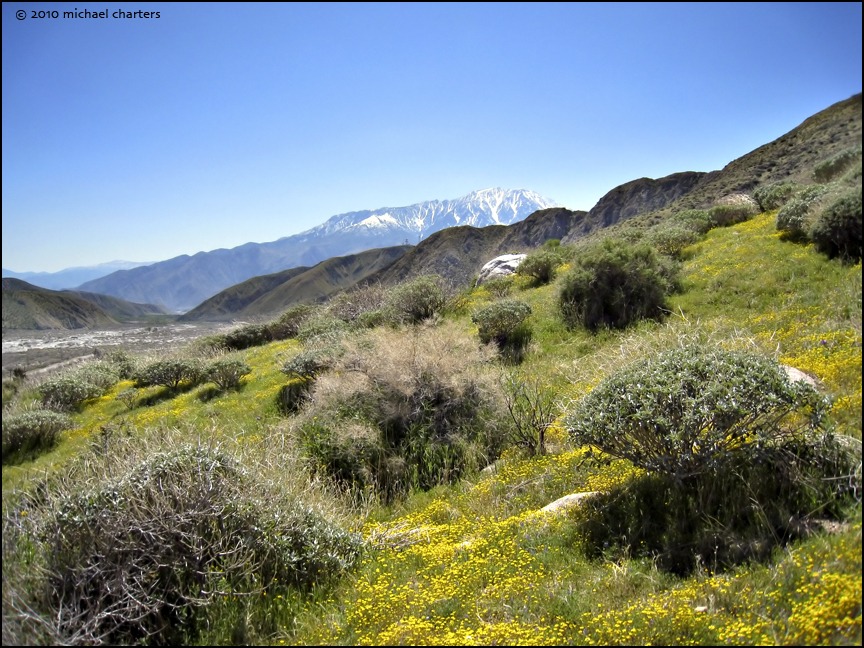 Recent rains have created a riot of yellow goldfields on the hillsides above Whitewater Canyon Road. 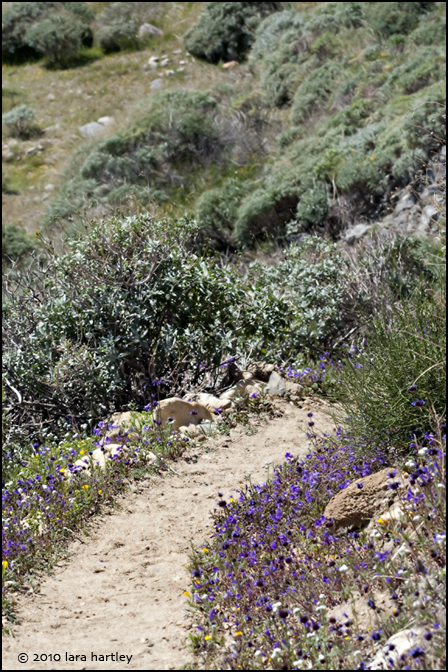 Purple canterbury bells, lavender and purple blue dicks and the carpets of goldfields line sections of the Pacific Coast Trail.

Although there is not a great diversity of flowering plant life in the canyon quite yet, what is showing is plentiful. Purple canterbury bells, lavender and purple blue dicks, and the carpets of goldfields line sections of the Canyon Overlook Loop Trail.

The Whitewater River is a small permanent stream located in western Riverside County, California, except for a small upstream portion flowing through southwestern San Bernardino County.

A common phacelia is one of the species that decorate the sides of Whitewater Canyon Road.

It has three significant tributaries: the North, the Middle and the South Forks. The North Fork begins in the subalpine zone at about 10,000′ (3,000 m.) on San Gorgonio Mountain and descends steeply southeast to the Middle Fork, which flows east through a wide arroyo. The South Fork flows northeast through a narrower wooded canyon, joining the Middle Fork lower down. The upper watershed is in the San Gorgonio Wilderness and San Bernardino National Forest, then it reaches land managed by the Bureau of Land Management. Below the confluences the arroyo is at least 1/2 mile (1 km.) wide, paved with accumulations of boulders, gravel and sand brought down by floods, and brushy except in stream channels cleared by floodwaters. Due to floods and shifting channels, there is almost no riparian forest development, except very locally along unnamed minor tributaries with relatively stable channels. 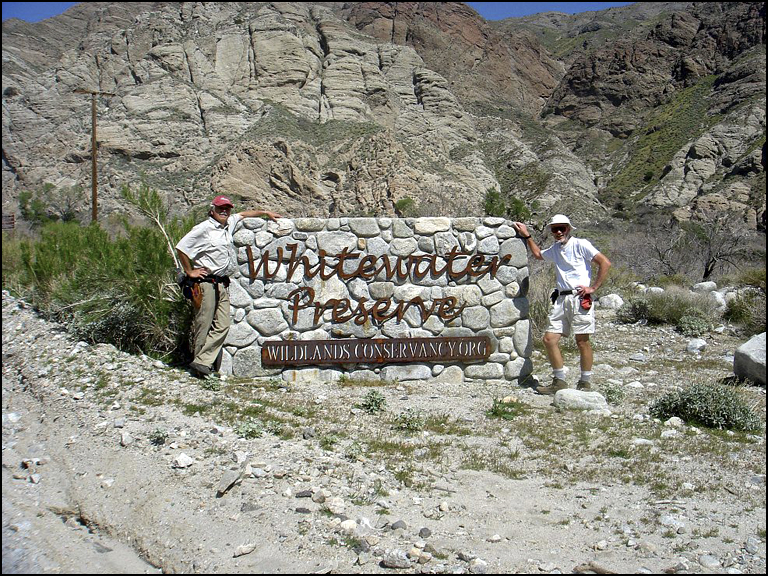 Botanists Michael Charters, left, and Tom Chester shared their vast knowledge of the local flora on a hike with me in the hills above the Preserve. Being with these two experts was a treat. I love traveling with real scientists because they tell me what flowers I am photographing.

The Whitewater Preserve is 2,851 acres surrounded by the Bureau of Land Management San Gorgonio Wilderness and is part of the Wildlands Conservancy’s 33,000-acre Sand to Snow Preserve System.

The year-round Whitewater River runs through the preserve, and its riparian vegetation provides habitat for the endangered southwest willow flycatcher and the bell’s vireo, as well as opportunities to see migrating birds, including summer tanagers and vermilion flycatchers. The canyon has a robust population of bear, deer, bighorn sheep and mountain lions.

Whitewater Canyon is an important wildlife corridor between the San Bernardino and San Jacinto Mountains. The lower canyon is a living laboratory of evolution where mountain, inland and desert species hybridize. In addition to acquiring the 2,851-acre Whitewater Preserve, The Wildlands Conservancy purchased an additional 3,200 acres in the Whitewater corridor that were donated to the Bureau of Land Management.

These lands include endangered fringe-toed lizard habitat at Windy Point and the confluence of the Whitewater and San Gorgonio Rivers. 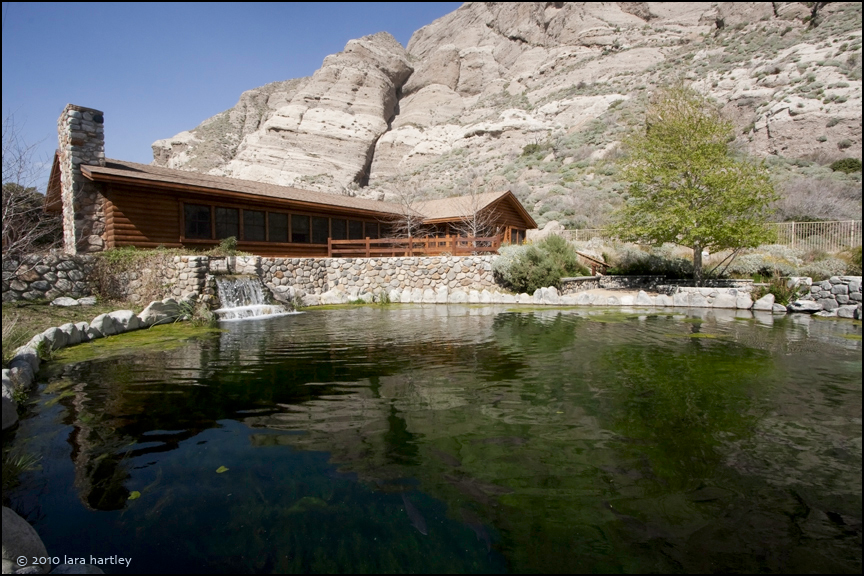 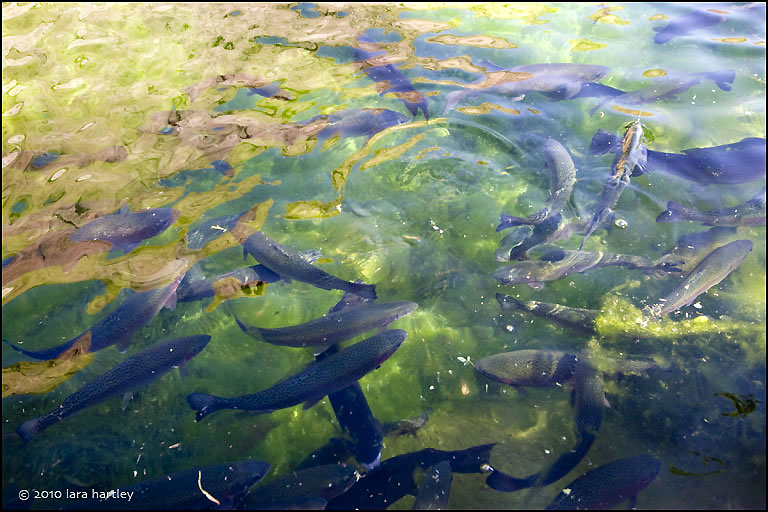 Swirls of algae and fish create a magical scene at the Preserve’s fish ponds.

The Wildlands Conservancy restored the lodge at the former trout farm for a visitor facility and developed a picnic area, group campground, and a trailhead that is only a half mile from the Pacific Crest Trail in the San Gorgonio Wilderness. Facilities are open to the public without charge. The picnic area and ponds are overshadowed by steep vertical cliffs where bighorn sheep thrive along with numerous raptors. Fishing is limited to organized catch and release fishing programs for youth. The preserve’s proximity to the Coachella Valley makes it ideally situated for outdoor education programs.

Directions:
From I-10 take Whitewater exit, turn north, then left on Whitewater Canyon Road. Travel five miles. The Preserve is located at the end of the road.

The Wildflowers at Whitewater Preserve