Art on the Rocks

Inscription Canyon is a major anthropological attraction in the High Desert 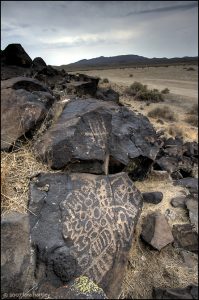 Stand in the quiet of Inscription Canyon and let your imagination take wing. Close your eyes and you can almost see the Indians who used to inhabit the area, waiting for visions fueled by fasting and sacred drugs — their prayers wafting skyward on smoke from their fires.

They dreamt their mystical reveries and left their shamanistic art to mystify those who came later.

We don’t know exactly who they were “as several tribes claim this as their traditional homeland,” says Jim Shearer, Bureau of Land Management archaeologist.

Larry T. B. Sunderland , anthropologist and historian, attributes the rock art to “Western Shoshone, Southern Paiute, and Kawaiisu,” in his book “Prehistory and History of the Timbisha Shoshone.”

Today, a visit to Inscription Canyon offers an opportunity to view hundreds of petroglyphs — some of which are estimated to be up to 10,000 years old.

Big horn sheep, snakes, anthropomorphs (human-like figures) and a large variety of geometric graphics adorn the walls of the canyon which runs southwest-northeast and is only several hundred yards long. 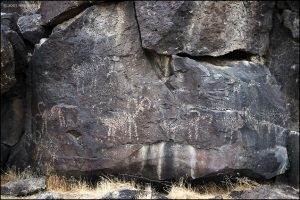 Bighorn sheep are depicted with some similarity to the bighorn petroglyphs in the Coso Range to the northwest.

“Several different styles of bighorn sheep petroglyphs are seen here, states avocational archaeologist Donald Austin on his fascinating Web site PETROGLYPHS.US. “The use of different depiction styles indicates people of different cultures visited this canyon and a noticeable difference in repatinization of the petroglyphs indicated they did so over a long period of time.”

Ancient lava flows created a perfect canvas for the rock art, the meaning of which has been lost in antiquity.

“We cannot interpret them because we are not of the culture that created them,” said Bob Hilburn, BLM volunteer site steward who is also the vice president of the Mojave River Valley Museum.

Unfortunately, many petroglyphs are marred by graffiti and peppered with bullet holes. Large segments of rock drawings have also been destroyed in attempts to chisel them off. 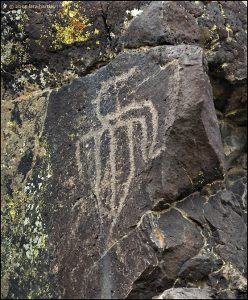 This bird-like petroglyph is thought to be composed of three different drawings.

Even touching the lithic art can blemish it over time, said Hilburn. “Oils from our hands can damage them and the presence of those oils could taint future studies as science discovers new ways to age and interpret the glyphs.”

Recently the barricade into Inscription Canyon was illegally unbolted so it could be moved for vehicle access into the canyon. There was new damage to the site in 2007, including a name that was added. A member of the public notified Shearer that three people were seen in the canyon with crowbars.

Hilburn said, “Once the petroglyphs are taken from the site, their possible meaning is totally lost because it is tied to where they were in relation to the sun, moon and planets.”

“There are two kinds of looters,” Shearer said. “Those who are naive who don’t know they are breaking the law, and those who know what they are doing [is illegal]who dig up bottles in historic trash dumps on federal land.

“I really want to educate people that they are breaking the law,” said Shearer.

Artifacts — anything that was created or modified by humans more than 50 years old — are protected by The Archaeological Resource Protection Act, ARPA. And that includes boulders with petroglyphs on them. There are severe consequences for those who collect artifacts including tins cans, old barbed wire and stones that were flaked to make tools by prehistoric peoples. 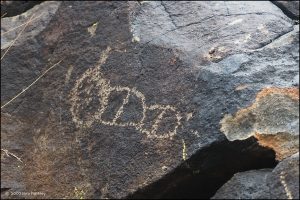 A bug-like petroglyph is found in the nearby Black Canyon, home to thousands of examples of rock art.

Possible penalties for looting, a felony, under ARPA include five years in prison, fines not to exceed $100,00 and seizure of vehicle and property associated with looting the site.

There is a fine line between closing historical sites to protect them and giving the public access to their cultural heritage. The actions of a few, selfish individuals can mean the closure of these sites to the general public.

Once they are destroyed or stolen, the priceless petroglyphs from our Mojave can never be replaced or repaired and we all are poorer for their loss.

If you go, be sure to follow normal desert driving precautions. Carry lots of water, at least a gallon a person per day and take more than one vehicle. The dirt road is two-wheel drivable but there are a couple of patches of very soft sand to navigate.

Take only photographs, leave only footprints. 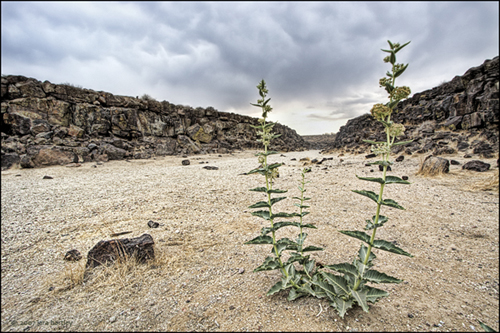 A desert milkweed seems to be guarding the entrance to Inscription Canyon.