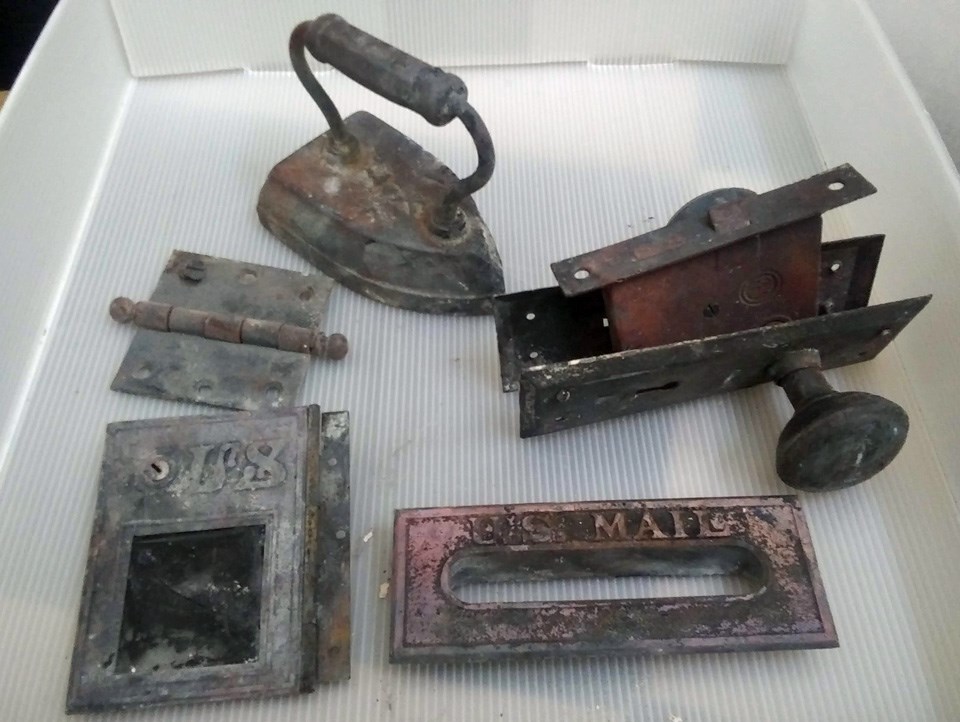 Many historical items have been retrieved from the burned structures.
NPS

BIG BEND NATIONAL PARK, TX – Fire crews have contained the Castolon Fire, which burned along the river in the western part of Big Bend National Park. While there were lost structures, incredible work was done to protect and preserve numerous historic buildings and artifacts.

On May 22nd, a wildland fire that began the previous day in Mexico jumped the Rio Grande and started burning within Big Bend National Park. Wildland and structural fire fighters from the park responded, and were on scene when an abrupt wind shift quickly brought the path of the fire directly towards the Castolon Historic District. High winds washed the area with embers and multiple structures caught on fire. Park fire crews, with help from Terlingua Fire & EMS, were able to save all but the historic latrine (public bathrooms) and barracks (La Harmonia Store and Castolon Visitor Center). The historic Officers’ Quarters, Magdalena House, Garlick House, Alvino House, recreation hall/granary, and guard shack were all critically threatened by this fire, but ultimately saved.

Over the next few days, driven by strong winds, the fire continued to burn on both sides of the river. Park staff, the international Los Diablos crew, and Texas A&M Forestry Service crews were able to successfully defend the popular Cottonwood Campground, employee housing area, Old Castolon buildings, La Coyota ruins, wells, pumps, power lines, and other important resources. Over this period of time, shade temperatures were recorded at 109 degrees, with single-digit humidity.

As of June 1st, the fire was 100% contained at 944 acres (797 U.S. / 147 Mexico). Earlier estimates placed the size around 1,280 acres, but this number was refined with more detailed mapping. Pockets of heat still remain within the burned area, and the park expects this to be 100% controlled (out) by next week. Part of the Los Diablos fire crew remains on site, conducting fuels reduction and hazard-tree work while on standby.

“Although damaged, Castolon remains a rich remnant of Big Bend’s pioneer and military past, and represents the mixing of cultures along the border.” said acting Superintendent Tom VandenBerg. “In spite of losing so much, we are forever grateful for all the facilities that were spared.”

In the days after the loss of the La Harmonia store and visitor center, park resource staff and G4 Heritage Consulting sifted the debris to save many historic items. Artifacts retrieved include the two cast iron stoves, La Harmonia stencil that once marked cotton bales, the La Harmonia Store sign that hung above the doorway, the old post office doors and grate walls, the iron used by Magdalena Silvas, and numerous other architectural items like doorknobs and brackets. Over the upcoming weeks and months, park management will be evaluating options for restoring visitor services to the area and long-term plans for the historic district.

The Ross Maxwell Scenic Drive has reopened, but the Castolon Historic area will remain closed. No services are available in the Castolon area. Cottonwood Campground will not reopen until fencing and other facilities can be repaired. As these places reopen, we urge visitors to stay out of recently burned areas as these can be quite dangerous. Burned stumps and roots leave pockets under ash that can collapse under foot. Snags are liable to naturally fall over the next weeks and months as the ecosystem recovers. We thank the public for their understanding of these closures for their safety.

Big Bend National Park extends their gratitude to the firefighters for their hard work, as well as to the public for all the outpouring of support to park staff and on park social media.