Chance meeting with a cowboy 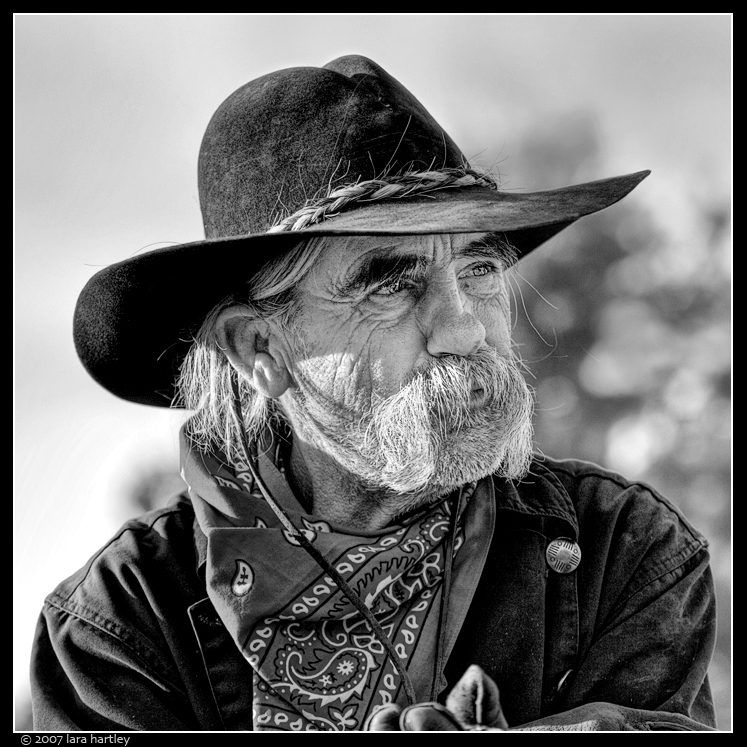 “Darlin’, you just made my day.” The cowboy tipped his hat and turned his horses to the setting sun. Gold glints silhouetted them briefly and made my eyes tear.

A bad spaghetti western? A Louis L’Amour novel? No, just a chance meeting near Baldwin Lake in the San Bernardino Mountains of Southern California.

I was coming down the road when I saw this handlebar-mustached cowboy riding towards me — a-straddle one horse and leading the other. There was a sheathed buck knife on the saddle and a bed roll tied onto the back of his horse.

Leaning out the car window, I said, “You are too cool.” His clothes were not a dude’s idea of cowboy attire, but the real thing. On his head sat a black, beat-up cowboy hat with a horse-hair band. A hollowed out piece of antler acted like a clasp holding the ties together. A red, cotton scarf loosely knotted around the throat suited the gentleman to a “T”.

Ted Herubin has far-away blue eyes that have seen too much and perhaps suffered too much. He has multiple health problems exacerbated by the dust in Lucerne Valley, his home. To give his lungs a break, he rides his horse, Chief Long Wolf and leads pack mare, Miss Texas for a two week stay in the clean, Big Bear air. I asked what else he was doing up here. “Fishin’,” he said.

He said, “I’m a fisherman, a prospector and a horseman, ma’am but not a womanizer.” And he assured me he actually catches fish, those blue eyes sparkling all the time.

Herubin exists on a small military pension from his time served during the Viet Nam war. He recently had a heart attack and has not been able to drive since 1995. He rides his horses where he wants to go and that includes the San Bernardino mountains for a fishing trip. He said, “I used to live up here and I want to come back. Maybe live somewhere as a caretaker.” He knows the pure air would be good for his health.

Finally the talking and flirting had to come to an end. Time to go home for me and time to retire to a campfire for Ted.