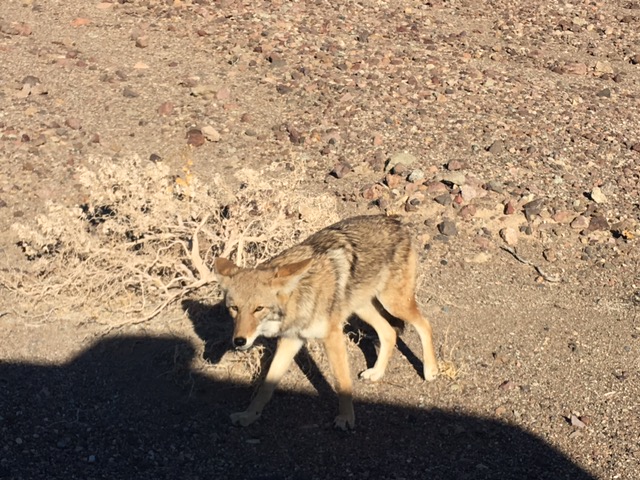 A few days before this coyote was accidentally killed by a vehicle, it was photographed approaching a car window.
NPS photo by Jessica Barr

DEATH VALLEY, CA – A coyote that habitually approached cars died after being struck by a vehicle on Artists Drive in Death Valley National Park on November 26. This adult female coyote was just the most recent casualty of human-coyote interactions in the park.

Park rangers educate visitors not to feed coyotes or other wildlife. Park rangers prefer to educate people who illegally feed park wildlife, but do occasionally issue citations. With 1,700,000 annual visitors, educating all of them is difficult. After just a few people fed a coyote, it learns to associate food with roads, cars, and people.

Educating the coyotes is also difficult. Park rangers hazed the Artists Drive coyote with loud noises and by throwing rocks in its direction (without hitting it). Rangers are still regularly hazing another coyote that is stopping traffic near the junction of CA-190 and Badwater Road.

“A fed animal is a dead animal,” said Chief Ranger Rob Wissinger. “Coyotes are smart. They know how to look pathetic and trick people into feeding them. But if they get accustomed to getting food from humans, they can become dangerous to pets and humans.”