Desert Living Series
Critters in the car.
by DesertUSA.com

If you’ve lived in the country on a rustic ranch or farm, you’re probably familiar with the damage that mice and rats can create in your home or in your car.  One common problem is rodents nesting in a car engine or in air conditioners.

My folks live on a ranch in a semi-arid region of Southern California.  They’ve seen many critters over the years at their ranch, some in their house, and others in the barn where they park their car and tractor.

Just yesterday my dad went to turn on his car air conditioner and the fan started to make a strange vibrating noise.  He’s sure that a mouse or rat crawled into the system and chewed apart his fan.  It must’ve died in there because his car now smells like a dead rat.  After peeking under the hood and thinking about the air conditioner noise, he’s determined that the rodent must be in the air conditioner vents. This is probably a job for a mechanic. It’s also probably an expensive task.  He called for some estimates and spoke to an auto mechanic. The mechanic explained that they use small cameras to look into the vents of the car to determine where the dead rodent is.  Then they take apart the car to get to the rodent.  The quote he got was for around $400-$900 from the mechanic at a Shell station.  The dealership would surely charge more.

The mechanic warned my dad on the phone that he should take care of the problem soon, otherwise maggots will get in there and the carcass will be crawling with other critters.  As my dad pointed out, while the maggots are not a pretty site, when they are done with their meal the smell will probably be gone and most of the rat will disappear along with the maggots. After years of trapping mice in the house and other areas, this was not a big deal to him.  What concerned him was that if nature takes it course and the maggots clean out the vent, he will still have to deal with the issue of the vibrating fan.

Smartphone to the rescue. He didn’t have a good way to see into the fan area, and there wasn’t even enough room to put a hand in there. He did have enough room to insert his iPhone into a slot above the fan in the engine compartment. He took a picture and found the problem. Then we bought a long retrieving tool for $10.00 and extracted the mouse. The picture made it possible to see where the problem was, then it was just a matter of getting the rat out. 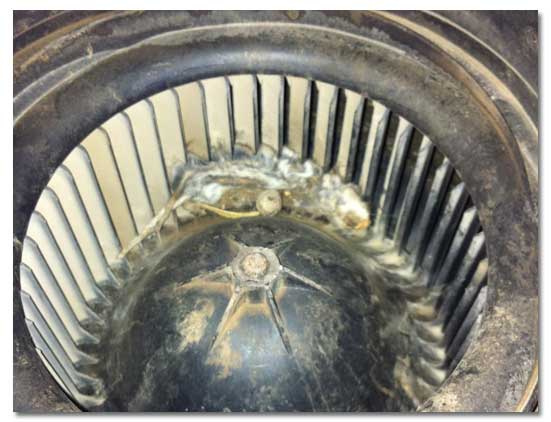 A view of the fan. 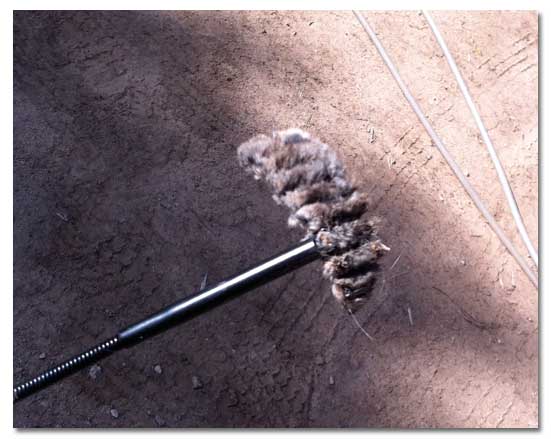