Check with Joshua Tree National Park to confirm road is open and that there aren’t any restrictions.  Per the National Park Service: Backcountry roads require advanced planning, ample water, and the ability to self-rescue.

Click on the link to view a video of the Old Dale Road Trip.

Old Dale Road can be accessed from Pinto Basin Road, 6.9 miles north of the Cottonwood Visitor Center, at the same point where the Black Eagle Mine Road begins. All of these roads are marked on the Park map, which is distributed free at all visitor stations.

We began our adventure down the washboard dirt road into the Pinto Basin. On both sides of the road, plant life was abundant. I spotted Creosote, Pencil Cholla, numerous Smoke Trees and an occasional Beavertail Cactus. I was surprised to see so many plants in bloom in December. In the desert, no matter what month you visit, there is always something in bloom, but the yellow, white and green colors that filled the roadside were more than I had expected.

As we traveled further into the Pinto Basin, the dirt road turned from a washboard surface, to fairly deep sand. Sections of the road passed through sandy washes bordered by Smoke Trees and Desert Willows.

On the right side of the road, as we passed through Pinto Wash, we came upon a landmark sign for Mission Well. The Well was drilled in 1934 to provide water to the mines and mills in the nearby area. The foundation and other ruins from the well still remain in fairly good condition. 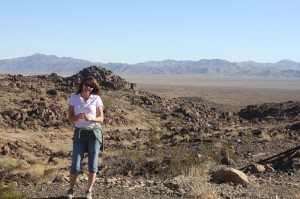 Photo of author on Old Dale Rd. with a view of the Pinto Basin below.

Not far from Mission Well, we came upon another abandoned mining area on the left. There were large, rusty barrels that may have been used as cyanide vats to separate the gold from the ore. Crumbled foundations and interesting rocks scattered the area. I climbed up to the top of the hill and stood on an old foundation. The views of the valley below were incredible. 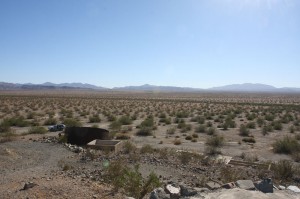 The view from an old mill site near Mission Well.

After Mission Well, we began our ascent into the Pinto Mountains where the Colorado Desert transitions into the Mojave Desert. At this point, we were leaving the park and entering BLM land. The road here was treacherous in areas and the slope steep. This road requires 4WD and is not an easy route. Rock-filled ravines below the road held old rusted cars and mattress springs, remnants of the Old Dale Mining District.

As we began our ascent into the Pinto mountains we can upon an abandoned cabin in fairly good condition. Whoever occupied this particular building, perched high up above the valley, must have enjoyed the breathtaking view of the Pinto Basin below. In 2008, someone painted an American Flag on the side of the cabin. Some campers used one of the old foundations as a campfire spot. The edge of the foundation created the perfect bench to sit and take in the amazing views of the Pinto Basin below. 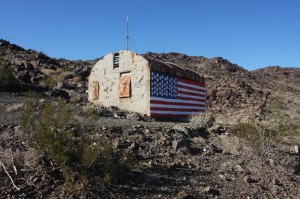 The old cabin with a flag painted on the side.

As we continued up the rough road we wondered how long it would be before the road flattened out again. Turn after turn revealed more rocky slopes that required 4WD. It is a tedious journey so be prepared to bounce around. The roughest part of the road takes at least an hour or so to navigate through. At the top of the peak we were able to get cell reception, but that was only for a short time. The cell connection disappeared as we began our descent into the Old Dale Mining District along Gold Crown Rd.

From here the road leveled out and we encountered another mining ruin where we found an old dump full of rusty cans and old car parts. Only the foundation and part of a wall remained, but many other interesting items lay scattered about the area. The vegetation here seemed more characteristic of the Mojave Desert, and we encountered Ratany, Indigo Bush and Mojave Yucca, all in full bloom.

The sun was starting to set and the town of Twentynine Palms could be seen in the distance. The road was once again a hard, washboard surface with some sandy stretches. I was glad to leave the rough, 4WD slopes behind as we sailed smoothly through the sandy washes back towards civilization. 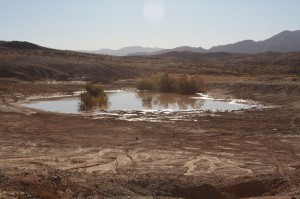 As we exited the mountains we came upon a shallow pond created by the recent rains. It is so rare to see water in the desert. We stopped to take a few photos. I wondered how many days it would take for the water to evaporate? I’m sure it would only last a few days. The arid desert would take in the water quickly, leaving behind little evidence that a pond ever existed there.

It was during the final leg of our journey that we passed by the Virginia Dale Mine. A few rusty cyanide vats, tanks and mill equipment remain at the site. There were a few old foundations, crumbled walls and other building rubble. The Mine was active in the early 1880s, but never produced much ore

The Dale Mining District including a handful of gold mines and two camps, the Virginia Dale and Old Dale, produced close to a million dollars between 1900 and 1915. It is unknown what the production costs to mine the gold ore that generated that amount of money. As the cost of supplies and labor rose the price of gold remained steady and the cost to mine exceeded the money produced. It wasn’t enough to justify the continuation of mining in the area and the area fell quiet as we entered into World War I. There was a short revival of mining in the 1930’s during the Great Depression, but again the Dale Mining District became a ghost town and a part of the area’s history. 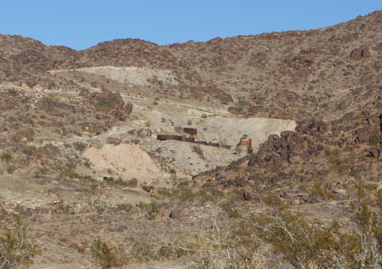 The ruins of the Virginia Dale Mine in the distance.

This is a great trip if you have the right vehicle. Make sure you pack plenty of food and water as it will take you several hours to traverse the Pinto Mountains with several stops along the way. Make sure you head out early so you don’t get stuck on the mountain when it gets dark. This is a rough road and you don’t want to navigate it in the dark. Happy trails.