NOTE: Change in Operations and Temporary Closures due to COVID – In support of the CDC, state and local public health authorities, Joshua Tree National Park is modifying operations. All campgrounds are closed and all programs are suspended.
Expect Large Crowds at Popular Locations – Consider using the North (Twentynine Palms) or South (Cottonwood/I-10) entrance stations as alternative park entry points. Parking at popular areas may be full. Be prepared to visit alternate areas & avoid idling while waiting for a parking space to open.

One of my favorite things about visiting national and state parks is the transformation that occurs when you cross over into the park’s boundaries. As the landscape takes on a new form, I feel I’m entering into another world. Joshua Tree National Park is most definitely one of those magical places. The sharp angles of the Joshua tree forests are the foreground to a wonderland of gigantic granite boulders and rock outcroppings. It’s an otherworldly landscape that takes you back thousands of years. You feel you might see a dinosaur step out from behind one of the Jumbo Rock piles at any moment. 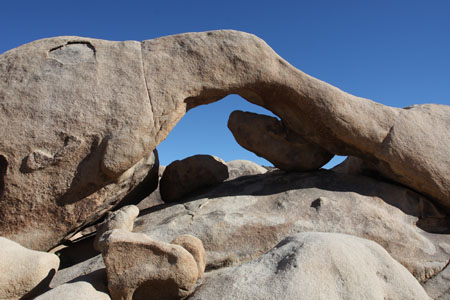 From the Visitor Center at Cottonwood Springs, it’s approximately 27 miles to the White Tank Campground and the Arch Rock Nature Trail. The White Tank Campground has picnic tables and grills at each campsite. Most of the campsites are surrounded by huge boulders, and a few have views of the surrounding valley. Near the entrance to the campgrounds there are several bathrooms with pit toilets. Neither showers nor water are available at this campground. There are 15 sites at an elevation of 3,800 feet. 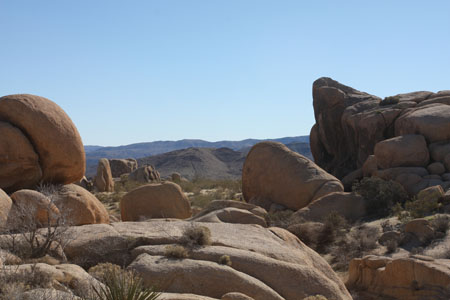 View of the landscape at White Tank Campground. A wonderland of boulders to climb and explore.

The Arch Rock Nature Trail starts at White Tank Campground site 9. From here, you can follow the .3-mile loop, where interpretive panels along the path describe points of interest and geology found in the area. The highlight of this trail is the well-known granite rock formation named Arch Rock. To enjoy a good view of the arch, you need to scramble over some granite rocks at its base and position yourself well. After climbing up some low boulders, I was able to get a good view and take pictures of Arch Rock. There are many other photo opportunities as well; if you decide to take a side trip you can hike to the White Tank itself, built by cattlemen in the early 20th century. 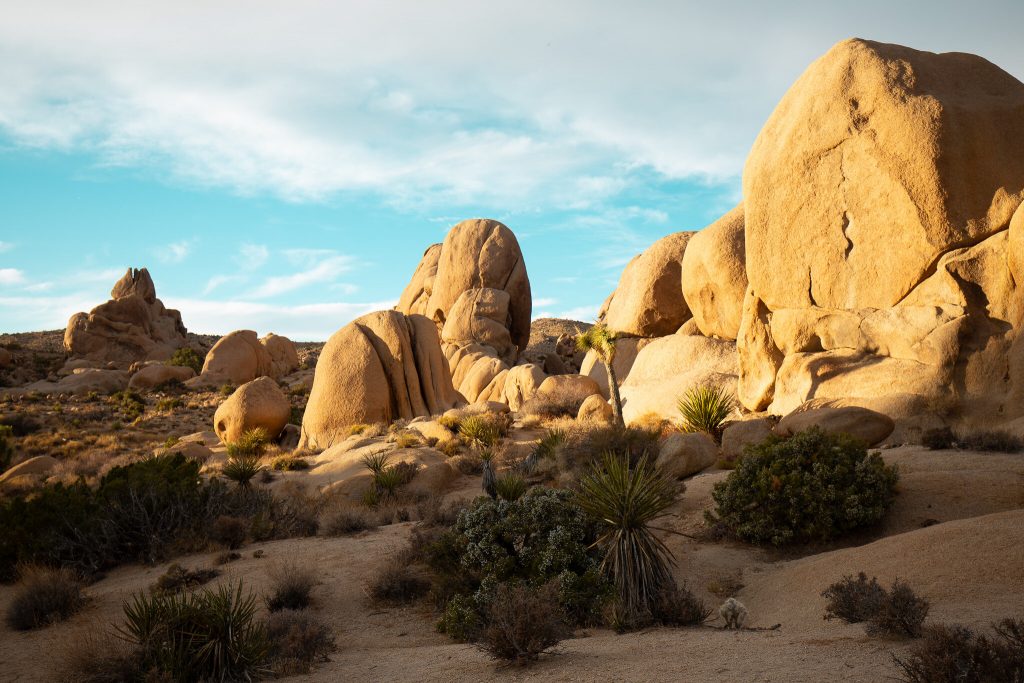 The boulder formations at Joshua Tree are forever changing. Over time, water seeps into cracks in the granite, softens hard mineral grains into clay, and slowly, new boulders break off into separate pieces. The new boulders either wither away with time or fall away from the original formation. Arch Rock will eventual erode and break apart, destroying the arch, but creating a new formation in the process. Other arches may form in other rocks and with time we may have a new series of rock formations that we will name, and make new points of interest in the park. 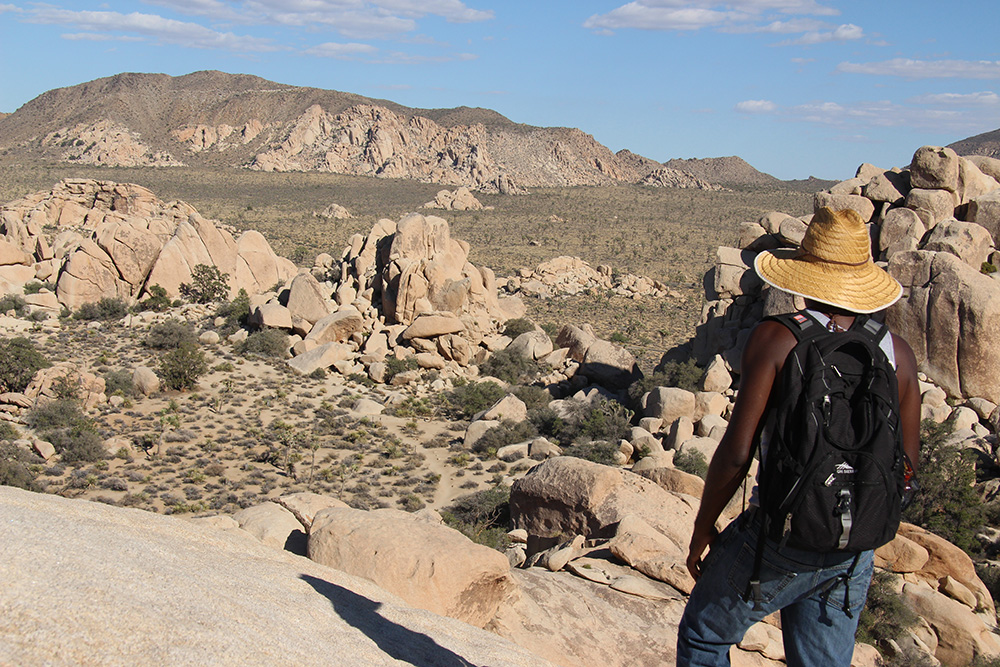 My next stop was Skull Rock, probably one of the most photographed rock formations in Joshua Tree NP. It’s accessible from Park Boulevard or from a nature trail that starts at Jumbo Rocks Campground. I parked along Park Boulevard and could see Skull Rock from the road. Walking a few hundred feet to the formation, I photographed its distinctive shape from a few different angles. The impressions in the rock that form the eye sockets in the skull shape are called tafoni (singular: tafone). A tafone is a small cave-like feature or honeycombed pockmark in a rock’s surface. Rainwater accumulates in these impressions and bit by bit, erosion occurs and the tafoni become deeper. 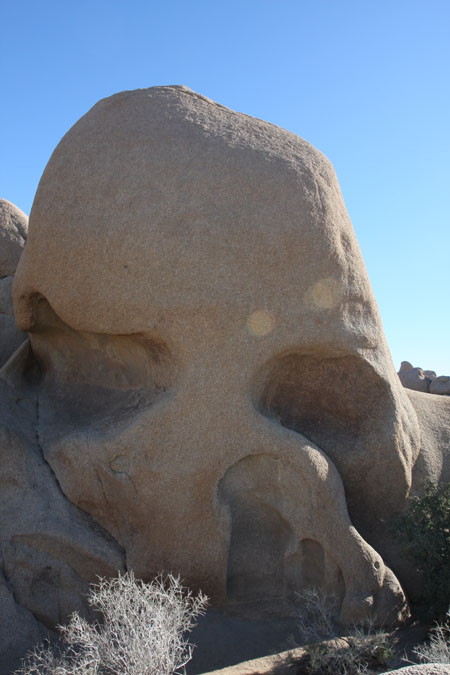 Near Skull Rock lies the Jumbo Rock Campground, with 124 sites at an elevation of 4,400 feet. A quick drive through the campground revealed numerous campsites tucked between boulders. The Skull Rock Nature Trail, an easy .24 mile path with interpretive panels explaining points of interest and flora in the area, can be accessed from this campground.

If you continue along Park Boulevard, at the junction of Keys View Rd., you’ll see the Cap Rock formation and parking area. Cap Rock is easily visible from the parking lot. The formation is named after the flat rock that’s perched at its top. The “cap” will eventually wither away or fall off the configuration as the erosion process continues. The Cap Rock Nature Trail is a wheelchair-accessible .4 mile loop. I was on my way to Hidden Valley and it was getting late, so I didn’t explore it. The scenic trail weaves between the boulder groupings and includes interpretive signs along the path. 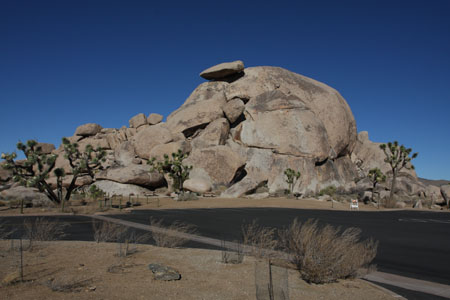 View of Cap Rock taken from the parking lot.

The next and final stop on my journey was Hidden Valley, a popular spot for park visitors and rock climbers. The parking area provides access to the Hidden Valley Nature Trail, a 1-mile loop that winds through the rocks into a secluded valley surrounded by boulder formations. I forgot to look for the rock titled “The Trojan” when I was walking the loop, so I missed it and wasn’t able to get a photo of it. The sandy trail meanders and pinyon pines spot the landscape alongside the boulder formations. Local desert lore includes a story about two outlaw brothers, Charlie and Willie Button, who supposedly used Hidden Valley to hide cattle they stole from Arizona. They later re-branded the cattle and sold the animals to ranchers in California. I could see how horses and cattle could be hidden there. It’s a secluded valley with boulder formations surrounding the perimeter from all sides. 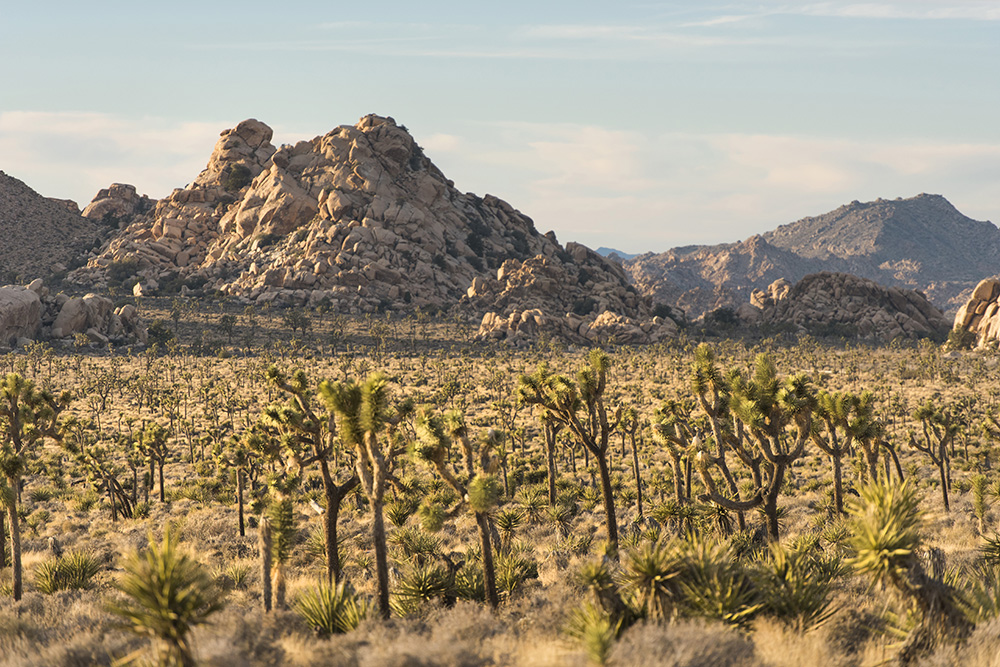