In California, the original Route 66 is known as The National Old Trails Highway. It runs from the Colorado River west of Needles, CA through Goffs, Essex, Danby, Chambless, Amboy, Ludlow, then on to Barstow before reaching Los Angeles.

Update 02/14/18: Portions of Historic Route 66 are temporarily closed for repairs.

View a map of the closures here.

I decided to take a day trip to visit a short stretch of Historic Route 66. Just north of Twentynine Palms and Joshua Tree National Park lies a part of the National Trails Highway (formerly known as Route 66) that leads to the towns of Ludlow, Klondike, Bagdad, Amboy, Essex, Fenner and Goffs. 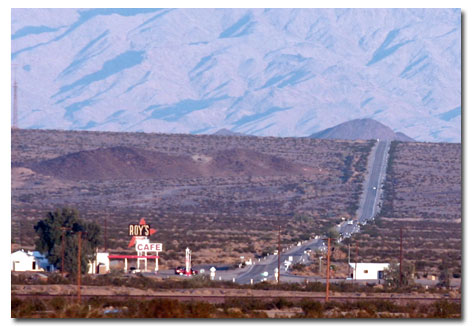 It was my first time driving on Route 66 and I was excited to experience a part of American history. As I turned onto the highway I wondered why Route 66 was so famous? What has made Route 66 so different from other highways? After my trip, I did a little research to learn more about the history of Route 66 and the story behind the near-ghost town called Amboy.

Route 66 was an American icon, and also a way of life for many local residents along the highway, who provided food, gas and lodging services to the motorists who passed through their towns. This 2,300-mile route brought travelers from Chicago to Los Angeles and back again from 1938 until 1985. Route 66 was not just another highway, it was part of American culture, and a well-remembered colorful part of our history. There have been songs written about Route 66, a television series called Route 66 and many stops along the way have been the backdrops of movies and music videos. Even today, fascination with Route 66 continues to thrive. In fact, during my visit to Roy’s Café, there was a rock group from Holland filming a music video in front of the bungalows there. 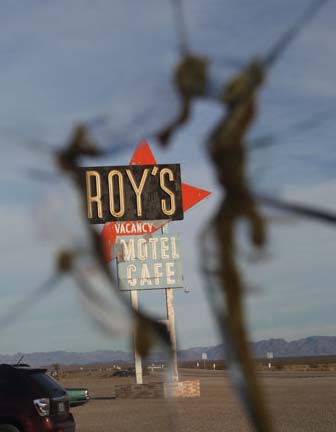 The cracked window in Roy’s Cafe has been fixed recently.  It was a trademark of the Cafe for many years.

What happened to Route 66? In 1956, the Federal Aid Highway Act was passed, and plans for a national interstate highway program were initiated. This program created new interstate highways and Route 66 slowly became part of the past. While Route 66 was still intact, it was no longer the only route to travel across its stretch of the country. In 1985, the department of transportation built Route 40, creating a shortcut between Needles and Ludlow. The shortcut rerouted traffic from Route 66 to Route 40 and the towns along this section of Route 66 became ghost towns. Businesses had to close and residents moved away.

Today, empty gas stations, abandoned churches and other reminders of what “used to be” mark the Route as you tour down memory lane. You can still drive on sections of Route 66 and see many of the historic points of interest that helped make it so famous. If you decide to visit one or more sections of Route 66, make sure you get some good maps and information before you go. The Historic Route is not well marked and it takes some planning.

The Town of Amboy and Roy’s Café

Amboy, a small town that developed and supported Route 66 tourists, was a busy gas, food, and lodging stop. In its heyday, Amboy was home to 800 residents, a post office, a school, an airport and the famous Roy’s Café and Hotel, which employed 70 people at its height. The story goes that people would fly into town just to get one of Roy’s Route 66 Double Cheeseburgers. Roy’s Café and Hotel was one of the best-known stops along Route 66, partly due to its colossal sign, and was a favorite backdrop for many Hollywood directors.

Today, the nearly deserted town of Amboy still has a few residents . . . less than 10 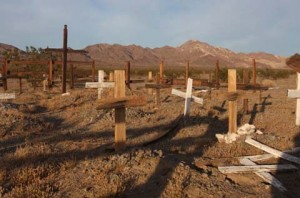 since 2000. Amboy was  purchased by Albert Okura for the amount of $425,000. Okura’s plans are to restore parts of the town, including Roy’s Café and the gas station. A 20-room motel and six bungalows are also to be rehabilitated in the future. The aim of the restoration is historical as well as commercial – a cracked window in the Café featured in many films was replaced. The store is open, and though they are not serving food yet, they are selling souvenirs. There is an old cemetery, a church and a post office nearby – all closed now – but the grave markers remind us of the history and the residents who used to live there. 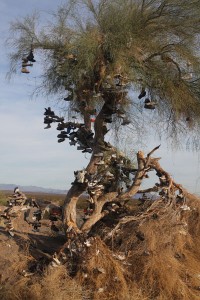 After my stop at Roy’s I continued east on Route 66 and didn’t get far before I found myself pulling off to the side of the road. There was a tree on the south side of the highway that was filled with shoes. People had tied pairs of shoes together and thrown them up into the tree. This was one of two “shoe trees” that I saw along the road after leaving Roy’s. This particular “shoe tree” is just a few hundred yards down the road from Roy’s. There are hundreds of pairs of shoes hanging from the branches of this lone tree. It stands along Route 66, intertwined into the history of the highway. I wondered how old some of those shoes were and who started the shoe tree?

If you have time for a brief excursion, take a few minutes and stop at Bristol Dry Lake. Located just three miles east of Amboy, Bristol Dry Lake is an active salt mine. There are approximately 60 million tons of salt in reserve there. You have to stop and walk out on the dry lake to really see the halite crystals and how they form on the surface of the ground. I picked up a chunk of the white, crusty halite layer and tasted it. Yes, it tasted like salt.

For more information about Bristol Dry Lake and the salt that is mined from it, please visit our information page on DesertUSA.com 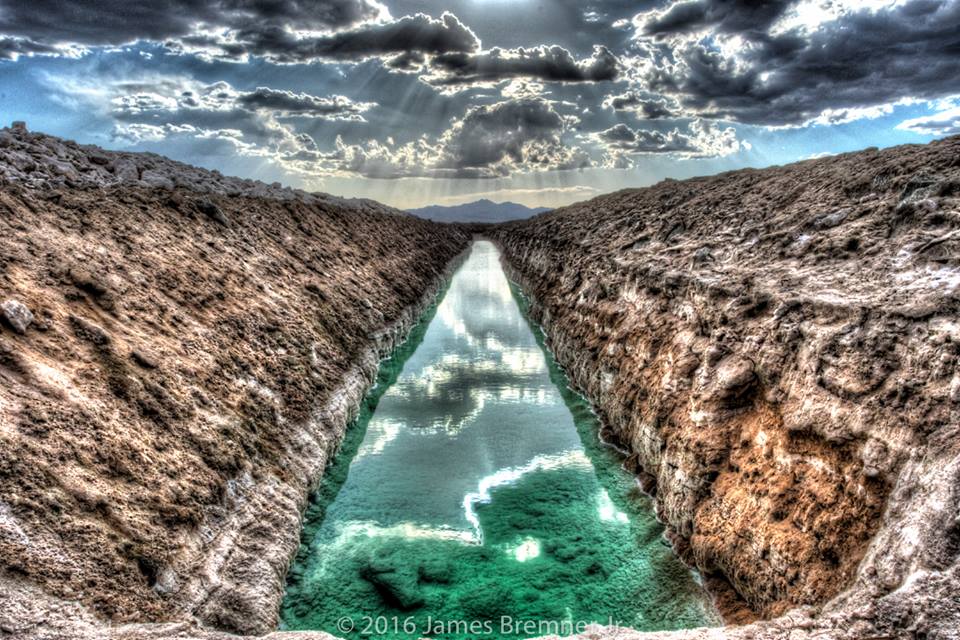 On the return trip I passed by Roy’s once again and took a few more photos, then promptly headed out towards Amboy Crater. It was late in the day and I didn’t have time to hike into the basin. Late afternoon was a nice time of day to take a few photos and enjoy the quiet surrounds. There was only one other car in the parking lot and I didn’t see anyone nearby. They were probably hiking inside of the crater.

Amboy Crater and Lava Field, an extinct cinder cone crater, is located in the Mojave Desert near the town of Amboy. The black lava rock that forms Amboy Crater rises up from the landscape and can be seen from miles away. It is a National Natural Landmark that is managed by the BLM. 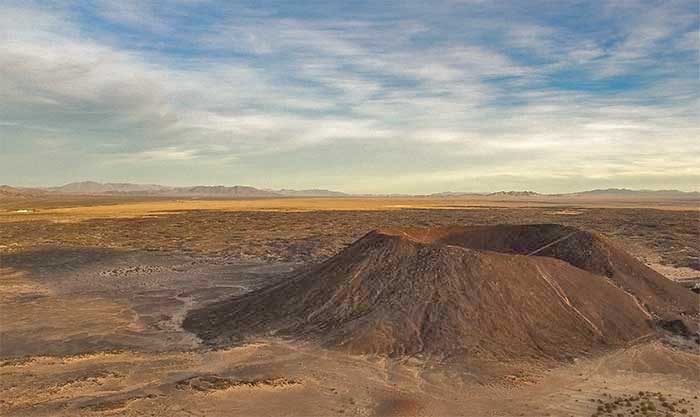 Amboy Crater and Lava Field was the only volcano along Route 66 and therefore a popular tourist stop over the years. Take Route 66 and climb a volcano! Just another reason Route 66 was so unique. The points of interest along the highway were all part of the recipe for a uniquely American experience.

For more information on Amboy Crater, directions on how to get there and information about hiking the related trail, please visit our information page on DesertUSA.com.  We also have a story about the area. 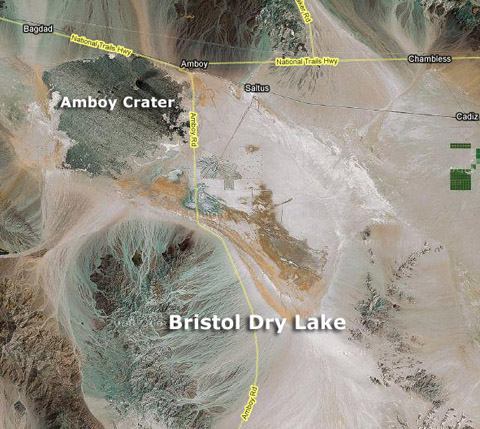 The History of Goffs
The Goffs Railway Depot Route 66
100th Anniversary of the Goffs Schoolhouse
Dennis Casebier, The Mojave Road and Goff, CA