Eye of the beholder

So many times people say “I don’t know what to shoot.” You never know what will catch your eye so you just have to get out there and be open to possibilities.

Galen Rowell said once “I almost never set out to photograph a landscape, nor do I think of my camera as a means of recording a mountain or an animal unless I absolutely need a ‘record shot.’ My first thought is always of light.” 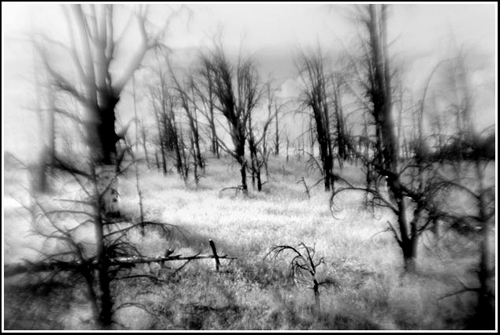 Evidence of the Seqouia National Forest's 2000 Manter Fire can still be seen today. Using a LensBaby in this image increased the sense of mystery and desolation.

Evidence of the Seqouia National Forest’s 2000 Manter Fire can still be seen today. Using a LensBaby in this image increased the sense of mystery and desolation.

A few summers ago, the heat seemed to be more intense than normal and I had a case of heat-induced cabin fever. I wanted to go somewhere other than the market for popsicles and ice cream and I didn’t want to just go for a drive in the heat; I actually wanted to be able to get out of my car and perhaps make an image or two.

I had heard through the botanical grapevine that wonderful flowers were blooming and making a spectacle of themselves up Sherman Pass in the Southern Sierra mountains.

And at 9,200 feet elevation it was much cooler up there.

It also took much longer to get there than I anticipated (four hours), but what I found was well worth it.

I expected to photograph flowers that day because that is what I love to shoot.

What I didn’t expect was to be visually moved by the startling site of miles of blackened trees stark against golden nonnative grasses on Nine Mile Canyon road east of Kennedy Meadows. Here and there a little green bush showed hope of recovery from the Manter Fire.

The sight is chilling and sad, but beautiful in its own desolate way.

So, in addition to my wildflowers I have images of the fire’s aftermath. When I was visualizing how to shoot the scene, I was once again inspired to use my LensBaby. There was just “something” that said this is the lens to use. I think it works. (More on the Lensbaby next month)

My advice to those that say there is nothing to shoot is to go for a drive, watch the light, drive slowly and you might see something that others don’t see as they whiz by in their gargantuan RVs — tiny native orchids, a small hidden spring or a forest of black trees.

Beauty is in how you see and not just what you see.

To read an interesting first-person account of the Manter Fire from Carol Ann Ralston, who was in the Bald Mountain fire lookout, go to:
www.firelookout.org/stories/baldmtn.htm

“You put your camera around your neck along with putting on your shoes, and there it is, an appendage of the body that shares your life with you. The camera is an instrument that teaches people how to see without a camera.”
— Dorothea Lange