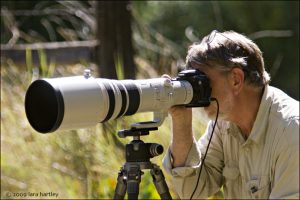 A few years ago, I was fortunate enough to take a workshop with noted bird photographer Bob Steele during the Kern River Preserve’s Hummingbird Festival. The Weldon location is one of the premier birding areas in the country and I wanted to learn how to photograph hummingbirds.

Remember how we talked about long lenses and bird photography in the previous column? This workshop made it pretty clear that the 300mm with 1.4 tele combo is really the bare minimum for effectively shooting birds — and that is for ideal, set-up conditions.

HOW TO SET UP FOR HUMMINGBIRD PHOTOGRAPHY
Because of the feeder set-up at the Preserve, I was able to sit on the ground, brace my elbows on my knees to insure a steady camera, and create some pretty decent images. Lenses longer than 300mm absolutely must be on a tripod, and I probably would have had an easier time of it if I had brought mine out of the car.

I tried some pics with Steele’s 500mm and it was an interesting experience to feel so close to the tiny birds.

The set-up that was used during the workshop can be created at home too, if you want to try some hummingbird pics on your own.

The best hours for bird photography are a half an hour after sunrise and one and a half hours before sunset. Low angle light is crucial to make sure there are no really dark shadows on the undersides of the birds or flowers.

By 11 a.m., with the sun overhead, the shadows were too harsh for good shooting except with a fill flash. Those can be either on-camera flashes or off-camera — adding light to the shadows so they are not so dark.

A couple of hours before the workshop started, Steele put up a red plastic hummingbird feeder filled with freshly-made sugar water. There is NO red food dye needed because it is bad for the critters.

A recipe for sugar-based nectar is available online at https://faq.gardenweb.com/faq/lists/hummingbird/2003034705008887.html

The curious birds were attracted to the brightly colored feeder and soon swarmed around, sticking their long beaks and long tongues into the nozzles to lap up the nectar.

Once the hummers became accustomed to the feeder, Steele introduced some potted red and orange flowers to which he added eye droppers of nectar. Those were a big hit with the jewel-toned hummers!

If you do this at home, angle the flowers so that they face slightly away from you. That way, the birds will approach the flowers while they are facing the camera.

Steele then taped over three of the four feeder holes so the bird would be more inclined to visit the real flowers. Do not leave the tape over the holes for very long because the birds will just get exasperated and fly away.

As the birds hovered, Steele explained that the best way to photograph them is to pre-focus and hold the focus on the flowers, and then move the lens slightly over so that the floating bird is included in a nice composition.

The goal during the workshop was to have the bird’s wings looking still with hardly any motion blur. The wings stop briefly in the “up” position before starting down again, so by shooting continuously, you are likely to capture at least one image with still wings. Fire several shots in burst mode so that hopefully one image will have the wings in the upright position.

Each time I was in focus and the hummingbird was in the right place, I fired off between two to eight shots. Several pics came out with the bird’s wings up and still!

However, I preferred some with a little movement so it didn’t look as if a stuffed hummer was hanging by an invisible thread. The subtle blur added just enough realism. 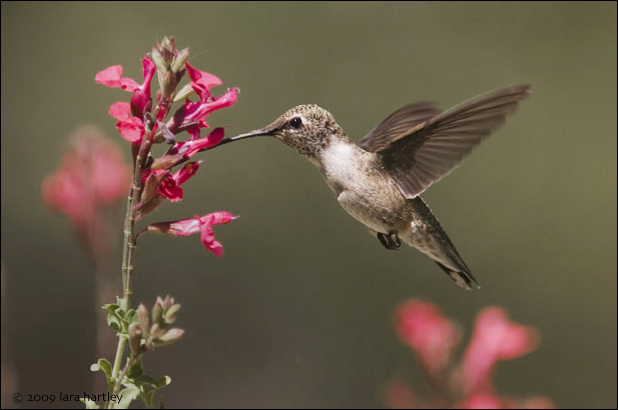 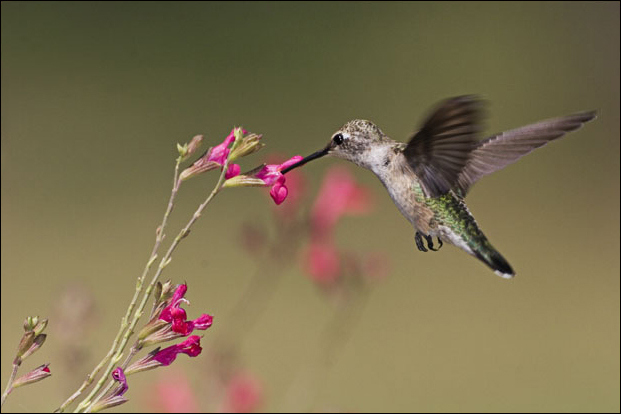 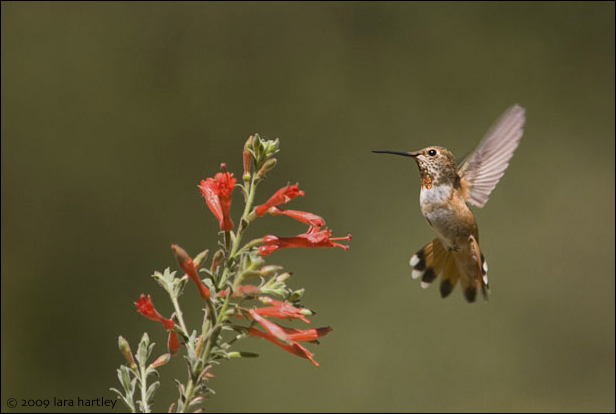 A variety of hummingbird images from the Kern River Preserve’s Hummingbird Festival.