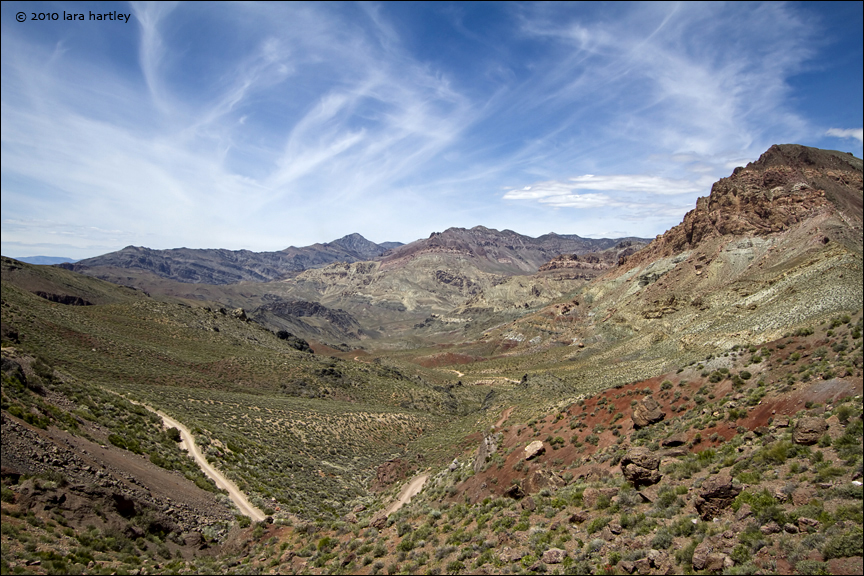 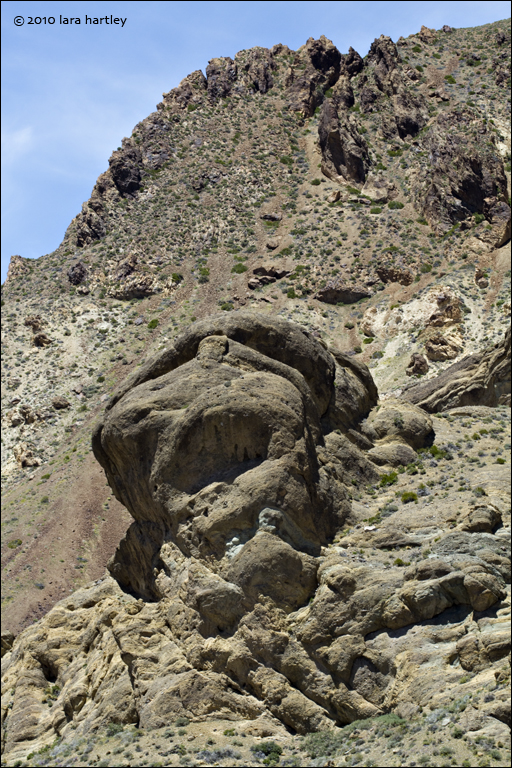 Some rock formations look as if they just stepped out of a horror flick.

Beware the rock goblins that lurk in the mountains around Titus Canyon. The road can be treacherous if you spend too much time gaping at super-sized stone gargoyles and goblins. Trek carefully past the guardians of Red Pass, and the gravel washboard road leading to Titus Canyon’s steep-walled limestone cliffs will take you through some amazing, absolutely breathtaking, scenery.

(above) A 27-mile-long road leads to Titus Canyon and Death Valley past spectacular scenery and stone monsters.

Titus Canyon is the most traveled back road in Death Valley, and on my Saturday visit I saw 10 to 12 cars on the entire 27-mile trek.

On Sunday’s visit I saw three. Not exactly traffic jams.

I was going to see some rare wildflowers, which should not surprise those of you who regularly read my columns. With good intel I was pretty sure what I wanted to see would still be in bloom. What I was not prepared for was the abundance of flowers all down the road. It was a veritable wildflower garden out there with dozens of species. Desert larkspur, little white daisies, big yellow daisies and tall prince’s plume put on a memorable show.

While I was hanging out in the desert taking flower pics I could see headlights coming down the one-way road off in the distance. Each time I stopped I made sure my car was well out of the way. During one stop a small queue of cars approached. I kept a wary eye on the road and kept on shooting. The lead car pulled up, the driver stuck his head out the window and yelled, “Hey Lara!” 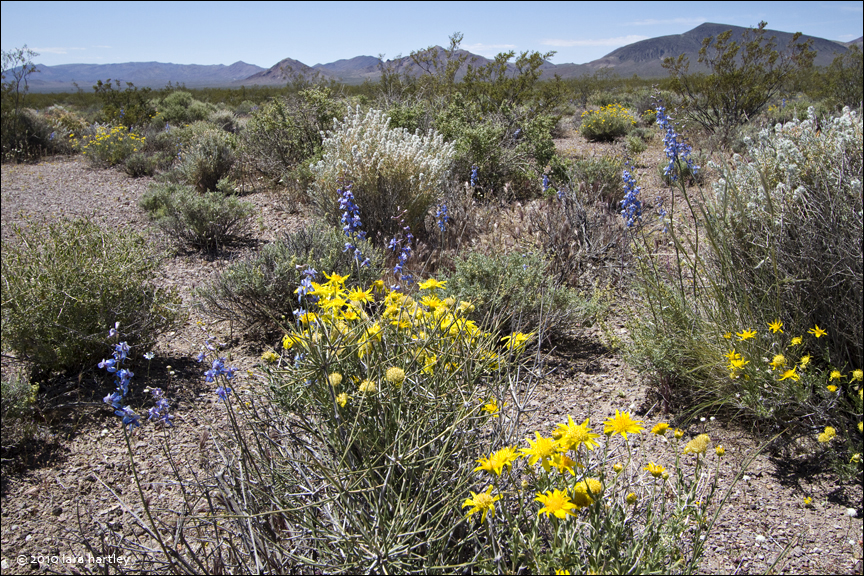 A wildflower garden greeted me at the entrance to Death Valley on Titus Canyon Road in Nevada. 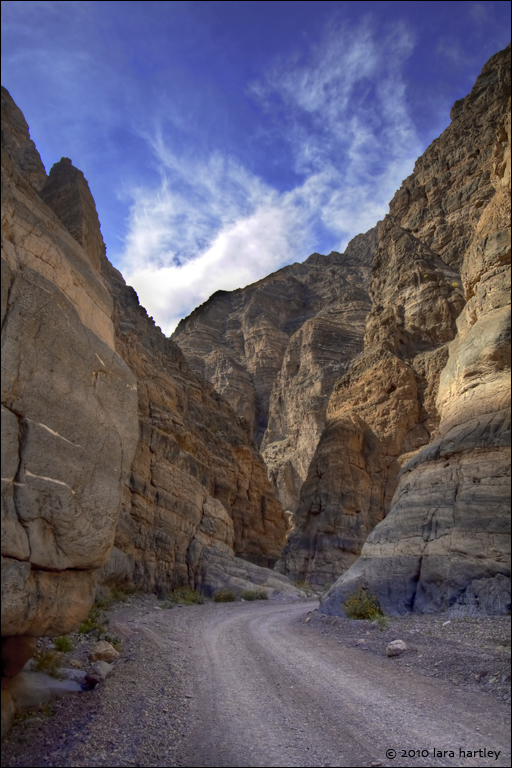 Shifting light paints the sheer limestone cliffs of the canyon with a brilliant colour pallet .

Can you imagine my surprise!? I looked closely at the guy and sure enough, I knew him — Internet handle “B-Spec” — from a Web forum called “Panamint Valley” — a group of like-minded desert lovers who have regular get-togethers in and about Death and Panamint valleys. I asked him how the heck he knew it was me standing out in the desert. He said he saw Walter-the-Car first, recognized her, looked around and saw me. He was leading a short auto tour down Titus Canyon.

Another one of those “it’s a small world” moments. I mean, how weird is that in the middle of nowhere? Walter-the-Car is famous.

I spent too much time hopping in and out of the car, dragging my weighty camera gear and tripod around and was getting pooped, so I decided I’d better head on down the road to my rare flowers’ locations.

I passed by Leadfield and thought there wasn’t enough “stuff” there to warrant a stop that afternoon. I would hit Leadfield another day.

I found both species of the rare plants I was seeking (Maurandya petrophila, rock lady and Arctomecon merriamii, desert bear poppy) and the exotic-looking stream orchid (Epipactis gigantea). 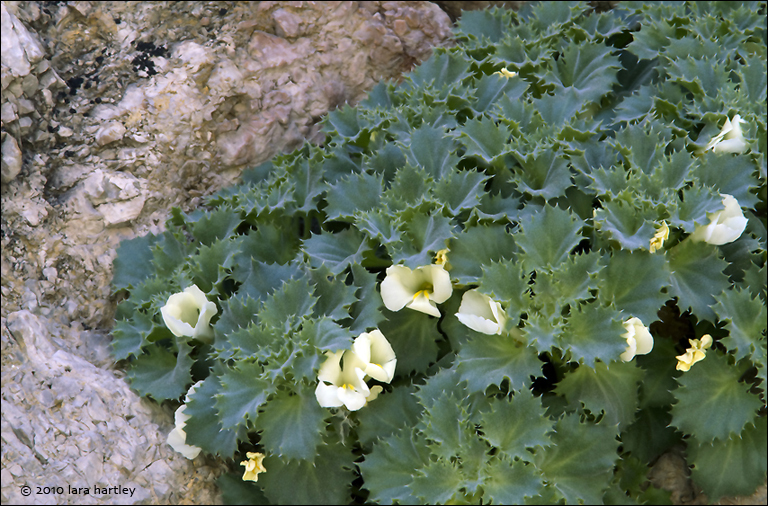 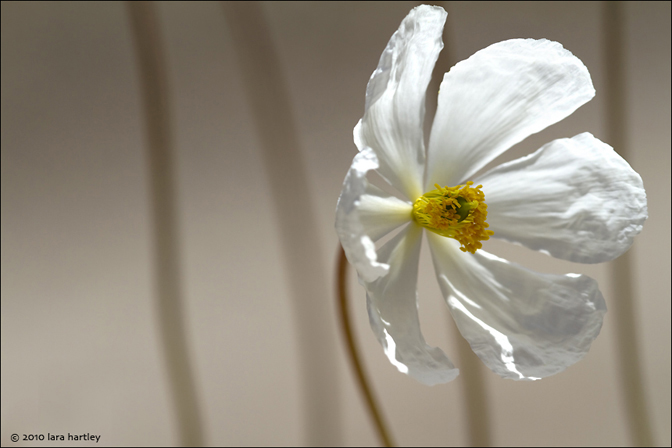 The long stems of the bear poppy make it hard to photograph on a breezy day.

Although the stream orchid is not a rare flower, it is an unusual find in Death Valley.

Orchids in Death Valley, who would have thought it. Klare Spring provides the perfect environment for the orchid.

I envision all sorts of critters enjoy that little oasis with abundant cattails and grasses, and indeed it is a critical water source for the desert bighorn sheep. The water even meanders across the gravel road and sinks into the grey sand.

At the end of the canyon, I hopped on the highway back to Beatty but first stopped at the spectacular ghost town of Rhyolite and the Goldwell Open Air Museum. 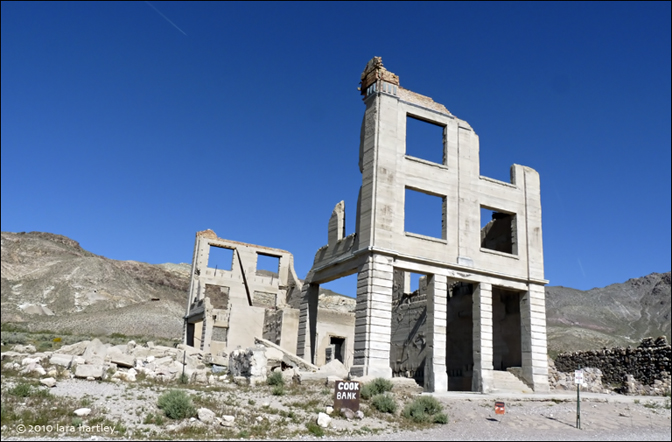 One of the more picturesque Rhyolite buildings, the Cook Bank, is slowly crumbling into dust and memories. 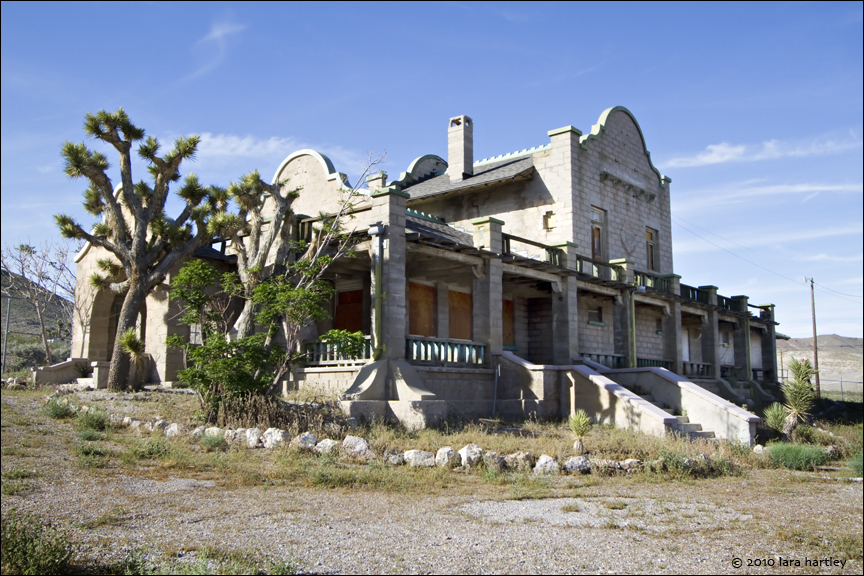 Plans to restore the Las Vegas and Tonapah Rhyolite Depot have been derailed by a lack of funding so it sits in faded glory. Hopefully the building can be rescued before it is too late.

Just outside of Rhyolite a group of prominent Belgian artists, led by the late Albert Szukalski, created a self-described art situation consisting of seven outdoor sculptures that are colossal not only in their scale, but in their placement within the immense upper Mojave desert. 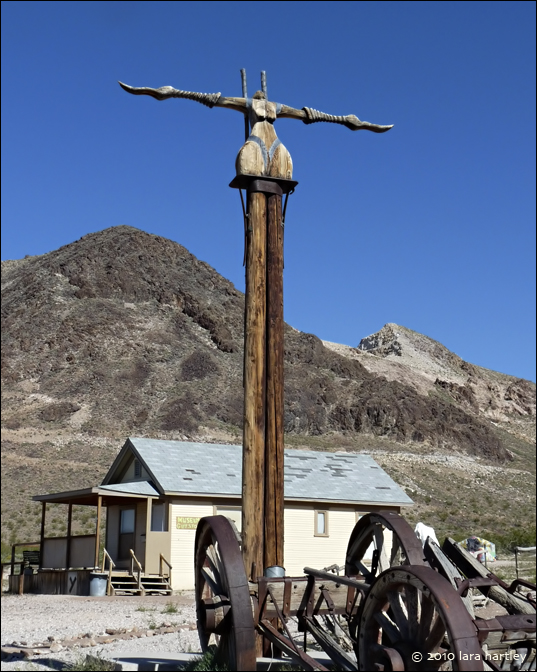 Icara, by Dre Peeters, is an exquisitely carved woman reaching for the sun near the Goldwell Information Center. The sculpture represents the female incarnation of Icarus who perished after flying too close to the sun.

I wanted to see the life-size sculptures by Szukalski depicting Da Vinci’s Last Supper. As the sun was going down behind the mountains, the art took on a ghostly glow. I thought no matter what one’s spiritual outlook on life, these statues were oddly at home and at peace in the vast desert sunset, as was I.

Albert Szukalski's 1984 work, The Last Supper, glows in the dying light of day. It was designed to last only two years, but it has endured to become the signature piece of the Goldwell Open Air Museum. Szukalski was born in 1945 in Poland and died in Belgium in 2000.

Click here to watch a video of a drive through Titus Canyon.

Piercing the Heart of the Panamints Via Goler Canyon

Goldwell Open Air Museum
The sculpture park is free and open to the public 24/7. Click here to watch a video about the Goldwell Art Museum.

For Albert Szukalski, “America” and “The West” represented a place of ultimate freedom where he had permission to pursue his artistic vision unfettered by historical precedent or convention.

With new artist residency and artist workspace programs offered in the nearby Red Barn Art Center, Goldwell remains the kind of place for those who seek adventure in their art making in a marvelous and challenging landscape.