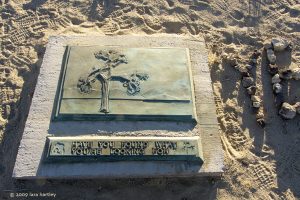 This beautiful memorial stands as a testament to the power of song.

I wonder how they found the perfect Joshua tree — the rock band U2. Did they just drive around near Lee Flats outside Death Valley until they picked just the right plant? Or did they have advance scouts?

Joshua Tree was U2’s first No. 1 album and the 1987 Grammy Award-winner for “Album of the Year” and there was much acclaim for the stark black and white images created for the album by Anton Corbijn.

The band posed in front of the quintessential Joshua, in artsy poses and serious faces out in the middle of nowhere.

The tree was not really close to the highway, one had to want to trek into the desert on purpose to find it. Which leads me back to how the heck did they find that “tree?”

Nobody seems to know.

The multi-limb plant, which is not really a tree but is member of the lily family, collapsed from natural causes some time around October 2000. 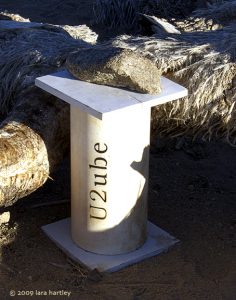 Inside the U2ube are log books, photos of the standing Joshua Tree and other memorabilia. I love how creative people are.

A friend had pointed out the general location earlier that year, but I figured I would go see it another day. Well, another day did not happen until Thanksgiving 2009. By then the tree was long gone.

However, fans have created a memorial of sorts to the band and the tree out where the streets have no name and where there is no cell phone service in God’s country.

I decided the warm November afternoon was the perfect time to try to find the famed Joshua, even if it was dead

As in most adventures, it was not an easy find. I had forgotten to write down the GPS coordinates or upload them into my GPS unit. I did have photos I had downloaded from the Web, showing the landscape and horizon from the tree’s location. Sure ‘nuff I recognized the line of mountains. But other than that I had no clue where the memorial was. I meandered down this one dirt road and up another with no luck. 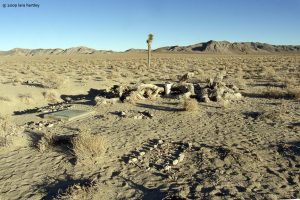 Of course I had to place my own initials near the downed plant. I wonder how long they will last.

I was on my way to Panamint Springs Resort, (55 miles due west of Death Valley) for the annual free Thanksgiving dinner. I figured I would go online there for the coordinates. It is rather amazing the resort has wireless Internet considering its desolate location. You can sit on the porch and connect to the rest of the world while sipping a diet Pepsi or a cold brew, admiring one of the best views in the world.

But PSR’s Internet service was temporarily kaput. One of my fellow desert rats, historian Bill Gossett, assured me the famous Joshua’s location was an easy find and proceeded to draw me a map — on a napkin. It looked like a pirate’s map from days of yore.

Oh dear, do I really want to go off-roading by myself in an area I am not familiar with? 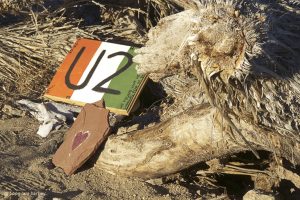 One couple found what they were looking for in each other.

“If you have not heard from me by tomorrow afternoon, send out the posse,” I told my friends. It’s always a good idea to let folks know where you are going, doncha know?

Sometimes all dirt roads look alike, especially with only a hand drawn map, so I didn’t hold out much hope of actually finding the dead tree.

I had just about given up when I remembered what Gossett had told me, “You can see the footprints where other people have walked out to the Joshua’s remains.”

As I was headed back to the highway, I saw the tracks and in the distance a prominent dead Joshua tree limb. 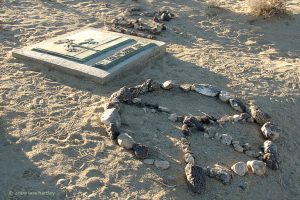 U2’s message of peace and co-existence in the world is powerful as is their message of “question authority.”

The funny thing is, I had driven right by this particular place earlier in the day, but just did not connect the tracks I saw with the location I was supposed to find.

I felt pretty elated at the find and walked the hundred yards or so to the memorial. I don’t know why it mattered that I find this lonely spot, but it just did.

I signed the logbook and walked away, humming “I still haven’t found what I am looking for.”