Giant Rock and the Integratron in Landers, CA 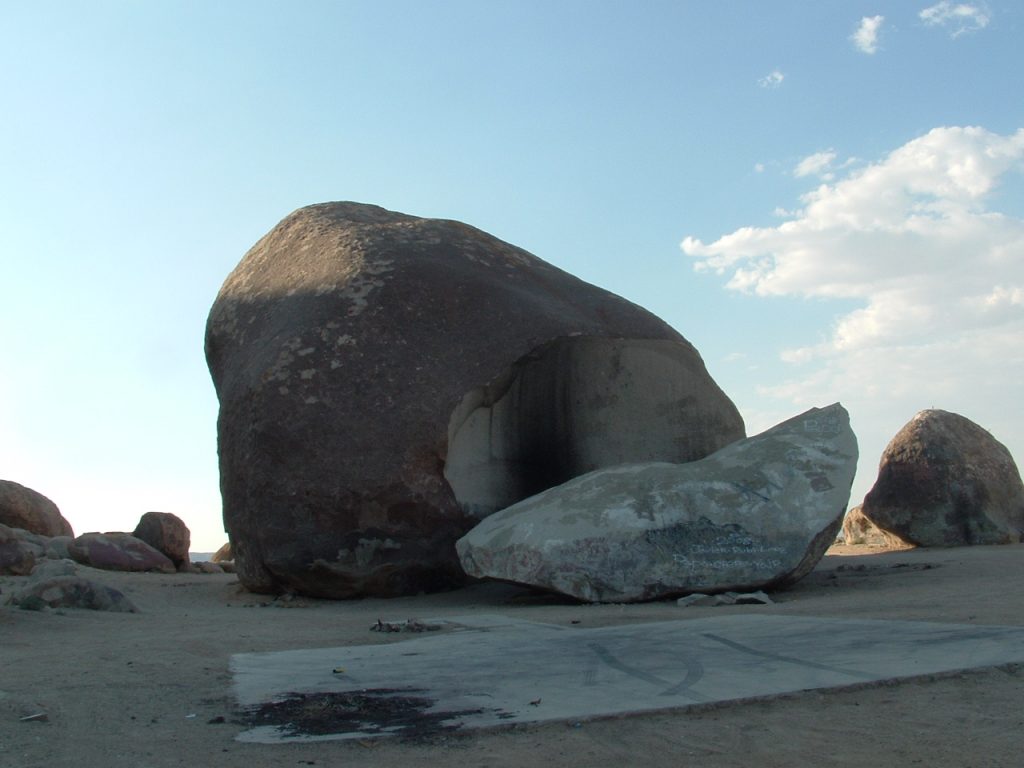 “The Giant Rock nearby Landers, CA. The fragment in the foreground broke off from the main boulder on February 23, 2000, due to unknown causes. The concrete pad is a former restaurant building that was part of the Giant Rock Airport that was leased from the U.S. Government by George Van Tassel and his family during the late 1950’s through the 1970’s. The Giant Rock stands about 7 stories tall and is the largest freestanding boulder in North America.” Wikipedia.org.

The Giant Rock in Landers, CA received its distinction mainly due to George Van Tassel and the UFO Conventions he held there.  Van Tassel was first introduced to Landers and its huge boulder by Frank Critzer, a German immigrant who had come to the desert to try his hand at prospecting in the early 1930’s. Critzer lived in a subterranean space he dug out underneath Giant Rock.  It was approximately 400 sq. feet.  The underground homestead kept Critzer cool in the summers and warm in the winter months.

Van Tassel was employed as a mechanic in his uncle’s Los Angeles auto shop when Critzer came in looking for someone to repair his car for free. Van Tassel and his uncle were interested in his stories and fixed the vehicle. A year later they received an invitation to come out to see Critzer’s claim and visit his homestead under the rock.  Van Tassel visited Critzer and his rock, and subsequently spent many weekends visiting the man, who he felt was brilliant.

“Frank had written a manuscript called the “Glass Age” which he’d given to a friend to type. In 1936 he had already in print all of the plastics we use today, and some of which we do not have yet. He was an advanced thinker in his own right, with a brilliant mind.”

An antenna Critzer built on top of Giant Rock, and his German last name were the likely origins of rumors circulating in the region that he was a spy during World War II.  Deputies arrived to take him in for questioning, and he died in obscure circumstances in an explosion on that day at his Giant Rock dwelling in 1942. His home was burned and boarded up after the raid and all of his possessions removed.

Van Tassel had become a flight test engineer during the 1930’s and worked for Lockheed International and Douglas Aircraft.  He flew with Howard Hughes during World War II.  After Critzer’s death, Van Tassel came out again to Giant Rock with his family on vacations because he loved it there.

In 1945 Van Tassel applied to buy the land from the BLM and build a small aiport there.  Critzer had cleared a large area nearby that planes sometimes used an informal landing strip.   In 1947, Van Tassel finally moved to Giant Rock with his wife and three daughters. They built a small cafe next to Giant Rock. The airport was reopened and pilots would fly in for a piece of homemade pie at their cafe. 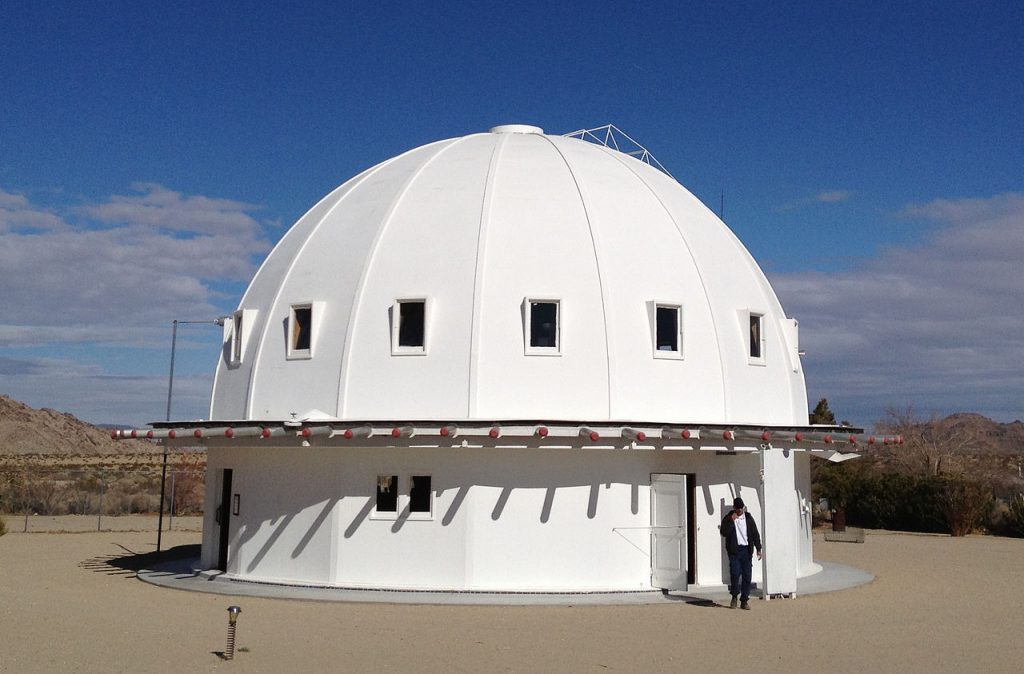 The Van Tassel family lived there for twenty years, and hosted many UFO Conventions at Giant Rock.  By 1959 more than 11,000 people were attending the UFO conventions.  Van Tassel asked his supporters for donations to help build his life’s project, the Integratron, intended to serve as a time machine and rejuvenation center.

Van Tassel wrote numerous books about UFOs and his encounters with them.  He claimed he had contact with UFOs through meditations and channeling that took place under Giant Rock.  Van Tassel maintained that his communications with UFOs and discussions with scientists such as Nikola Tesla led him to the unique design of the Integratron.

Van Tassel died before the Integratron was completed. After his death in 1978, the Integratron had several owners and was kept as a private property.  In the early 2000’s,  three sisters purchased it and opened it to the public for tours and sound baths.

From the I-10 take CA-62 E/29 Palms Hwy. to Reche Rd in San Bernardino County.  Continue on Reche Rd. Take Belfield Blvd to Giant Rock Rd/Landers Ln which is a graded dirt road.

Take I-10 to Hwy 62 exit towards Yucca Valley and Joshua Tree. In Yucca Valley go left at Old Woman Springs Road/HWY 247.  Drive for 10.2 miles to Reche Rd.  Turn right on Reche Rd. and drive for 2.2 miles to Belfield Blvd.  Turn left on Belfield and drive to the Inegratron gate on the right just before the road ends.