Boredom can be a wonderful thing. It can get you out of the house; it can give you reasons to meet people you might not talk to otherwise. Boredom can lead to adventures of all shapes and sizes.

My mother always told me, “Intelligent people don’t get bored, they find something to do.” I am not sure if she wanted me to wash dishes or go find something new and interesting to do or see — or maybe she was telling me I was not intelligent. I hope it wasn’t the latter.

Anyway, Sunday, I was bored. It was time to do something, to go some place. Death Valley and the possibility of wildflowers beckoned.

Going past Dumont Dunes out of Baker I was disappointed to see there were no desert sand verbena near the bridge crossing the Amargosa River on Highway 127. I thought for sure there would be some blooming. There wasn’t even much greenery to suggest flowers were on their way.

The barren banks of the Amargosa River show no sign of wildflowers.

This did not bode well for wildflowers in Death Valley.

I stopped in Shoshone to top off the gas tank — holy cow, gas was almost $4 a gallon! Folks said there were almost no flowers in Death Valley proper due to the lack of fall rains. 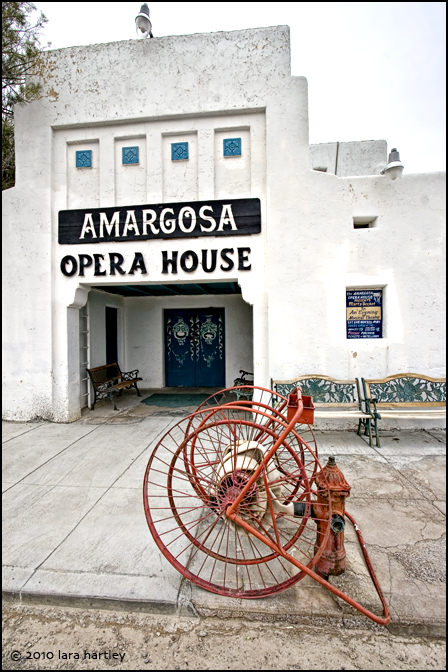 An antique fire hose sits outside of the Amargosa Opera House.

Well darn. There went that adventure.

Instead of heading over Jubilee Pass down to the valley and Badwater, I decided to head over to Death Valley Junction and the Amargosa Opera House and Hotel. I wanted to see how the opera house where ballerina Marta Becket once danced was doing.

Since I was there last, the once sad and neglected cafe had been rejuvenated.

Now the old place was sparkling clean and a’jumpin’ with visitors. Home-cooked meals and pies gave off an inviting aroma and I indulged in a slice of cherry pie. 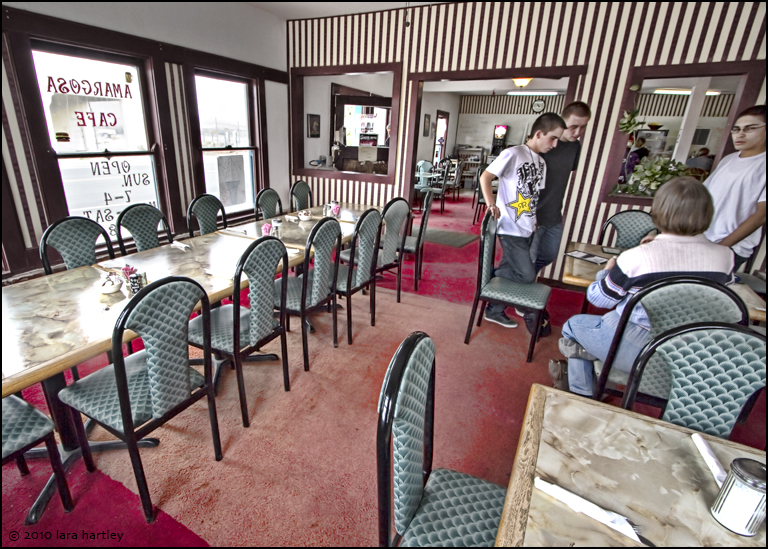 Home-style food is is popular with locals and visitors alike.

Going on the road and talking with people means overcoming my natural shyness and the inclination to stay behind the camera. But what is the fun in that?

Meeting new people and hearing their stories is when the adventure starts. This trip was no different.

A gentleman sat down next to me at the cafe’s counter and we started talking. He said he came to the cafe often, so I asked him what was his favorite thing to eat and oh, by the way “what’s your name, so I can quote you, and where are you from?” 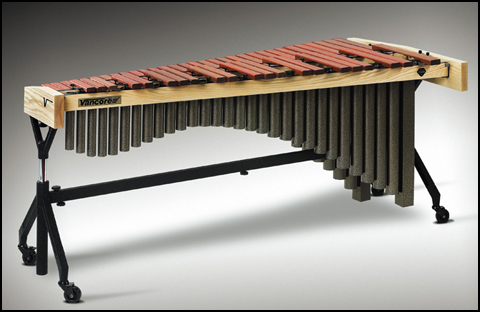 The marimba is a musical instrument in the percussion family. Keys or bars (usually made of wood) are struck with mallets to produce musical tones. The keys are arranged as those of a piano, with the accidentals raised vertically and overlapping the natural keys to aid the performer both visually and physically.

Marimbas originated in Africa hundreds of years ago and were imported to Central America in the sixteenth century. The original African sounds were incorporated into and changed by the music of the local American cultures.

He handed me a card that said University of Nevada, Las Vegas, Dr. Timothy Jones, lecturer, percussion studies. His accent said he was from Australia.

OMG! A drummer! In all my travels I have never met another drummer and a Ph.D. no less. (Bet you folks didn’t know I am an ex-drummer, did you?)

We immediately got down to the brass tacks of discussing drumming and music — go figure.

Dr. Jones frequently brings his Ragtime Rebel Marimba Band to perform at the Opera House before the main show and sometimes in the cafe afterward. The marimba band is one of the premier percussion ensembles at UNLV and is a small group that specializes in playing ragtime music. “We do musical transcriptions of everything from opera to Johnny Cash,” Jones said. 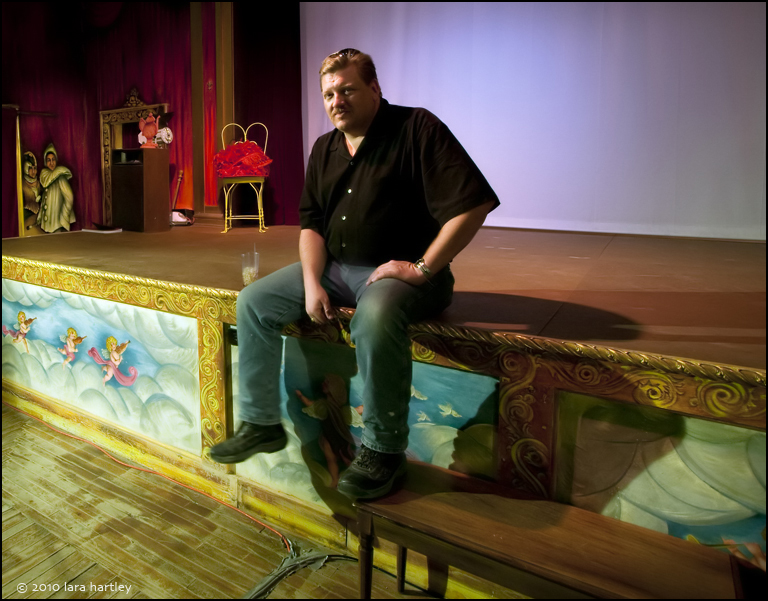 Surrounded by whimsical creatures, Rich Regnell is responsible for the town of Death Valley Junction, population 3.

After discussing the finer points of stickman Steve “Machine Gun” Smith’s drumming technique, Dr. Jones recommended his performance of “Mr. Hi-Hat” — you folks have to see this — www.youtube.com/watch?v=-pucu0bYyLI .

The history of the opera house and Marta Becket has been well documented online, www.amargosa-opera-house.com— in her autobiography “To Dance on Sands” and in the 2000 indie film Amargosa.

Kings and queens and other royal folks attend the performances at the opera house, peering down from their high vantage points. 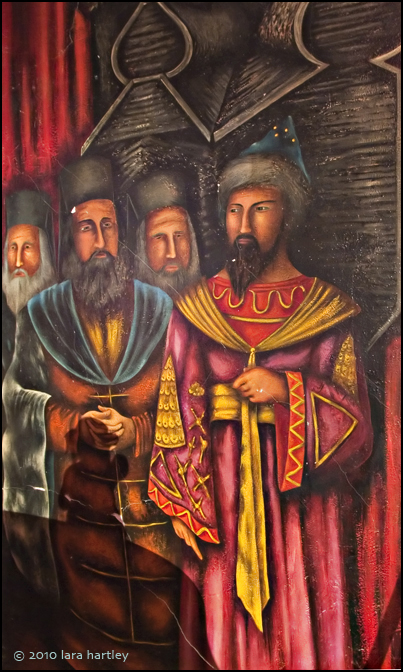 Her mission was always about preserving the classical past, said writer Robin Flinchum in a 2006 interview with Ms. Becket.

Becket covered all four walls and the ceiling of the opera house with richly colored classical trompe-l’oeil murals. They are a national treasure and their preservation is the responsibility of the Amargosa Opera House Foundation.

Cupids and jesters frolic on the walls and ceilings of several of the hotel rooms also.

“Trompe-l’oeil” means to “deceive the eye” and is an art technique involving extremely realistic imagery in order to create the optical illusion that the depicted objects appear in three dimensions, instead of actually being a two-dimensional painting.

Indeed, one painting can fool you into thinking there really is a lace shawl hanging on the wall in the hotel lobby.

I wanted to stay the night but on this trip there was no room at the inn for a spontaneous sleep-over. 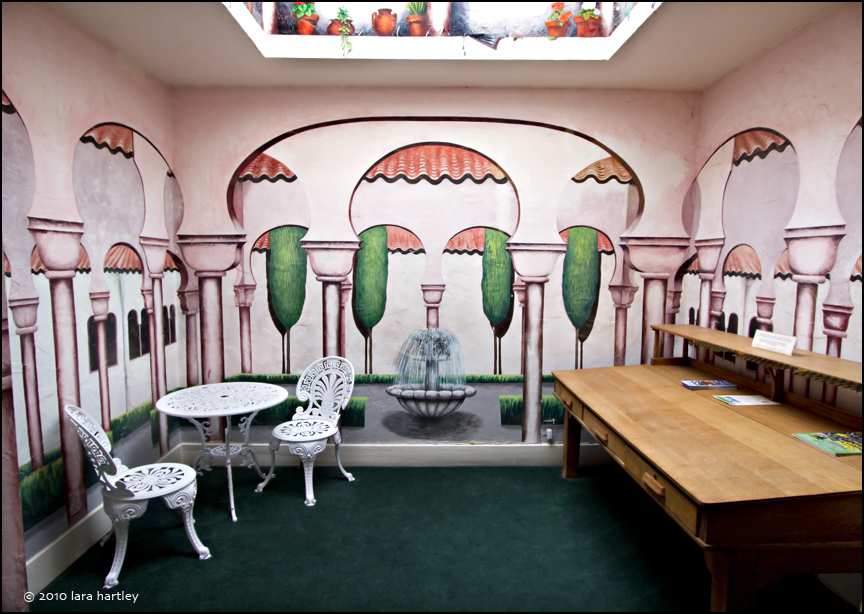 I love staying in the hotel and could look at the paintings for hours. One of my favorite scenes is the one that looks like a small Spanish garden, tucked away in an alcove.

After photographing inside the opera house and enjoying the company of Regnell, I headed back to Barstow — the long way around — the very long way around — via Furnace Creek, Towne Pass, Trona and Highway 395. Again I saw very few flowers other than brown-eyed primroses along the roadside here and there and a small patch of desert gold on Highway 190 near Furnace Creek. Where there were flowers there were photographers trying to make the most of the situation.

The whole day/loop took nine and a half hours — and I wasn’t bored a minute.

For more information about the Amargosa Opera House and Hotel as well as show information, go to: www.amargosa-opera-house.com/index.htm 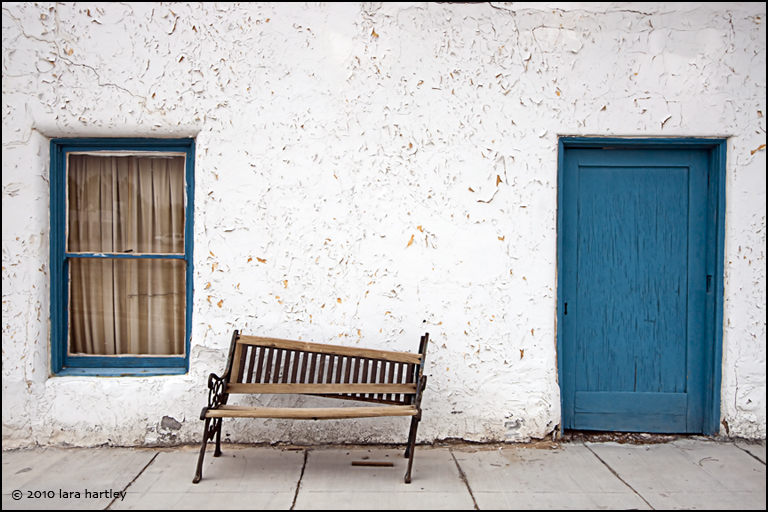