Mountain lion sightings are always memorable. It’s a marvel of nature to see one in the wild, but it can also be a hazard, especially if the sighting takes place close to home! When that happens, our natural urge to ‘sound the alarm’ is uncontrollable, because nothing raises the hairs on the backs of our necks more than the idea of being stalked, attacked, killed and eaten by a large predator! It’s a primal fear, the reality of which we seldom confront in this modern day and age. Although attacks on humans are relatively rare, in some regions the frequency seems to be increasing.

For those of us who live on the edge of wild country, it’s a good idea to learn how to cope with meeting a mountain lion. In most cases the encounter is only a brief glimpse as it slinks away, it could be curious about us and pause to watch, but usually they just leave. Don’t approach them, in fact, it’s probably smart to just leave the area too.

Lions prey mainly on deer, but javelina, elk, and bighorn sheep are also taken. Small animals, livestock, and even pets are sometimes eaten too. The big cats are incredibly stealthy hunters that stay low and move slow until within rushing range of the chosen victim, then they launch a lighting fast attack! Targeting the back of the neck, their huge canine teeth are designed to punch through vertebrae and sever the spinal cord. Alternatively, they will latch onto the throat, thereby suffocating their prey.

The chances are good that you’ll never see it coming. Lions make their living by sneaking up on unapproachable animals, so if one decides to stalk a person, it will very likely be successful in launching a surprise attack. That’s one reason why it’s advisable to be in the company of others when spending time outdoors; there is safety in numbers. Don’t walk alone, especially at night when predators are apt to roam. I always carry a spray canister of bear repellent, it’s a good multi-purpose deterrent.

If you do see a mountain lion stalking you, don’t run! Stand up, and make yourself appear as large as you can. Raise your arms over your head and wave them, if you have a walking stick, shake it violently! Keep your eyes on the animal, shout at it, and express yourself as a very dangerous adversary. If attacked, you must fight back and always remain on your feet! Punch, kick, aim for it’s eyes with your fingers…Never give up! Having a sidearm can certainly help in those dire straights, but it may be that a sharp and sturdy sheath knife is easier to employ in a clinch. All this talk of fending of an animal attack is a surreal mental image to us civilized modern man, isn’t it?

Mountain lions are usually solitary hunters, but a female can give birth to as many as six kittens, which may stay with her for as long as two years. Male lions only associate with females during estrus, which may occur at any time of year, and kittens are born in mid-summer. According to Harley G. Shaw, author of the Mountain Lion Field Guide, “Females with kittens have been found associating with other mature females with kittens, or with other single mature females.” So under certain conditions, theoretically, it’s possible to encounter multiple individuals.

I have only seen one mountain lion ‘at stone throwing distance’. Undoubtably, many have seen me. Man is normally not on the menu though, so I don’t worry much. But it’s interesting to note that a large percentage of attacks on humans are done by young adult lions who are either not very successful at hunting deer, or, there are no deer to hunt. Too many humans hunting deer may affect the way lions make their living.

Humans hunting lions is much more the norm than visa versa, and I believe that legal lion hunting is beneficial for instilling the fear of man, thereby creating a buffer of distance between us and them. But doing anything to excess can be harmful. The balance of nature requires predators such as mountain lions, they are important to the ecosystem, so lets remember that they deserve our respect but not our persecution. Leave them to their habitat, and us to ours; allowing that when they make trespass, sound the alarm! 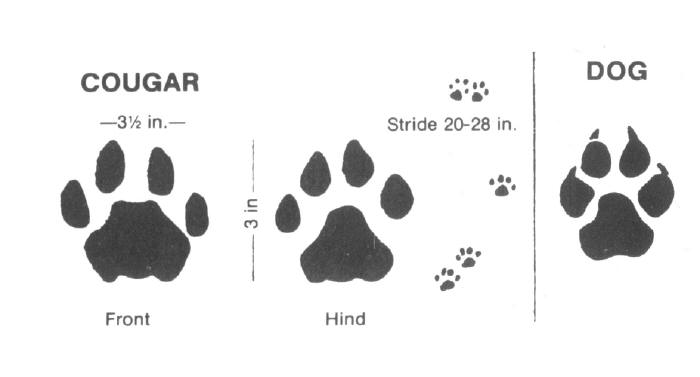