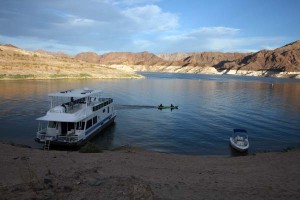 Houseboat and motor boat on sandy beach at Lake Mead.

Exploring the desert has been a long-time fascination and passion of my Dad’s.  He would take the family on trips to remote parts of the desert in search of gold, lost treasure or to just explore the harsh, yet beautiful desert landscapes.  He has boated on Lake Mojave near Laughlin, NV and he took an auto tour around Lake Powell several years ago.  The one desert lake that he had not yet explored was Lake Mead near Las Vegas, NV.  One of his bucket list vacations has been to rent a houseboat for a long weekend on one of the big lakes along the Colorado River, so he decided to invite the family to join him for a weekend on Lake Mead. 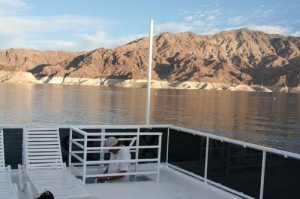 View from the top deck.

We booked the trip in October as the rates were a little less expensive.  We were scheduled to depart from Callville Bay, located in Lake Mead National Recreation Area, just outside of Las Vegas, NV.   We boarded our luxurious houseboat that was equipped with all the comforts of home . . . a couch, dining room table, four bedrooms, full kitchen, 1.5 bathrooms, front deck, back deck and top deck.   DirectTV was hooked up to two HD television sets. We had two sound systems, one on each level which made the boat feel like home.  It was the perfect set-up for our group of six adults.  This was definitely NOT roughing it!

The boat rental staff came by in the morning for our 1-hour boat training session and shortly there after we were on the bay cruising towards the open blue waters of Lake Mead.  We were all quiet as we took in the sparkling scenery around us.  The contrast of the blue water against the buff-colored mountains and cliffs was stunning. The weather was in the low 80’s and it was a perfect day for boating.

We slowly made our way into a cove where we were able to view the Hoover Dam up close.  What a massive project to build such a dam.  This was evident in its sheer size.  There were kayaks, motor boats, fishing boats and our houseboat at the base of the dam.  All eyes were turned upward towards the dam.  Helicopters circled above.  I figured they were tour choppers as they flew in and out of the area all day long. 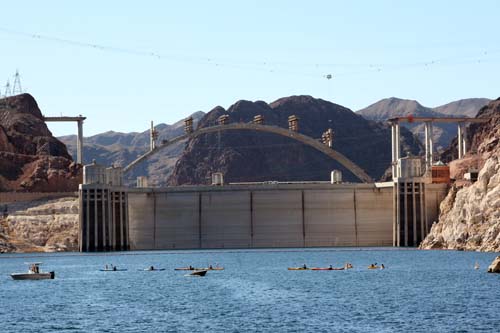 After we left the dam area, my friend and I boarded the small motorboat we were towing and went to scout for a location to dock the houseboat for the afternoon and evening. We found a location on a cove called Sandy Beach. It seemed like a good location that was protected from the elements. We tied up the motorboat and directed the houseboat onto the beach.  It took four adults and about 20 minutes to pull in the boat, to drive in the stakes and tie down the ropes. Tugging ropes and driving stakes takes some muscle! All was secure so now we could all relax! 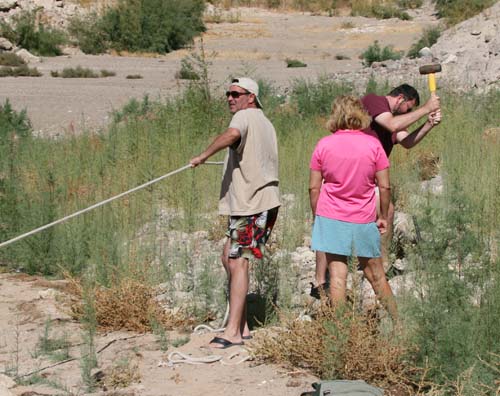 Our own crew putting in the stakes to secure the boat.

The weather was still warm and we spent the afternoon swimming and fishing.  The houseboat had a slide on the backside, which was a fun way to cool off.  In the afternoon, we relaxed on the top deck and watched the sun drop behind the distant mountains. My brother climbed up the hill above the boat to get some picturesque photos of the lake below including a few photos of a coyote that was passing by.  What a view!

We barbecued steaks on the front deck and hung out on the beach for a while.  It was such a peaceful setting.  After a few games of Black Jack we settled in for the night.   Sleep soon set in and we were dreaming of all the fish we were going to catch the next day.

At about 3:30 AM something woke us up.  I heard a rapping noise that made me look out the window to discover our houseboat had become untied due to the wind and had drifted against the beach.  NOT a good situation.  Both ropes had been pulled out with the heavy stakes and they were being dragged towards the waters edge. The rental staff warned us about this type of situation.  The motors could get damaged, we could get sand in the intake valves for the cooling system, etc.

It took four of us to pull the boat back around to its proper position.  The boat did not sustain any damage. The wind stopped for a while, which helped a lot.   We drove in the stakes again and retied the boat.  It was about 4:30 am before we were able to get back to sleep.

In the morning the wind kicked up and the stakes started pulling out of the sand again.  We decided it was time to leave that beach, so we untied the boat and pushed it off shore.  Our next destination was the Narrows,  a passage with high cliffs and many coves.  It links the Boulder Basin to the Virgin Basin, both part of Lake Mead.  We were told the Virgin Basin was very windy, so we turned around at the end of the Narrows to search for a cove to park for the night.   Most coves were not suitable for the houseboat  . . . too narrow, too many rocks or not enough shelter from the wind. We decided to head back towards the Sandy Beach.  We chose a new location to the east that was more protected from the wind.  When we cruised up to a site we thought would be suitable we saw some big horn sheep right above the water. It was a sign . . . this would be our beach for the night.  We tied the houseboat down and decided to explore the area on foot. 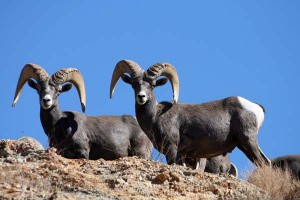 The two Big horn sheep looked down as they retreated to higher ground.

This cove was perfect.  It had some great areas for fishing, good access to hike and a mountain with a herd of big horn sheep grazing on it. This made for some great photo opportunities.  My brother, once again, hiked up the mountain.  This time he took one of my zoom lenses with him.  He was able to get really close to the big horn sheep, which had retreated to the top of the mountain upon our arrival.  He was gone for over an hour, but he returned with some outstanding photos.

We did some fishing in one of the little coves along the beach.  We caught a Catfish, but it snapped our line as we were pulling it out of the water. I went to grab it, but my friend cautioned me about their barbs that can stab you.  Apparently their stab can be very painful and cause scaring. That stopped me from jumping in after it!  A little later we threw the lines off the back deck of the boat and caught a blue gill, but it was too small to eat, so we released it.  We heard the bass were biting in deeper waters, but we decided to just stay local and fish in the cove. 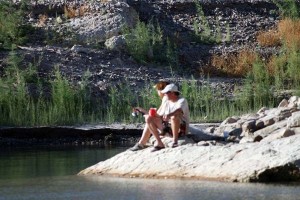 Fishing in one of the small cove areas.

That night we barbecued again on the front deck and spent a relaxing evening under the stars. My brother brought his telescope, which he set up on the beach.  We checked out Jupiter, the half moon and other stars in the galaxy.  It was a great way to finish another excellent day on Lake Mead.  That night we slept well, without interruption.  The wind was calm, the boat didn’t move and we woke up to a beautiful day on the lake.  It was Monday morning and our last day on the boat.  It was time to pack our things in preparation for our departure. 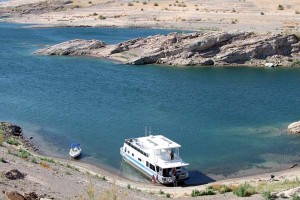 The houseboat from the hill above the beach . . . day two.

We returned to Callville Bay with a new adventure under our belt and tons of photos to add to our vacation logs.  Dad was able to check off another item on his bucket list . . . houseboating on Lake Mead. 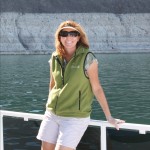 Notes: If you plan to take a houseboating trip there are a few things to keep in mind.  The houseboat requires a few adults on board who are able to drive steel stakes about 3 feet into the ground when tying off the boat. You may want to rent a smaller motor boat to scout beach locations and to explore the smaller coves, etc.  Most people tie down their houseboat and leave it in place for a couple days and use a motor boat for all other water activity. Find a nice, sandy beach where you can fish, play sports, swim and do all of the activities that your group is interested in.  Enjoy!

For more information on Houseboat Rentals and Callville Bay visit their Website.