Oh what a day 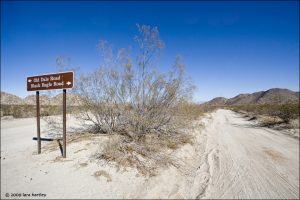 I tagged along with Team DUSA the other day, looking for Barry Storm’s “Jade Mine”. Storm was a sometime writer for Desert Magazine and sometime hunter of lost mines. He was also the author of a book entitled “Thunder God’s Gold”. It was based upon the search for a lost mine in the Superstition mountains of Arizona.

I was the second rig for our adventure -the back-up, just-case-we-get-stuck-and-need-a-tug-out-of-the-sand vehicle. It is always a good idea when exploring the desert any further away than a mile from pavement, to have rescue options.

We couldn’t have asked for better weather. Not so hot as to make hiking uncomfortable and warm enough not to need long sleeves. The destination – deep in Joshua Tree National Park. And wow! what a gorgeous place.

After we got on the dirt track, Black Eagle Mine Road, we did not see another vehicle, coming or going, the whole day. My kinda place. 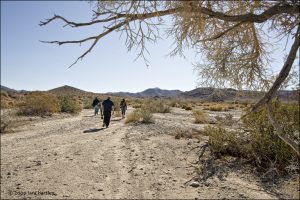 If at the first location, the team leader says, “This doesn’t look right,” well, then you are not in the right spot and there just isn’t reason to keep on walking. And walking. What you are looking for isn’t there.

Up a sandy wash past a dead tarantula and coyote poop we trekked. (Did you know if you open up a piece of coyote dung, you might find little bones and stuff?)

After that lesson in futility, we continued on to a new location. Yes, this looked right according to Cactus Jim. He described what we were looking for and off we went, again on foot.

AT FIRST I THOUGHT HE WAS ALIVE. HE WAS NOT.

I still do not understand why, when there is a perfectly good dirt track, why the National Park Service – in all their “wisdom” – has to close that road. We could have driven right to the location.

I have some very good theories why the guvment wants to keeps us in line and where they can see us, but I’ll save that for another time.

Off we went, oh wait, I said that.

I didn’t make it very far when I pooped out. I was still tired from the earlier excursion. I lay down on a rock and told the rest to go on without me. I was heading back to the cars – only about one third of a mile back.

As I lay there toasting in the sun, I began to think, “What if they find something good not very far away? I’ll miss it!)

So a few minutes later I started after the group. Up ahead I could see a green outcropping I thought might be the location Jim had described about earlier. But as I grew closer I could see the other three WAY past the green outcropping. Much too far for me. So at that point I really did turn back.

I made it to the cars safe and sound. Hmmmm, nothing going on here. Other folks too far away to see at all. Now what to do?

Well, take Walter-the-Car up Black Eagle Mine Road a little farther and see what we can see. Boy, I have to say, thank heavens for a narrow-wheel base and four-wheel drive.

Not wanting to miss the folks on their return I didn’t stay gone very long.

I waited. And then I waited some more. I began to get a little worried. The afternoon was waning, a cool, light breeze had picked up and still no Team DUSA. I ate some more lunch. Kicked at some rocks. Rearranged the back of the car and blew dust off my camera gear.

My mom used to say if I didn’t have something to worry about, I would make something up.

I thought maybe somebody had fallen in a mine, twisted an ankle, broken a leg or had a heart attack. So I ignored the signs that said “no vehicles past this point” and went to look for the rest of my team. (Actually, someone had scratched the word “no” off the sign.)

I drove until I ended up in a wash, the road having disappeared under me and I figured I better head back. I didn’t see anyone. I honked my horn, hollered “you hoooooo,” – no answer. 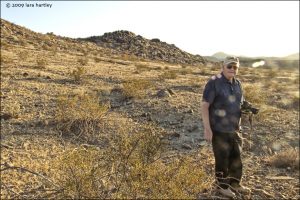 My worry meter really was amping up. I went back up Eagle Mine Road and looked at other avenues they could be approaching. Nobody to be seen.

I suppose I don’t need to tell you, I was worried.

Back again to the “no vehicles past this point” track. They had to be out there somewhere and by this time, somebody could need help getting back to main drag.

Finally I could see people way way way off in the distance. Boy, the air was just so wonderfully clear. I drove until I couldn’t go further and waited. The two “younger” folks didn’t need help walking back so I picked up Cactus Jim and we made the return trip no problem.

You would think after such an adventure everyone would be ready to turn back and head for home.

Oh, not us. We had another place to find.

THE DUSA TEAM AT THE RIGHT SECOND LOCATION!

We thought we found the new spot – team leader said, “This doesn’t look right.” So thank heavens instead of wandering around looking in the wrong place for very long, we backtracked until we found the RIGHT right turn.

GPS units can be great friends. But they can also be very misleading. Dang, those little teeny screens with their little teeny maps are very hard to read. Give me a good topo map to go along with the GPS any time. 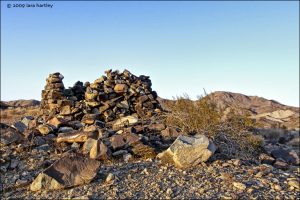 AH YES, THE RIGHT LOCATION AND THE RIGHT STONE CABIN

No misadventures this time. The light was fading fast and it was time to go home.

Oh, I forgot to say: Team DUSA found Barry Storm’s old camp – but much further than they thought it would be.

Dang, I missed it.