Once upon a time

By now, I’m certain that you have collected many images from your digital and film cameras. Now what do you do with them?

You could stuff the snapshots of family dinners and picnics away in old shoe boxes — thinking someday you will work on them, put them in albums, etc.

But generally folks just leave those old negatives and prints in those shoe boxes. With digital, it’s also easy to have your photos stored away out of sight and mind — but now they are on CDs or DVDs. Maybe you will make a print or two to send to family and friends.

How about creating lasting books of the photos that you like best?

There are many ways to approach a book or even a scrapbook project. One is to document a special event, like a family reunion or birthday and make a book from those pics. 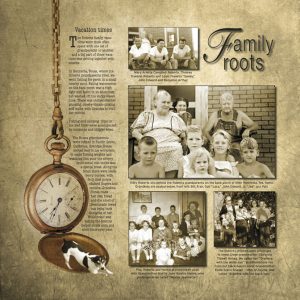 I made a scrapbook page for my brother’s special birthday this year from old snapshots.

Another is to pull images from a specific time period — let’s say the first two years of your baby’s life or your boyfriend’s 40th year. ( I did that one once — in the darkroom!) Or perhaps that once-in-a-life vacation to the Bahamas.

In order to make your book something more than just a collection of snapshots you need to edit and organize the photographs.

First, get rid of anything that is of really rotten quality. Of course, you may want to keep those once-in-a-lifetime shots, such as the blurry image of a whale jumping into your boat because the critter made you jerk your camera. That is OK to keep.

But get rid of the garbage-y out-of-focus blurry stuff.

Now you are down to about 100 photos, right?

If you just throw in a bunch of snapshots that have no relationship to each other, and they are all about the same shape and scope, your viewer will become quickly bored. (Think of your uncle’s slides of his latest vacation at a library resort.)

Movies typically start with a wide shot establishing the scene, moving in with a succession of shots bringing the viewer into the story. This is called the “deductive” approach. 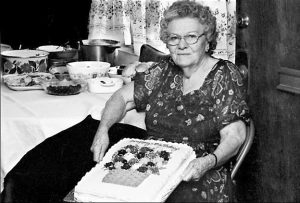 My grandmother posed for a quick shapshot of her birthday cake before it was devoured by the family.

A modified version of this technique can be quite effective when shooting a photo essay or when creating a family book project. You start with an image that lets you know right away what the story is about, and then you proceed from there.

Let’s look at the accompanying images to see how these four photos can be used to start a book.

The event was a family reunion almost 20 years ago on my grandmother’s 80th birthday. 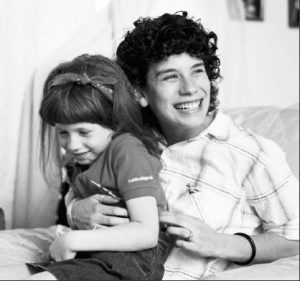 Gramma's Great-Grandkids play around at the big reunion part held in honour of my grandmother’s 80th birthday.

Since the book is about family it makes sense to put as many images as possible of the family and their interactions with each other as possible. When editing photos, pick out the ones that show different folks relating to each other. Also choose nice tight close-ups to show faces. 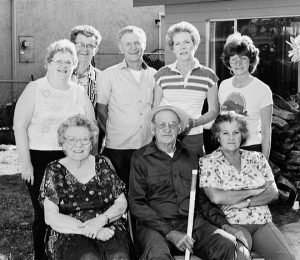 Of course a reunion photo project wouldn't be complete without a lineup of people posing for the camera. There are more creative ways to shoot this shot than what I did, but hey, I was under pressure!

Here’s something to think about if you have an event coming up that you are going to shoot: Think movie-type photography first!

Make sure you have lots of tight shots and don’t just stand back and shoot wide shots all the time. That makes faces too small to see who is who. In the years to come, people will want to see what their family looked like. And someday the people in your photos will be gone.

To add interest change your angle of shooting — bend down or stand on a table.

As you choose photographs for your project, be sure to have a variety of shapes and sizes to add visual interest. Vertical shots always add dimension to a photo story because we don’t normally “see” vertically but rather side to side, horizontally.

Your story has a beginning, middle and end. The first two are easy, but sometimes it is difficult coming up with a good ending shot. Be sure to concentrate on finding just that perfect image to end your project. People will remember the last thing they saw for a long time.

My sister wanted a four-generations photo and thought a close-up of hands would be nicely different. I think it makes an interesting addition to my reunion photo story. Of course I can't put all the images here from the party to celebrate Gramma's birthday, but I think you can get a clear idea from the four shown.

With Christmas behind us, this would be the perfect time to collect images for a future book or video project.

There are a number of sites that can help you produce your book. Of course, you can also make calendars and posters, but I think a book is something that is less likely to get thrown away.

The sheer ease with which we can produce a superficial image often leads to creative disaster.