It started off as a hunt for a wildflower I have long wanted to see: the California Peony. But as I did some reading about the flower’s location I was excited to see exactly what Placerita Canyon Natural Area is all about. 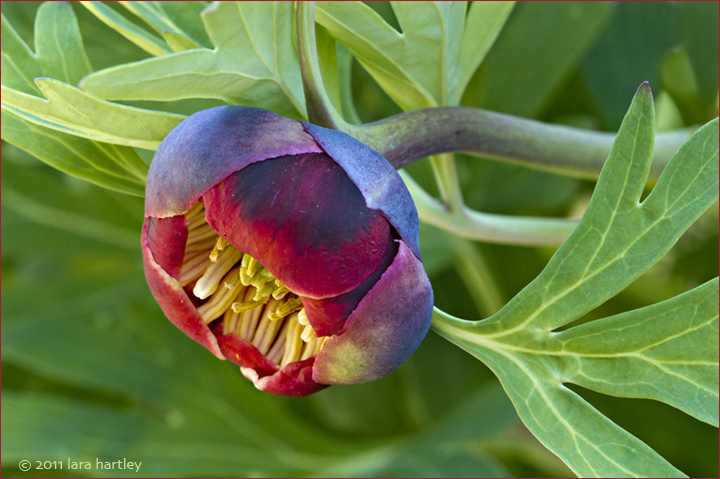 The California Peony is a small flower that hides its face hanging down from its leafy stems.

Well, it is about history and nature, hikes along a seasonal creek which sparkles in the late afternoon sun, picnics, a wonderful nature exhibit and kids.

Lot and lots of kids. It’s a family kind of place. Informative and fun too.

During the week, the Natural Area is full of kids on school field trips, said Ron Kraus, docent trainer and my guide for the afternoon. 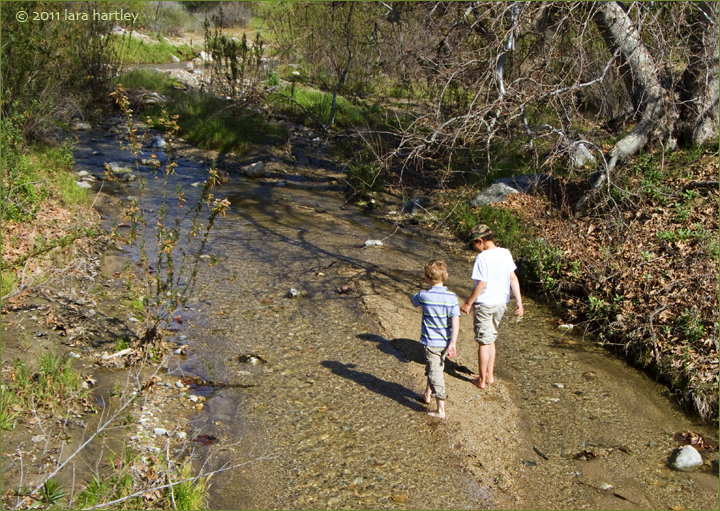 Young boys waiting for a birthday party to begin explore the watery wonders of Placerita Creek. 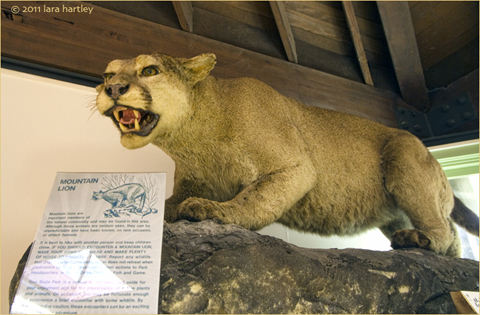 A preserved mountain lion crouches realistically in the nature center.

Over the last five years, Placerita has opened trails and programs to more than:

The AAUW (American Association of University Women) started the docents program in 1960 and it evolved into “Windows in the Wild” program. 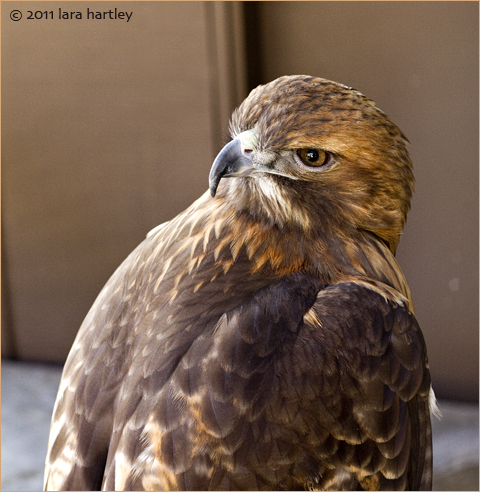 Excuse me, is your head on backwards? Kia turns her head to see me. Birds of prey cannot move their eyes from side to side. Instead, their heads can rotate up to 270 degrees. This head rotation is necessary because the eyes are fixed in the sockets with no muscle attachments — and it looks as if their head is on backwards.

Thirty to sixty elementary school kids are presented with a 2-hour program that starts with a lecture on the food chain and ecological concepts, and then native animals are brought into the room by certified animal handlers — raptors like the red-tail hawk named Kia, Wheely, the Harris hawk and a barn owl who goes by Hopi. There is also a skunk called Ferguson.

According to the Canyon’s web site: “A network of self-guiding nature, history and hiking trails radiates out into the park from the Center, with longer hikes leading to a seasonal waterfall and to the top of the Santa Clarita Divide.” 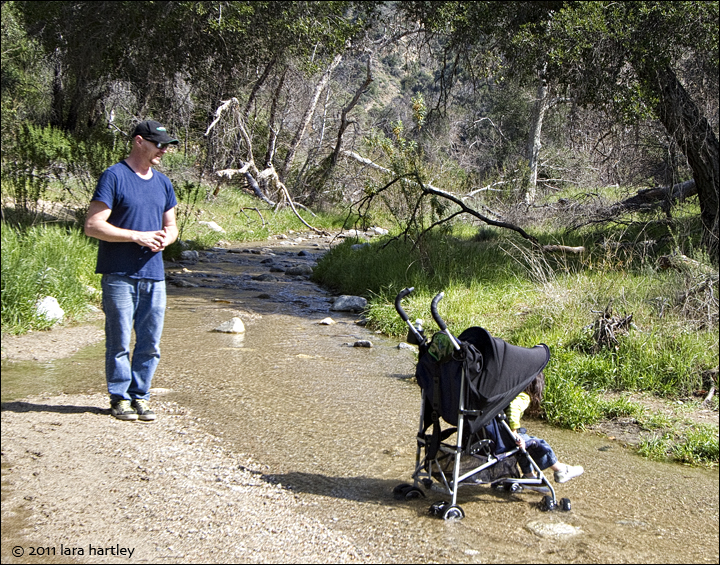 Eric Bliss and daughter Kaitlyn are a little bogged down in the creek. The sandy bottom was not a firm as Eric originally thought when he tried to cross. There is a bridge not far away that allows people to cross without getting their feet wet.

Every second Saturday of the month there is a docent led Bird Walk starting at 9:00 A.M. for beginning to advanced birders. Bring binoculars, a field guide, and water.

Every fourth Saturday of the month there is a “Blooms of the Season” wildflower walk from 9:30 A.M. to 10:30 A.M. Depending on the season, a variety of wildflowers is in evidence. I visited “between seasons” Kraus said, but that was ok, because I was mostly interested in the poppy.

Along the wheelchair and stroller-accessible Heritage Trail, I passed by the Walker Cabin, built by Frank Walker in 1920 for his family. 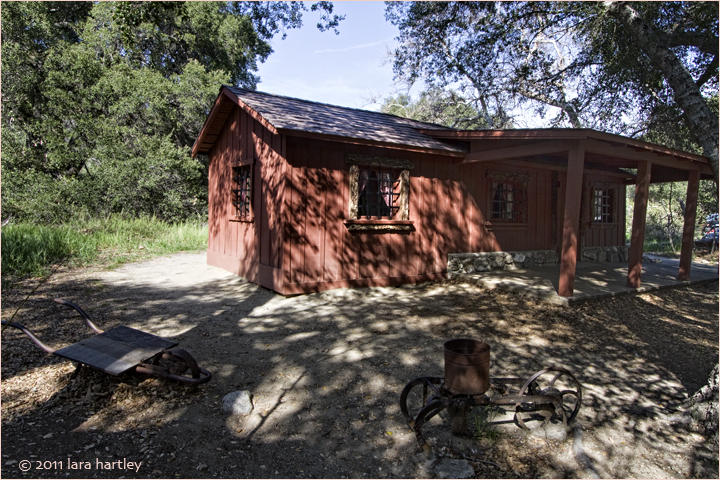 Various farm implements are located near the Walker cabin where Frank Walker and his wife raised 14 children. A table in the cabin is the only piece of furniture that is from the Walker era. There were small rooms originally at the back of the cabin but they were removed by film companies for movie shoots.

The Walkers owned the property from the early 1900s to 1950, when it was sold to the State of California for a park. The Walkers preserved the land in its natural state and passed along this enduring legacy for future generations to enjoy. The historic Walker cabin has been restored and is available for tours during the Saturday family nature hikes.

The little house in the canyon was used by the family of 14 and has been featured in “B” movies and Walt Disney productions. Cowboy actors like Hoot Gibson and Roy Rogers starred in movies filmed here.

In 1842 gold was discovered near The Oak of the Golden Dream by Francisco Lopez. This was followed by cattle ranching, oil production and the movies.

According to the Historical Marker Database, marker #168 is inscribed: “In Placeritas Canyon, March 1842, Francisco Lopez Y Arballo, while gathering wild onions from around an old oak, discovered gold particles clinging to the roots of the bulbs. It is estimated that $80,000 in gold was discovered as a result of this discovery.”

1842 predates the more commonly held notion that gold was first discovered in California by James Marshall at Sutter’s Mill in 1848.

The local story is a bit more colourful said Kraus. “Jose Francisco de Gracia Lopez, while looking for lost cattle took a siesta under an oak tree. He had a dream of swimming in gold. His wife had requested he bring home some wild onions and while digging them up he discovered flecks of gold in the roots of the onions.”

Lopez, a former student of mineralogy, made the first authenticated find of gold in California in Placerita Canyon.

The tree, called The Oak of the Golden Dream, is surrounded by a fence, and the historical marker is placed nearby. It is at the end of the .3-mile Heritage Trail which starts at the Nature Center. 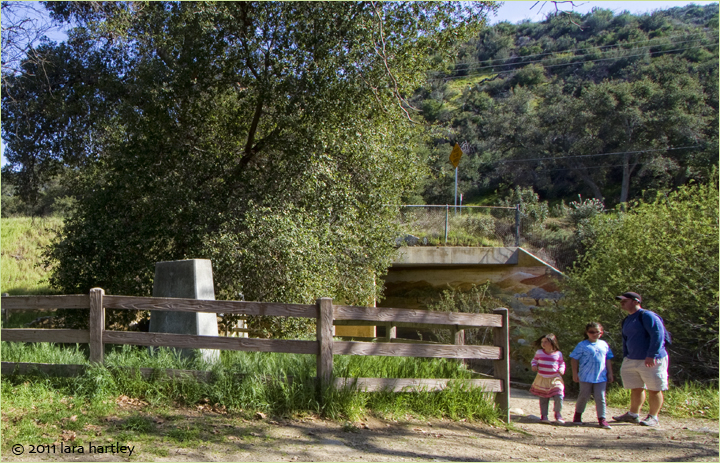 The Spitzer family checks out the Oak of the Golden Dream on a family outing. Eight-year-old Alexa had visited Placerita Canyon Natural Area the day before on a school trip and thought "it was really fun" and brought her family back on Saturday. Her favorite things were the hikes while sister Ariana liked Ferguson the Skunk.

In addition to gold, another rare mineral was found in the canyon — Placerita white oil — a rare see-through form of crude oil — clear as kerosene and able to burn 100 times longer than conventional oil.

A relative of Tom Walker would use the naturally refined oil to run his Model A Ford. You can still see the oil today on the grounds of the Nature Center.

“Wildflowers are not the reason most folks visit the Placerita Canyon Natural Area,” Kraus said, “but we have common plants with uncommon beauty.”

Beautiful indeed, a wonderful slice of nature next to urban sprawl.

For more information, maps and brochures and the FAQ:

More about the red-tailed hawk.

The Gold Rush in the Desert