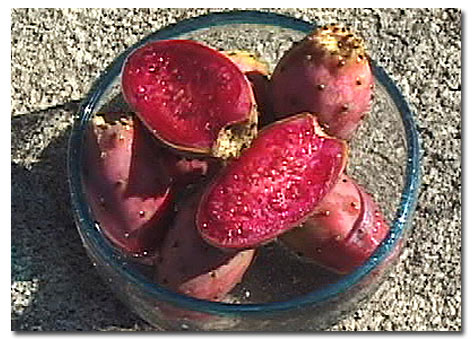 Prickly Pear Cactus have been a staple food of Native Americans for many centuries. Their large, colorful blossoms appear in yellow, pink, red or purple and grow from the tip of cactus nodules, which later ripen into delicious red fruit. Many varieties of prickly pear cactus grow wild throughout the deserts of the Southwest, but many are not native.

Some species of prickly pear cactus were introduced into North America from tropical America a number of centuries ago. The fruit of these cultivated prickly pear cactus is a common delicacy in Mexico and is sold in markets as “tuna.” While all prickly pear cactus are of the genus Opuntia, the non-native Opuntia megacantha is one of the tastiest and most popular. Some native species, especially those with
dark purple fruit, are not as flavorful. 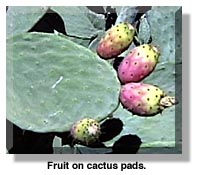 The flat-jointed paddles of the prickly pear are not leaves, but an adaptation of a stem from which the fruit grows. The cactus paddles, “Nopales,” are also a commonly used ingredient in Mexican recipes, including salads and scrambled eggs. (We will discuss the preparation of “Nopales” in a future article.

The prickly pear fruit normally ripens and is ready for harvest during the late summer and early fall months. When gathering the fruit, wear leather or rubber gloves to avoid contact with the cactus needles. They are a nuisance, especially the tiny soft-appearing barbs of glochids on the fruit itself. The glochids are very difficult to remove if you get them in your skin. A long-handled tong can also be used to pick the fruit from the cactus. Once you have harvested the fruit, you will need to remove the glochids by passing the fruit through an open flame or shaking the fruit in a bag of hot coals. The glochids can also be removed by cutting them away with a knife or peeling off the skin. Once the fruit is removed from the cactus, it will rapidly lose nutritional value and may ferment, so try to consume or process soon after harvesting.

After you have removed the glochids you can eat the fruit fresh, or prepare it in several ways. Prickly pear 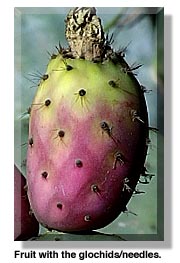 juice can be used to make jelly, conserve, marmalade or poured on salads. It can also be mixed with other juices to make smoothies, shakes, Prickly Pear Margaritas, Prickly Pear Lemonade and other refreshing beverages. Mixing the juice with 7-Up or ginger ale will give you a tasty drink similar to a Shirley Temple.

Prickly pear fruit can also be used in pies, dried for a snack food or used as a filler/topping for desserts.

If you would like to enjoy the products of the Prickly Pear we now stock a selections of jams and the prickly pear juices to use with our recipes. See below.

Select ripe prickly pears, including a few on the green side to add pectin if making jelly. Wash and rinse. Place in a pot with 1 cup of water and cook over low heat until tender (about 20 minutes). Mash with a potato masher and strain to remove seeds and fibers.

Follow the pectin manufacturer’s directions for adding ingredients and fast boil, stirring constantly. Bring to a hard boil that cannot be stirred down, boil for 3 minutes. Pour into sterilized jars and seal.

Wash and peel ripe prickly pears. Cut in half with a knife and scoop out the seeds. Force the raw pulp through a medium to fine strainer. Freeze either fruit pulp or the puree. Simply pack into freezer containers and seal. Thaw before using.

Shake all ingredients together in a covered jar. Makes about 1 cup . This pretty pink dressing is thin like an oil and vinegar dressing, but lower in calories. Good on fruit salads and tossed green salads.

Chop orange peel and pulp. Add 4 cups water to lemon and orange. Let stand 12 to 18 hours in a cool place. Boil until peel is tender. Cool. Measure lemon, orange and water in which cooked. Add chopped prickly pears and 1 cup of sugar for each cup of combined pear, lemon, orange and water. Boil to the jellying point. Pour, boiling hot, into hot jars. Seal at once.

Note: In California, it is illegal to collect or pick fruit within 100 yards of a road or highway. It is also illegal to collect fruit that is growing on private property or property designated as a protected area, including a state or national park. Source of recipes Desert Magazine.