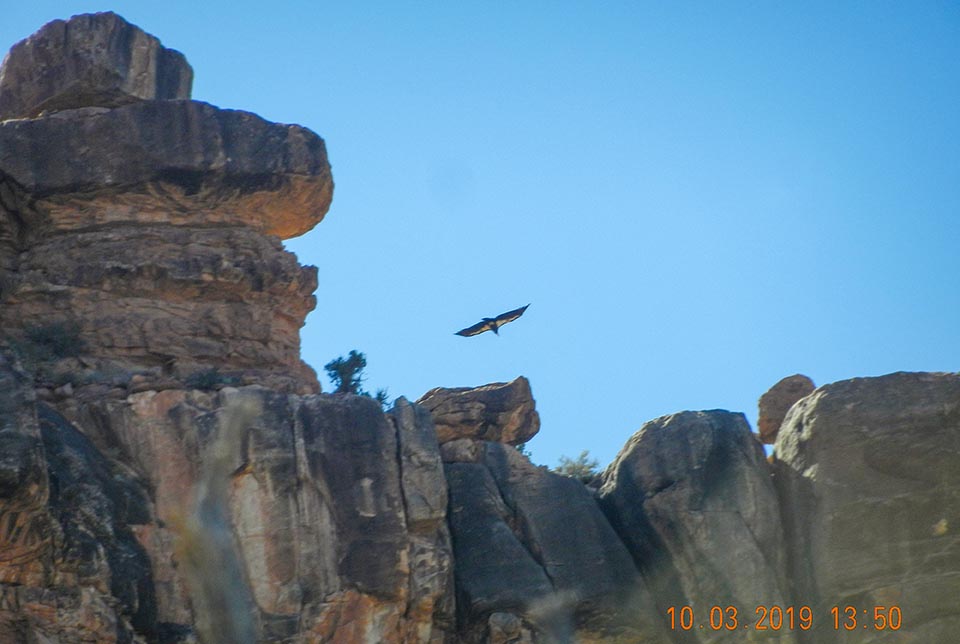 The father of the chick, California condor 521, flying in the vicinity of the O’Neill Butte nest.
NPS/Bob George

The nestling, identified by its stud book number of 1005, is estimated to have hatched on May 9 from a mating pair with stud numbers 423, a female with wing tag E3, and 521, a male with wing tag J1, at O’Neill Butte.

“We knew that the parents were exhibiting nesting behavior, and it took us a few months to locate it,” said Wildlife Biologist Miranda Terwilliger, Grand Canyon’s condor project manager. “One of our long time volunteers Bob George, known as Condor Bob, found the nest and chick.”

The mating pair had their first nestling, numbered 850 with wing tag T0, to successfully leave the nest, known as fledge, from the park’s Newton Butte in 2016. Number 1005 is the pair’s second nestling since number 850.

Positive documentation of wild hatched chicks are recorded with the San Diego Zoo, and they assign the stud book number for California condors.

There were 22 condors left in the world in the 1980s, which resulted in the development of the California Condor Recovery Program to save the species from extinction. Six captive-bred condors were released into the wild at Vermillion Cliffs National Monument by the Peregrine Fund in 1996, and since then, Grand Canyon has been a partner with them and others in the Southwest Condor Working Group to recover the population.

Grand Canyon provides a protected land resource for breeding, nesting and scavenging habitat with minimized threats. The park’s wildlife program monitors condor activity, population, nests, and overall health within the park boundaries as well as educates visitors about the species and recovery efforts. One of the highlights for the park was the first successfully hatched and fledged wild condor in 2003.

“It’s important to note that we wouldn’t be as successful without the help of our volunteers. It makes all the difference,” added Terwilliger.

The Peregrine Fund leads all condor releases for the Southwestern population at Vermillion Cliffs National Monument. The last public release was conducted on Sept. 28, and four captive-bred condors were released.

The Southwestern, or Arizona-Utah, recovery eﬀort is a cooperative program by federal, state and private partners, including The Peregrine Fund, Arizona Game and Fish Department, U.S. Fish and Wildlife Service, the Bureau of Land Management’s Vermilion Cliﬀs National Monument, Grand Canyon and Zion national parks, Utah Division of Wildlife Resources, and Kaibab and Dixie National Forests among many other supporting groups and individuals.