by | | Misadventures of Mitch Kumstein, Road Trips to Nevada | 4 comments 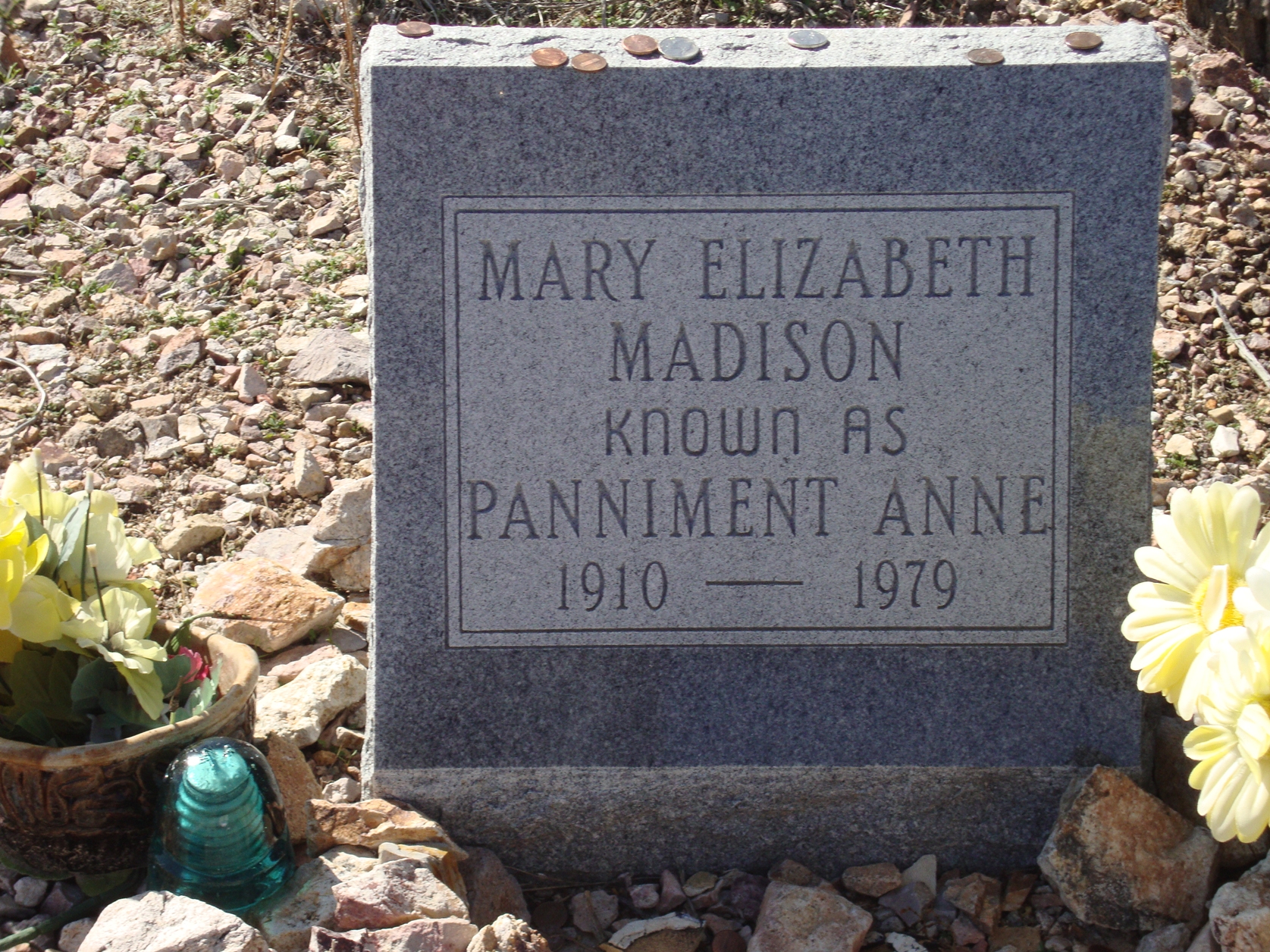 The grave marker of Mary Elizabeth Madison AKA Panniment Anne

“I think everyone deserves a little sanctuary.  A place where they can go and get away from traffic snarls, impossible work schedules, and shrinkin’ paychecks.  A place where there’s no political gridlock, world conflict, or media-fueled hysteria.  Someplace simple yet majestic, stark but full of life, and where a guy can talk to himself without bein’ put in a straight jacket.  And I think the best sanctuaries come with a dose of history.  That’s why my little spiritual safe haven is the Southern Nevada desert.  The desert is full of hero stories.  Unbelievable stories of  men an’ women who lived on nothin’ more than wits, gruelin’ work  and sheer determination.  I mean, sometimes I get scared just goin’ down to the mailbox.  I need extra butter on my popcorn or I won’t eat it.  And we’re not stayin’ anywhere without Wi-Fi, ARE YA KIDDIN’?  It’s hard to imagine life without Starbucks, but that’s exactly why I’m drawn to the desert.  Sleepin’ under the stars, livin’ off the land, stakin’ your claim, and associatin’ with some of history’s most authentic characters.  And there’s probably no character more unique and unusual than Mary Elizabeth White,  commonly known in these parts as Panniment Annie.

Annie’s rebellious nature included an early marriage at 15,  and then leavin’ her husband in Boston to run bootleg whiskey from Canada to Chicago.  She worked her way West as a ranch cook in Texas, New Mexico, and Colorado before contractin’ tuberculosis.  The sickness forced her to the hot, dry climate of the Shoshone Hot Springs  area where Annie took up minin’, and discovered a lifestyle that was with her the rest of her life.  The back of an old 1929 Model A became her home away from home, livin’ on a diet of snake meat and jackrabbit stew (no Denny’s, I guess).  Over the next 20 years, Annie became known as the roughest talkin’, farthest spittin’, best minin’ prospector in the region, and her skills as a car mechanic and poker player were legendary.  When she’d strike it rich in the fields, she was famous for either blowing’ it or given’ it away as fast as she made it.  And she was as rugged as anyone who ever staked a claim.  Stories of her toughness spread, such as the one that told of her drivin’ herself 100 miles to Las Vegas after breakin’ her back!  I mean, I get paralyzed with a splinter!  And Annie didn’t shy away from speakin’ her mind, even if it was “politically incorrect” at the time.  She believed in equality for women, and was one of the first vocal supporters of “equal pay for equal work”.  She felt that women should be independent and equal in all ways.  She was also someone you wouldn’t want to meet in a dark alley, and never shied away from a good bar room brawl.

Annie roamed the desert until her death at 69 years old, finally taken out by a combination of cancer and arthritis.  I paid my last respects a few days ago, and just the sight of her tombstone in the Rhyolite cemetary made me wish that I could have started my adventures durin’ her life.  I would have had her do some wrenchin’ on my truck, probably lost a few bucks to her in a poker game, and hopefully had some of her independent spirit rub off on me.  I left some money on her headstone…. probably would have lost it to her, anyway.”