Headin’ out of my new digs at the El Portal Motel, and thinkin’ about pointin’ the 660 towards Rhyolite, a famous ghost town located about 5 miles southwest of Beatty.  The place was rockin’ back around 1905 through 1907, and once sported a population of over 10,000!  Now, just a few remnants of that boomtown remain, so I’m off to discover not only what it is now, but what made it tick back in the day. 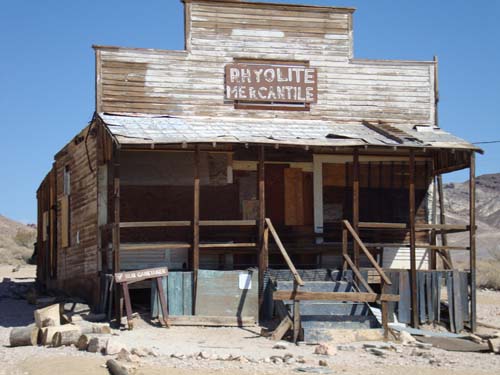 Rhyolite was the largest and most famous of the settlements that made up the Bullfrog Mining District, but as I headed to a spot where I thought the story was, I kept passin’ areas with names like…Montgomery Pass, Montgomery-Shoshone Mine, Montgomery Mountain.  Well, Bob Montgomery and his discoveries actually turn out to BE the story, and those discoveries were the very reason that Rhyolite came into existence in the first place!  Bob was a miner who had worked all the famous mining areas of the West, and came down from Goldfield to check out the next hot area-Bullfrog.  In Beatty, he hooked up with a Shoshone Indian named Hungry Johnny to help him comb the foothills outside of town.  After filing three separate claims, he struck it rich at what became the Montgomery-Shoshone Mine, and soon the rush was on! 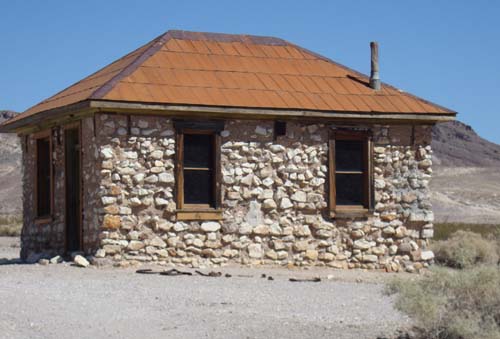 Montgomery spent the next year pullin’ out sum ore, and tryin’ to market his claim for a quick sale.  Soon, out came Charles Schwab, the “Steel King”, and agreed on a price for ‘ol Bob’s holdins’.  Now, what about Hungry Johnny?  Johnny was with Montgomery on all three claim discoveries, but the miner had two other partners in his first claim, Louis Finnegan and Pat O’Brien  Even though Shoshone 1 was basically worthless, they were lookin’ for a little payday, and  held up the sale by suing for $100,000.  Hungry Johnny was called to testify whether or not Finnegan and O’Brien were with Montgomery when he discovered Shoshone 3, but when it was time for him to testify, Johnny disappeared!  They finally found him about 300 miles away in Owens Valley, and he refused to return because he thought he would be arrested if he couldn’t remember all the details.  (I can’t remember what I did last week, so I know how he felt..) 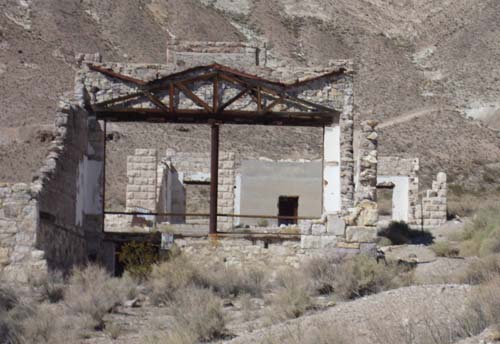 An old building in the ghost town of Rhyolite.

Well, the trial went on without him, and Montgomery ended up winning and selling the mine to Schwab.  The “Steel King” dumped a ton of money in upgradin’ the mine, sold a bunch of mine stock, and the whole thing folded (along with Rhyolite and virtually all of the Bullfrog District) by 1910.  Talk about a massive Ponzi scheme!  At one time there were over 200 mining companies operatin’ at Bullfrog, with 200 MILLION! shares of stock sold in these companies, and only a handful ever produced any ore!  Stock share prices were artificially raised every month creating demand, and the poor investors never knew there was a problem until it came time to cash in their shares!  Man, history is kinda circular, huh?

Well, I’m outa ice again, so back to the El Portal for a nice swim and barbeque with sum locals.  I’m postin’ a couple of pics of Rhyolite, but keepin’ Montgomery-Shoshone my little ‘ol secret….(now where is that metal detector?)…Hey, by the way, anybody wanna buy sum stock?” 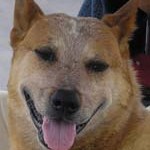