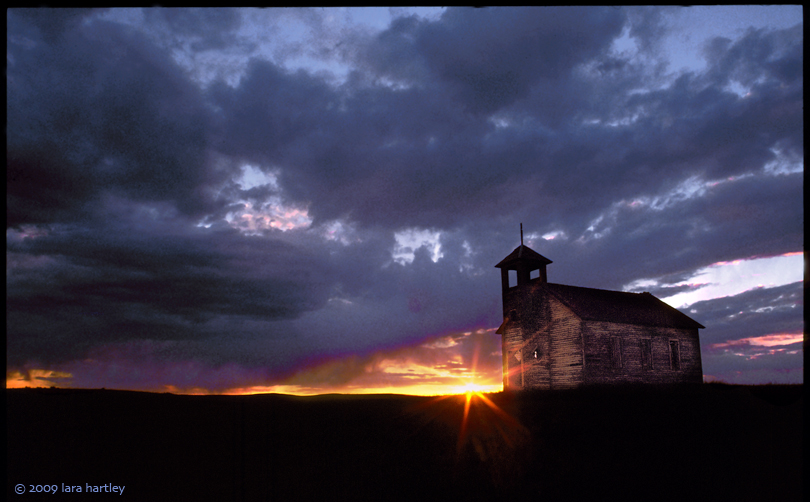 This image of the abandoned Cottonwood schoolhouse in Northeastern Montana is an example of how to use the Rule of Thirds in a landscape photograph.

Composition and how you frame an image determine the difference between a bad photo and a good one. Now, if you like your photos with heads cut off, big empty spaces around things and a little kid whose face is so small it’s hard to pick him out of the pumpkins he’s sitting in, then this lesson is not for you.

But of course, you want to make better images so here are some basic rules for you to learn.

The nice thing about rules is that when you understand and use them, you become freer to break them.

As a ‘rule’ it is not a good idea to put your point of interest in the center of an image, that is pretty boring. Whether it be a portrait or especially a landscape, the artistic Rule of Thirds produces a more interesting image.

The Rule of Thirds

Imaginary lines are drawn dividing the image into thirds both horizontally and vertically. You place important elements of your composition close to where these lines intersect. (see illustration) You can also place things in bands that run through those intersections, above the lines or just below. In addition to not placing things smack dab in the middle of the photo it is not a good idea to place things in the far corners or at the extreme top or bottom — unless that empty space tells us something about the graphic element.

I like horizon lines a little further above the upper third intersection or below the lower third line because it creates a little more visual tension. Always working within the Rule sometimes creates too balanced an image.

When looking through the viewfinder or at the LCD screen, we tend to look carefully at the elements that are important to us. They seem larger than they really are. By using the Rule of Thirds, you position things relative to the edges of the frame. That helps get rid of the “tiny subject surrounded by vast empty space” syndrome.

In the accompanying image, the old schoolhouse in Cottonwood, Mont. is placed in the lower third area of the image. The horizon line bisects the image below the lower third line. The dramatic clouds add interest to the big sky in the rest of the image. That huge negative space helps tell the story of the lonely abandoned building on the Montana prairie.

Yes, we are back on that — again! Here are some other design tips which will help you improve your image making.

• Kill the clutter and extraneous “stuff” that are a distraction in your photo. Make a clean image unless the stuff is part of the storytelling.

• Be aware of subject/ground relationship. Simply put, look at light elements on dark and dark on light. If all the elements in a photo are too close together in color and greyscale, then nothing much stands out. It all becomes a jumble — like the previous lesson’s scenic from Cedar Breaks.

• Be aware of how the elements in your photo relate to each other. A telephone pole that seems to be far away in three-dimensional space, becomes a pole growing out of someone’s head in two-dimensional space.

Again, once you understand the ‘why’ of the rules then you can break them to make more interesting images.

Next column: Leading lines and where they are going.

“Anything that excites me for any reason, I will photograph; not searching for unusual subject matter, but making the commonplace unusual.”