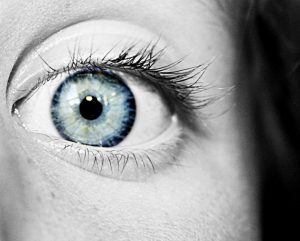 The lens aperture on a camera acts like the iris and pupil in your eye, opening and closing to let in varying amounts of light. Photo by Curtis Fletcher / stock.xchng.com

What’s with this manual mode stuff when we have a camera that does perfectly good auto?

There are times when you are going to want to override your camera’s settings for shutter speed and aperture — and they are directly related to each other.

I explained this to a friend of mine using sound effects that she said really helped, but alas, I didn’t record myself.

The shutter is what opens to allow light coming from the lens to hit your camera’s digital sensor. Think of it as a fast-moving or a slow-moving sliding glass door.

The aperture is part of the lens that opens and closes determining how much light goes through the lens to the shutter and then the sensor. Open your hand flat and then close it down into a small peephole/ fist. That is rather how the aperture works on your lens. (It’s better with sound effects.) It is just like the pupil in your eye, opening and closing to let in light.

As the hole gets smaller, less light is coming through the lens. The smaller the aperture, the more depth of field there is — the front to back distance of an image that is in focus.

In reducing the size of the aperture, you have to compensate for the loss of light by making the shutter stay open longer.

We measure this light in terms of f-stops and fractions of a second. So for every stop of light you lose by closing the aperture, you must slow the shutter down by one stop to allow in more light.

Working in manual mode means you can have more control over the final image even with a point and shoot camera.

Now, why would you want to have more control?

The Luminous Landscape (www. luminous-landscape.com) says it best — “When taking landscape photographs for instance, the object mostly is to get everything from foreground to background in sharp focus. So you will need large depth of field. To achieve this, set an aperture of f16 or f22. In aperture priority the camera will then automatically select the right shutter speed but in full manual, you will have to decide the right shutter speed for a correct exposure of the scene.

The effect is even stronger when using tele lenses as their depth of field is very shallow at any setting. With wide-angles the effect of a large aperture will be less obvious.

When taking macro photos, manually select a small aperture (f11 or f16) to get as much depth of field as possible.”

Another reason to adjust your camera manually is to make sure white is white and black is black or as close are your camera can tell.

Cameras evaluate a scene, average the range of contrast and then settle on somewhere in the middle to be middle grey. But have you ever taken a shot on a cloudy snowy day and the image comes out looking kinda grey? The sky is grey, the snow is grey and it’s pretty dismal?

That’s because there is nothing much in the scene that goes outside of the middle grey. All cameras, even the fancy digital SLRs do this. Some have more points in the image to look at but in auto mode they are all averaging the scene to a midpoint. The grey snowy day scene is a perfect time to use manual mode.

The camera looks where you have pointed the camera, the white snow, and thinks “middle tone grey” also called 18 percent grey.

You know that snow is not grey, but white, so if you open up your aperature more, letting in more light, then the snow will brighten up. Two stops is generally enough. In this instance because you want more light in, you do NOT adjust the shutter speed.

If you want a nice amount of depth of field and want more light, then don’t fiddle with the aperture, instead slow down the shutter. You have to fool the camera and overexpose the scene to make sure the white snow is looking pretty and fluffy. On the other extreme, if you are shooting lots of dark vegetation and you use your camera on auto guess what color the dark shade are going to look. That’s it — middle tone grey! In this instance you have to underexpose the scene by about one stop so that the darks are truly dark. This is also true of shooting night-time scenes. A couple of tips for shooting in these conditions:

Ensure that your digital camera has full manual mode and allows access to the full range of slow shutter speeds in that mode. Take lots of shots with different shutter speed/aperture combinations. Immediately review the shot as soon as you’ve taken it. Ensure your LCD brightness is set to Normal, not Bright, for a truer representation of your recorded image. A good aperture to start with is f4.0 or f5.6 or bigger (for greatest depth of field), and adjust shutter speed up or down until you’re satisfied with the shot.

The lens aperture on a camera acts like the iris and pupil in your eye, opening and closing to let in varying amounts of light. Photo by Curtis Fletcher / stock.xchng.com