Last time we talked about using your camera in manual mode and the relationship between aperture and shutter speed. Reiterating — aperture controls depth of field and shutter speed is important for stopping movement — or not stopping it.

Sometimes you want to freeze the action — a kid kicking a soccer ball, the tight end just catching a pass, a flower swaying in the breeze. Fast shutter speeds can stop the action at a key point. 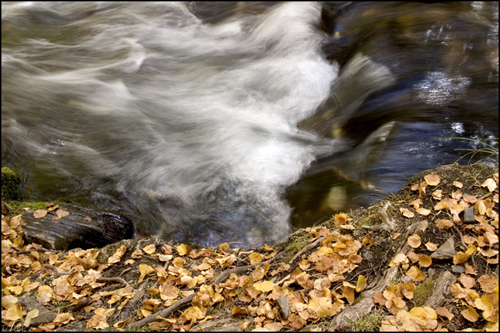 The rushing waters of McGee Creek in the Eastern Sierra Nevada Mountains.

Showing movement is difficult in a still image. (ok duh) But how do you show movement then? By letting certain parts of an image blur you can give the illusion of movement.

In the image above of McGee Creek, a shutter speed of 1/5 second was used to smooth the rough water into an illusion of motion. If I had shot this at a faster speed the water would have looked like it was made of plastic wrap. Vary your shutter speeds to see the effects the different speeds have on your moving object.

Another effective use of a slower shutter speed is when photographing dance. The blur of arms and legs gives the viewer a sense of freedom — abstract moving color. By freezing the action you can see facial expressions and body positions. It is your vision of the moment that determines how you photograph movement.

Both of these examples require the use of a tripod because you can’t usually hand hold a camera still enough to get the nonmoving parts sharp and the moving parts nice and blurry. 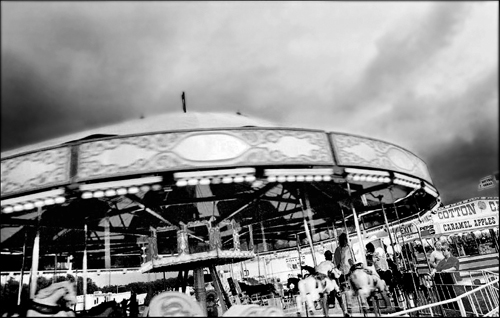 Storm clouds gather over a carousel in Fort Dodge, Iowa. Notice how even a slightly lower shutter speed can add blur and motion to an image.

I was lucky it was a very overcast day when I shot the carousel. It was dark enough that I was able to use a slower shutter speed of about 1/25 of a second which allowed for some blur of the tent section of the ride. Because the shutter speed was slow, the corresponding aperture was very small making just about everything from front to back in focus.

What if what you are shooting isn’t moving? How can you use the slow shutter speeds to create an effect? — by moving the camera while the shutter is open.
This is another one of those “practice until you like it” scenarios. It isn’t something you would want to do all the time, but once in a while it works. It can add an air of mystery and magic.

So take out those cameras and experiment! There are no mistakes, only learning experiences.

Storm clouds gather over a carousel in Fort Dodge, Iowa. Notice how even a slightly lower shutter speed can add blur and motion to an image.