You can sit at a counter, a table or in a red vinyl booth. Most likely the waitress will call you “Hon” as she hands you the menu — unless you are at the Village Cafe in Barstow. Owner Henry Wong does not call anyone “hon.”

Finding good food while getting your kicks on Route 66 is not a problem. Choices run the gamut from American Diner to Chinese. There are many eateries on the Mother Road, but I chose five nearby to explore. 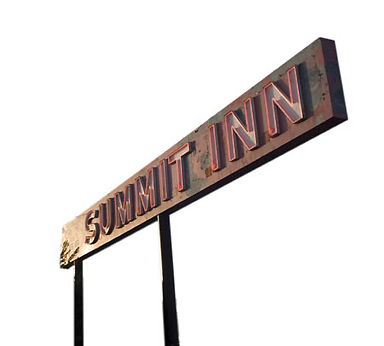 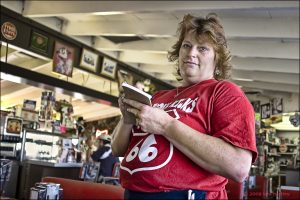 Dianne DuVall, a waitress at the Summit Inn asks, ‘What can I get you hon?’ as she seats customers.

I started my multi-day culinary expedition at the Route 66 landmark, the Summit Inn, located at the top of the Cajon Pass in Oak Hills. This ’50s cafe is owned by Apple Valley resident C.A. Stevens. He is only the second owner of this cafe (where Elvis was rumored to have visited) and has preserved its vintage American feel.

The coin-operated fortune-telling napkin holders still work — ask them a “yes” or “no” question to get a look at your future. The restaurant acts as the “local country club because there is nothing else here,” says Terry Kostak who lives nearby. “Without this place we would all go nuts.” Locals like math teacher Phil Kimmel appreciate the cafe for its good food and quiet atmosphere. “At Chili’s, it’s so noisy,” he said. “It is more laid back here, homey. It reminds me of restaurants in the Midwest.” Kostak says, “It would be a shame if anything ever happened to this place. The owner has turned down offers from Denny’s and other big name chains.”

My dinner consisted of chicken-fried steak, like my mother used to make and beer-battered onion rings. (My mother would have never thought of those.) Wow, those were awesome. I have to go back just for a big order of those onion rings, the heck with my cholesterol! 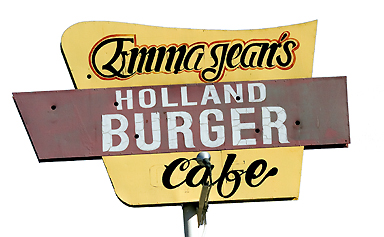 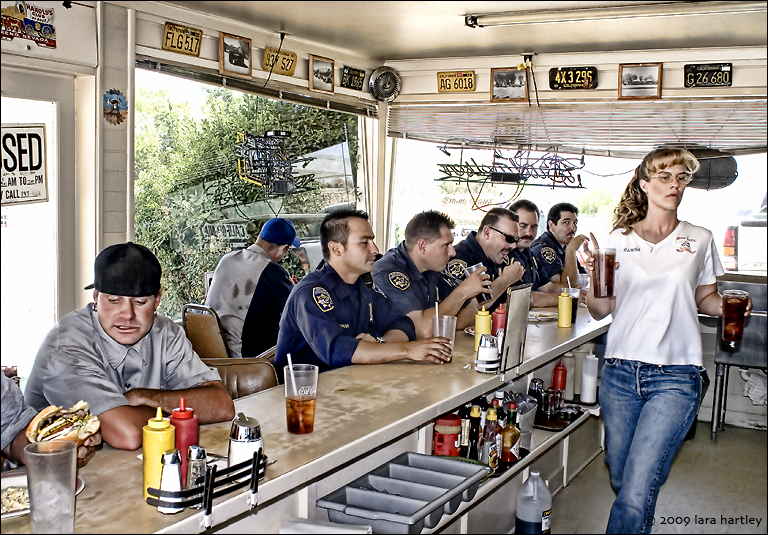 Retired miner, truck mechanic, cement plant construction worker and military man John Duncan came to the High Desert in 1958. And he says he has been coming to the Holland Burger Truck Stop since that day.

This visit he was enjoying soup with his grandson. Any soup will do for him “except split pea,” he said.

Owner Richard Gentry bought the old Holland Burger for his wife Emma Jean in 1979. He added her name to the oldest restaurant in Victorville making it Emma Jean’s Holland Burger Cafe. That’s a mouthful and most folks seem to just call it “Holland Burger.”

There is a noisy camaraderie here. Locals call to each other across the sunny room, cracking inside jokes while waiting for their meals. When I visited, a row of California Highway Patrol K-9 officers took up half the counter. Their dogs waited impatiently outside in air-conditioned cars, barking furiously at anyone that dared get too close. The rest of the eatery can maybe seat 15 — if everyone gets real cozy.

I tried the famous Brian Burger, named after Richard and Emma Jean’s son Brian. The full-size sandwich was too much for me so I indulged in the Petite Brian. A glass of iced tea, strong enough to pucker my lips and give me a buzz for the rest of the day, completed the tasty meal. 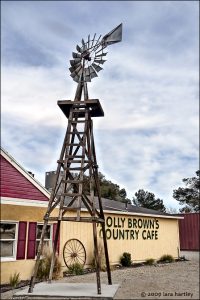 An old windmill seems appropriate next to Molly Brown’s.

Truck on down National Trails Highway to Helendale where manager Linda Coddington takes care of customers in one of the newer restaurtants on the Mother Road. Molly Brown’s County Cafe, one of four owned by Diane Brown in the High Desert, has been in this location for two years.

The diner is located in a historic building that was originally a restaurant. Since its inception it has gone through several incarnations, including a real estate office, antiques store and now back to its original purpose.

Before I even went inside, a guy on a Harley told me “the food is great!” (Guys on Harleys are such a friendly bunch.)

The ambiance is a bit spare, 80s-style table and chairs, nothing remarkable, but indeed the food was great. I made sure I was hungry before arriving at the cafe, not wanting to overstuff myself.

I thought I would take it easy and not order anything too big. So I asked for biscuits and gravy with sausage links. Typical American comfort food. The biscuits were huge! Each one the size of a small plate and there were four. Oh my. One biscuit and I was full. I took the rest home to a friend.

A little warning: the food is a bit on the rich side, so splitting an order is a good idea.

I asked Coddington which was the most favored item on the menu. Seems more people order the Hobo Skillet, which includes a variety of yummies like fried potatoes with bacon, ham, sausage and bell peppers. I wonder how many people it takes to finish one of those off.

The skillet meals are not the largest platters of food in the cafe. That honour goes to “Our Big Breakfast.” I am not sure of the total weight of this meal but it has to be pretty heavy since it could probably feed both teams at the Super Bowl, or maybe just one team.

The Big Breakast consists of:

I asked Linda who would order this family style breakfast and was relieved to hear that it was more for parties than a single person. Well, that’s good. What a great idea for Super Bowl Sunday! Hey, let’s have a party at Molly Brown’s Country Cafe. 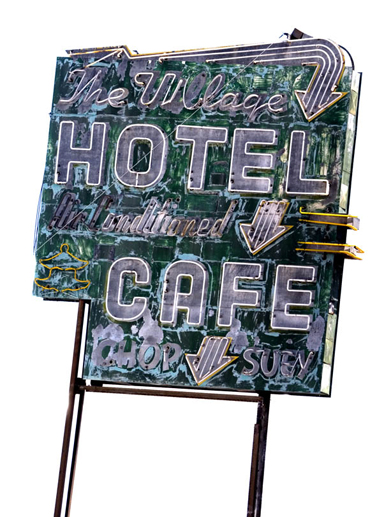 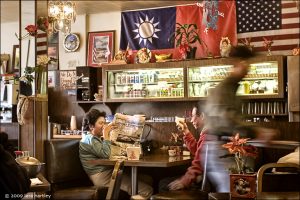 The old neon sign is faded and hard to read, and the little cafe almost disappears into the cityscape. But it is worth the hunt to sample the authentic Chinese food prepared by owner Henry Wong. He also serves American fare, but it is the Chinese meals that keep me going back. Wong has owned this charming hole-in-the-wall for more than 30 years.

I am particularly fond of the chow mein with pan-fried noodles. Excellent — especially with a little hot chili oil added. The decor is eclectic. Chinese decorations are scattered about as well as honorary plaques for Henry and framed old newspaper stories. Brown cafe tables and chairs complete the look of another time.

Henry is an entertaining host with a variety of tales and lunch can go by much too quickly. 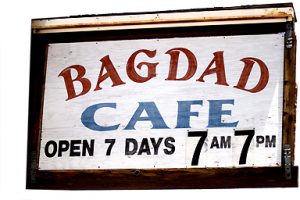 Italian honeymooners were dining on more American comfort food at the Bagdad Cafe when I arrived during my food tour.

“I Still Haven’t Found What I’m Looking For” from U2’s “Joshua Tree” album provided the perfect backdrop for the Italians’ lunch. 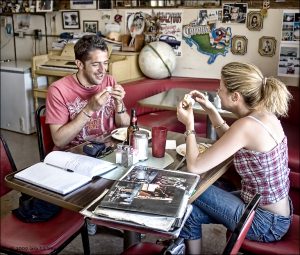 Angelo Massimo Gangi, 33, and new wife Erika Genovese, 32, were on their honeymoon which included stops in Las Vegas, Palm Springs, San Diego — and the Bagdad Cafe in Newberry Springs.

Waitress Emily Lattimer was on her own that Saturday. Recent days had seen 70 German bikers and several bus loads of French tourists. “We were packed,” Lattimer said, tiredly. She pushed the buttons on the vintage jukebox and the haunting “Calling You” from the film “Bagdad Cafe” came through the old speakers.

The film is still a cult favorite in Europe and the cafe is listed in several travel guides making it a must-see for tourists fascinated with Route 66. 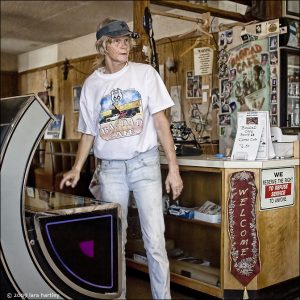 Emily Lattimer chooses a tune from the vintage jukebox in the Bagdad Cafe.

The movie was shot at the diner when it was still named the Sidewinder but the name was eventually changed to capitalize on the film’s popularity.

Since it was my last stop for that day I decided on dessert — owner Andre Pruett’s homemade apple pie. Not too sweet with tart apples and a truly flaky crust, it was the perfect desert.

Apple pie and Patsy Cline on the old jukebox. It doesn’t get any better than this.

Directions: The Summit Inn is located at the Oak Hill exist via either north or southbound Interstate 15 at the Cajon Summit.

Don’t miss: Brian Burger. Made with 1/2 pound of hamburger, ortega chilies, Swiss cheese, grilled on a 1-inch-thick sourdough bread with parmesan and garlic. Also comes in a smaller size.

Directions: Near the corner of Main Street and Second Avenue.

Don’t miss: Chow mein with a variety of meats or shrimp. The pan-fried noodles are the best with Henry Wong’s chow mein.

Directions: Located on Route 66/National Trails Highway, east of Newberry Springs. Don’t blink or you will miss the little town.

Don’t miss: The Jack Palance burger which is half the size of the Zack burger — a double-bacon cheeseburger.