Titus Adventure with a Stop in Beatty 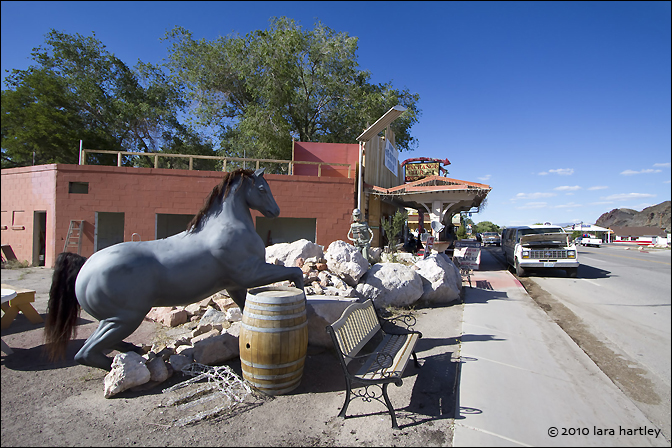 I ran into a friend the other day who asked me, “Did you take your road trip to Titus Canyon in Death Valley last weekend?”

Road trip. For some of us those are the most romantic of words. They conjure up all sorts of wonderful images. Motel living. Dining out. Seeing new sights. Meeting new people.

ABOVE: The Beatty Club, in Beatty, Nev., is in a perpetual state of renovation and the landscaping holds some unique artifacts.

My answer to her was “You betcha!” And oh my, what a wonderful trip it was.

First stop, Beatty, Nev., population 1,100, there-abouts. Perfectly situated a few miles from the beginning of Titus Canyon Road, Beatty is an excellent place to meet a few characters, hang out in bars and get a good night’s sleep before tackling the jarring washboard road through Nevada’s part of Death Valley. 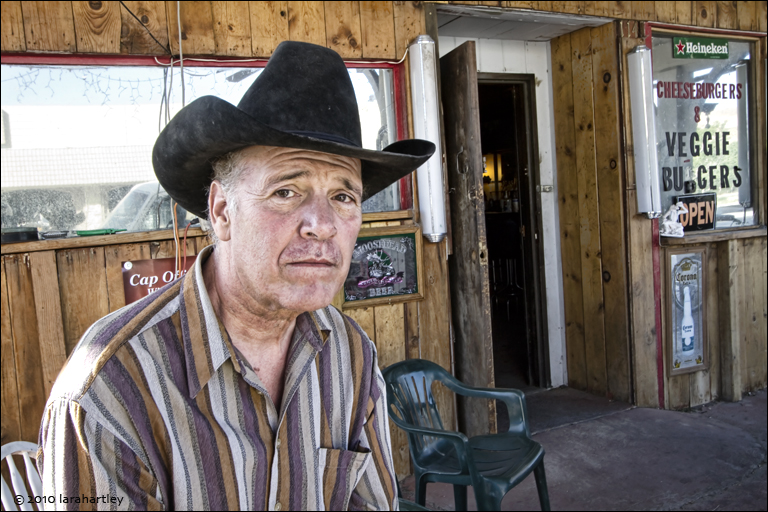 Alpheus Bruton has been the owner of the Beatty Club since about 1998 and was the first person I struck up a conversation with in Beatty. The bar in the club is Art Nouveau with lovely curved corners. If I remember correctly, the bar was originally from the ghost town of Rhyolite 4 miles away.

I am not much of a bar person but as I was walking along the town’s main drag taking pictures people kept stopping me, asking what I was doing. They plied me with Diet Pepsi and stories and insisted on showing me an interesting men’s bathroom. Seriously. 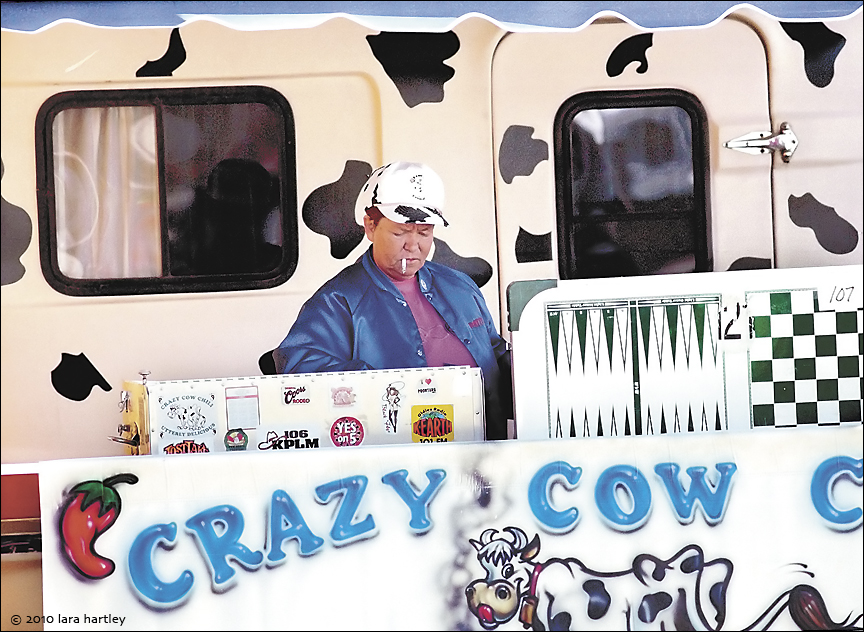 Patti Summers stirs a pot of her husband's chili at a cook-off in Barstow, Calif. in the late 1990s.

I was talking with one man, standing on the front porch of the Happy Burro Chili and Beer, who had a T-shirt on that said “Crazy Cow Chili.”

Wow, that was interesting. I told him I had photographed a woman several years before at a chili cook-off in Barstow and described her pink trailer with cow spots on it that said “Crazy Cow Chili.”

He gave a holler into the interior of the bar and out came the same woman — his wife! She was tinier and a little more wrinkled than I remembered, but still the same face — they were the owners of the establishment. And he had won the chili cook-off the year I photographed the pink cow! 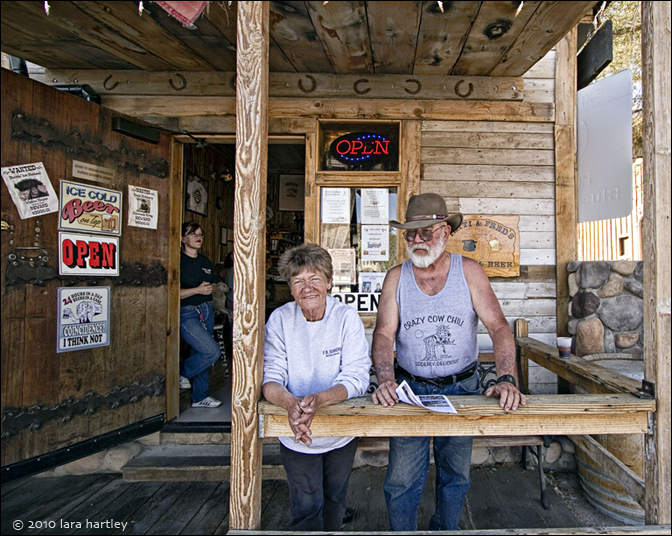 Patti and Fred Summers greet visitors ambling down the street in front of their bar. 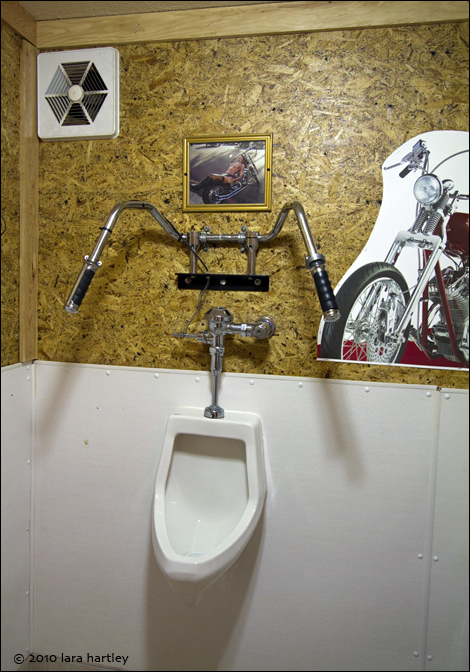 Harley handlebars add an interesting look to the mens bathroom at the Happy Burro Chili and Beer club.

A small-world moment. Then I was dragged off to check out the men’s room. There it was: motorcyle posters, tacky chick photos and a urinal complete with a toilet flusher made to look like Harley handlebars. A quick twist of the hand grip and “swoosh.”

Beatty bars were proving to be pretty interesting but it was time to get a motel for the night and a meal.

If you stop in at the Happy Burro tell the folks there Lara sent you.

Read DUSA in July for the rest of the Titus Canyon story. 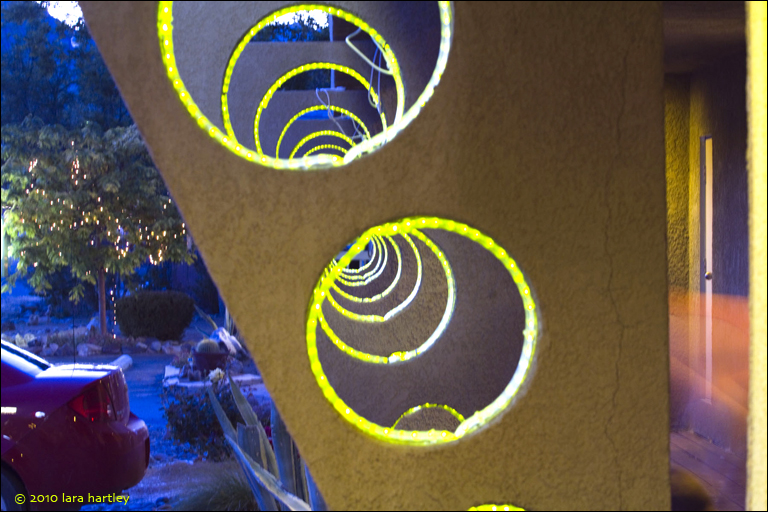 Lit rocket-like fins decorate the outside of the Atomic Inn in Beatty, Nev.