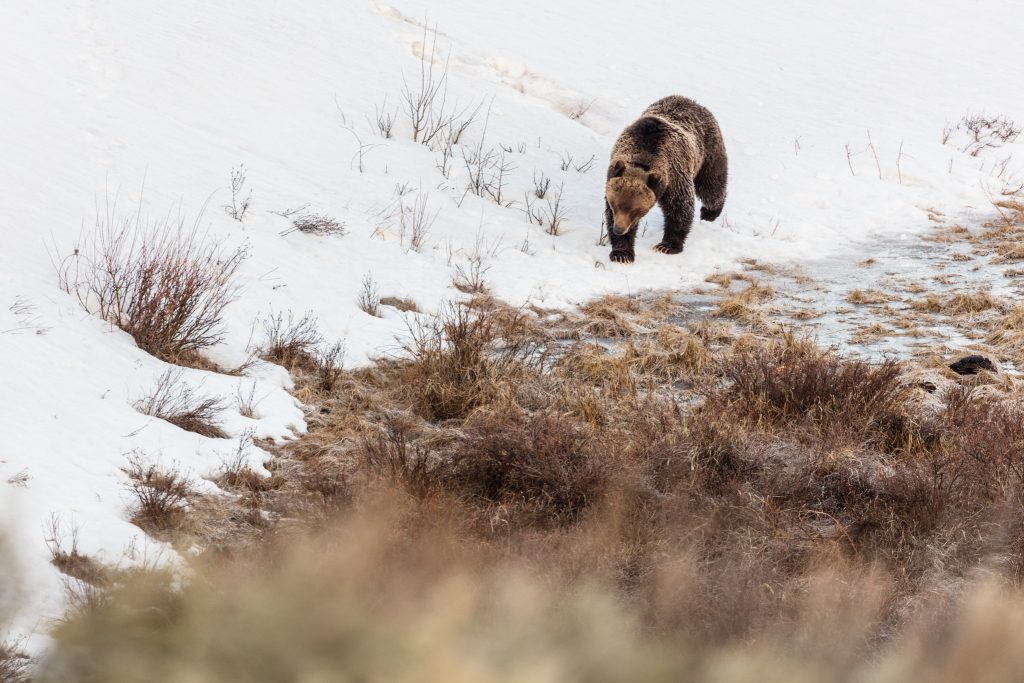 bear walking on the edge of a snow bank
Grizzly boar walks along the edge of Blacktail Ponds
NPS / Jacob W. Frank

MAMMOTH HOT SPRINGS, WY – On Saturday, March 13, 2021, a pilot supporting park wildlife studies saw the first grizzly bear of 2021. From the air, the pilot watched the bear interact with wolves at a carcass in the northern part of the park. This is the first sighting of a grizzly bear in the park this year, although tracks have been seen on several occasions in the last two weeks.

The first bear sighting of 2020 occurred on March 7.

Male grizzlies come out of hibernation in early March. Females with cubs emerge in April and early May. When bears emerge from hibernation, they look for food and often feed on elk and bison that died over the winter. Sometimes, bears will react aggressively while feeding on carcasses.

All of Yellowstone National Park is bear country: from the deepest backcountry to the boardwalks around Old Faithful. Protect yourself and the bears people come here to enjoy by following these guidelines:

“When bears first emerge from hibernation, they look for carcasses at lower elevations and spring vegetation in thermal meadows and south-facing slopes for nourishment,” said Kerry Gunther, the park’s bear management biologist.

While firearms are allowed in the park, the discharge of a firearm by visitors is a violation of park regulations. Bear spray has proven effective in deterring bears defending cubs and food sources. It can also reduce the number of bears killed by people in self-defense.

The park restricts certain visitor activities in locations where there is a high density of elk and bison carcasses and lots of bears. Restrictions began in some bear management areas on March 10.