The Calm of the Canyonlands 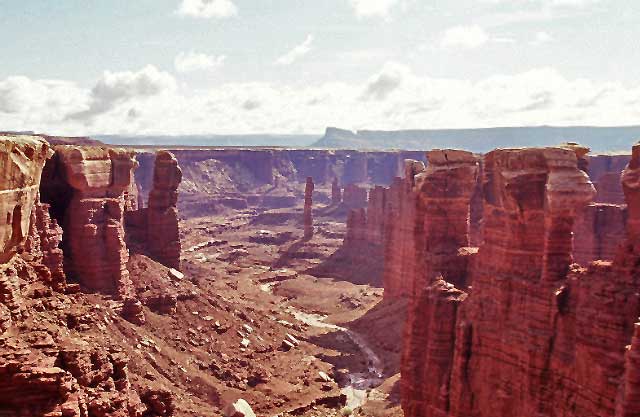 Utah's Canyonlands look as alien as Mars. Shades of red dominate the landscape, swathes of it decorating every sheared-off cliff and jutting spire. The pale blue sky, the scattered green vegetation, and the rocks' alternating bands of pale sandstone merely emphasize the deep oranges visible in every direction but up. Even the dirt is a coppery hue.

Red may have a reputation as a stimulant and a symbol of passionate emotions, but on the second day of our backcountry camping trip in Canyonlands National Park, we find the opposite is true. We're relaxed, unworried. Even our children, two- and four-year-old boys, have abandoned their boisterous shouts and wiggling limbs to the stillness.

Such paradoxes are common in canyon country. For example, the scant eight-and-a-half inches of annual precipitation slicks layers of ancient riverbeds and sand dunes now compacted into stone. And the gorges snaking through this high desert were carved by none other than the two great rivers, the Green and Colorado, that collide within the park. 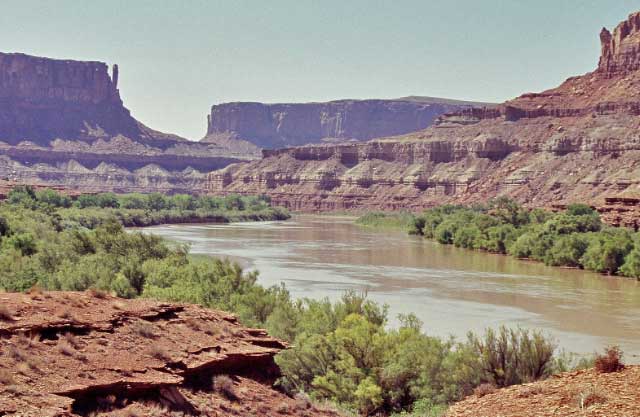 When John Wesley Powell explored the Green River in the mid-1800s, he found “cathedral-like buttes towering hundreds or thousands of feet and cliffs that cannot be scaled and canyon walls that shrink the river into insignificance.” Our journey began on the largest of these buttes, the “Island in the Sky,” at the top of the Shafer Trail

The old jeep road clings to immense rock walls on its zig-zagging route to the less-eroded plateau, or white rim, of sandstone 1,200 feet below. As our four-wheel-drive crunched over the loose rocks and dirt of the narrow trail, the etched red cliffs towered ever higher over us. Large piles of rubble – sheared off from the vertical expanse – lay jumbled at the bottom. As rain falls here, it oh-so-

slowly frees tiny grains from the sandstone and weakens the formidable rock structures on every side.

Precipitous dropoffs and rockfalls were very much on my mind as we jostled along our route, which soon forked off to the White Rim Trail. Although we had descended a great distance from the mesa top, we were not at the bottom of the canyon yet. That was another 1,000 feet below us. The road hugged the lip of the canyon for much of this leg of our 100-mile journey. What led me to believe spending several days camping along this remote trail was a good idea?

If I didn't watch my kids every minute, would they plunge off the cliffs? How would we possibly keep them entertained for long mornings in their car seats, followed by long afternoons playing by the tent? My stomach flip-flopped even though we had requested safe campsites from the park ranger who took our reservation.

But by the afternoon of the second day, I was no longer worried. About anything.

In the face of the mighty sentinels of sandstone, resolute against persistent attacks of water and scouring sand, the trivial details and concerns of everyday life fell away. What mattered was being.

Besides, there was no room for worries in the wonderment. As the trail curved, the massive mesa was a constant companion to our right. However, on our left, the flat expanse of the plateau plunged to deep-cut canyons. Musselman Arch's narrow span seemed suspended in the air. Washer Woman Arch, with its tall stooped side melded to it as if standing with a shorter companion, came ever closer before fading from view over our shoulders.

Once past the arches, and the people who flock to the more accessible parts of Canyonlands National Park, silence reigned across the high desert. Although a powerful force at times, the wind gently brushed the short grasses and junipers as the sun heated our skin. The land seemed devoid of life, with only an occasional fly for company. On our four-day trip, we encountered only a few vehicles and perhaps a dozen mountain bikes.

These canyonlands have not always been so empty. Petroglyphs and pictographs are scattered through the area, a testament to the Fremont and ancient Puebloan Native Americans who roamed these lands. Later, ranchers grazed their cattle here. And as recently as the 1950s, it attracted miners for its rich deposits of uranium.

But perhaps the most intriguing use of the land was by cattle rustlers and robbers in the late 1800s. Outlaws such as Butch Cassidy and the Sundance Kid favored a broad swath from Brown's Hole in the north to Robbers Roost in southeastern Utah. As the Denver News reported on March 4, 1898, “This strip of country is rugged and broken and almost impregnable by a stranger, and abounds in caves, deep gorges, and strongholds from which it is impossible to dislodge the outlaws who have trails unknown to any except themselves.”

Loot would be easy to hide in the jumbled rocks and the small pockets pitting nearly every vertical surface, I had to admit. The country provides perfect cover, from the chasms around us, to the jutting spires in the distance marking the Needles district of the park, to the labyrinthine slot canyons in the Maze district and to the west just past the meandering Green River. 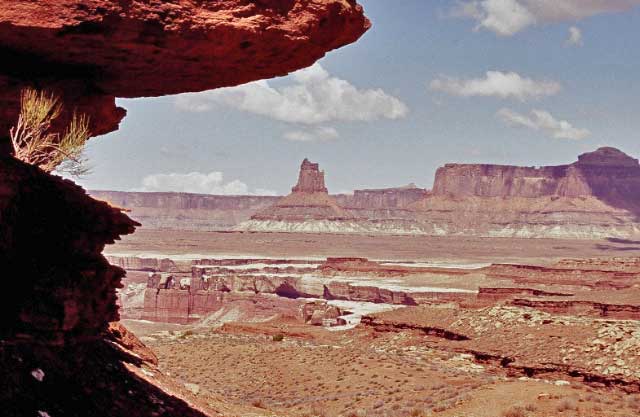 A view of the landscape along the White Rim Trail

Although we found no hidden treasure, my boys were captivated by the small pools left by recent rain. Such ephemeral pools, or potholes are unique, tiny ecosystems where life has a short window of time available for reproduction when briefly damp with rainwater. Each afternoon as we set up camp, they watched for ants and lizards, envisioned tiny life in the potholes, and explored the tent. (Note: One should never walk through the potholes when wet or dry. “Pothole organisms are sensitive to sudden water chemistry changes, temperature changes, sediment input, being stepped on, and being splashed out onto dry land.” NPS) 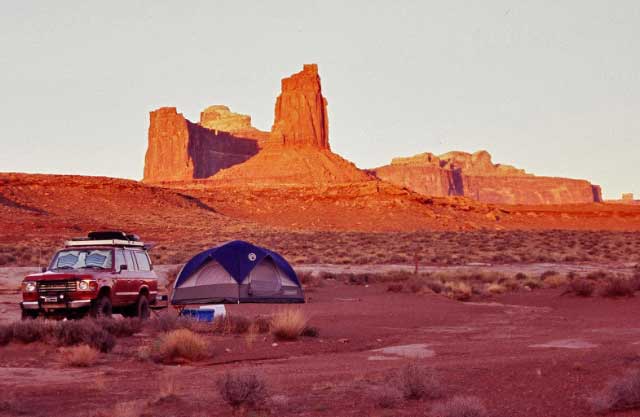 The ten campsites were bare-bones: just flat spots to ensure level sleeping and surprisingly clean vault toilets. Some sites, such as Taylor Canyon - where we spent our last night - are fairly isolated. Others are clustered three or four together.

Every designated camp within the park, however, provides a striking panorama of rust-toned rocks. And each offers unimpeded views of the impressive night sky. Little light pollution interferes in this isolated area, so Canyonlands has some of the darkest skies in the country, with up to 15,000 stars visible. As dusk fell, we utilized the colored lenses in the boys' flashlights for a game of “Red Light, Green Light,” then sat quietly as the heavens filled with one distant spark after another. Occasional satellites speeding overhead were the only reminder of the fast-paced world we had escaped.

Another overlook off the White Rim Trail onto a canyon

On our last morning, we regretfully packed our vehicle. We turned our backs on the towering figures of Moses and Zeus that hold court in Taylor Canyon, and churned through the sandy wash toward the last leg of the trail. Our silence was deeper now. It was time to go, but the backcountry still beckoned with its promise of peace.

As the tasks awaiting me at home began to invade my mind, I firmly ignored them. I had learned something from this alien land whose red dirt was now in my blood: there is sanctuary and strength in stillness. I had to leave the canyon country behind, but the serenity that infuses the land's stalwart guardians is mine to keep.

If you go:
Reservations for backcountry four-wheel-drive camping open in July for the following year, and may be made no later than two weeks before the starting date of your trip. A limited number of permits may also be available at the Canyonlands National Park visitor's center on a first-come, first-served basis.