Zip Code 92268 – Pioneertown California sits at just over 4,000 feet in elevation on the edge of the Mojave Desert, at the base of the San Bernardino Mountains where Joshua trees meet pinyon pine, manzanita and juniper.  Black bear, deer, bighorn sheep, coyote, fox and desert tortoises all intermingle in this area.  I’ve seen most of these; I’ve even seen a few wild burros many years ago there. Pioneertown was originally started in the 1940s as a movie set; it was built so that the buildings were real, not just fake movie fronts. People could actually live in the buildings – it had the dual purpose of housing the actors and the film crew behind the sets.

Since it was only a few hours from Hollywood it was an ideal location to film western movies and television shows.  Many of the Gene Autry television productions were shot at the site.  Other notable television shows that were filmed here are Cisco Kid and Judge Roy Bean.  Some of the original investors in the town were Roy Rogers, who also built the Pioneer Bowl, called Sons of the Pioneers, which the town was named after; Dick Curtis, who was a professional villian in old movies; Bud Abbott; and Russell Hayden, who played Lucky on the Hopalong Cassidy series.  Roy Rogers himself rolled out the first ball at the Pioneer Bowl in 1949. School-age children were hired as pinsetters until the installation of automatic pinsetting equipment in the 1950s. It’s considered by some to be one of the oldest bowling alleys in continuous use in California, though in recent years it’s difficult to find it open out there.  There are many places to stay the night but two of them really stand out. One I’ll discuss later, the other is the Pioneertown Motel, originally built to house the movie crews. It’s now a real motel right on Mane Street (yes, that’s the correct spelling: Mane not Main).

Here’s a list of many, but not all of the films and tv series that were made in and near to Pioneertown:

After the filming boom of Pioneertown slowed down many of the buildings were sold to outside parties as permanent or vacation residences.  Even though the heyday of filming westerns has wound down, Pioneertown is still used for dozens if not hundreds of music videos, television commercials and still occasionally, movies.  Its post office is reported to have the distinction of being one of the most photographed post offices in the nation.  To retain the Old West flavor and spirit of Pioneertown, the re-enactment groups Gunfighter’s For Hire and Mane Street Stampede perform a variety of shoot-em-up skits on Mane Street every Saturday and Sunday. 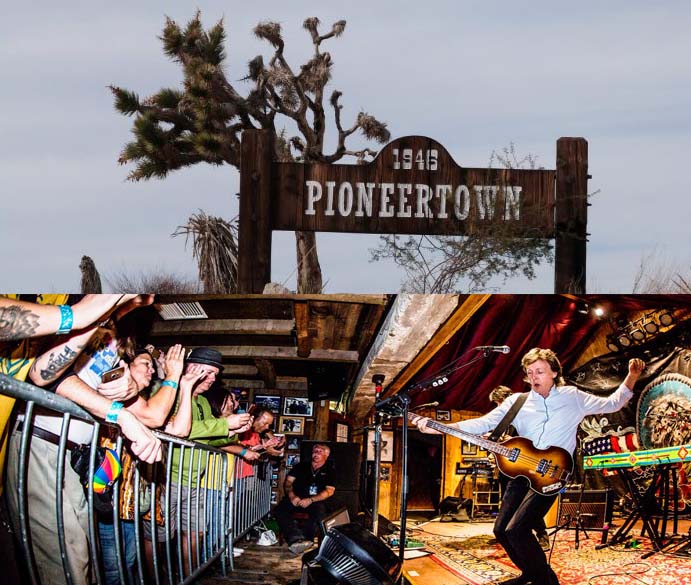 With all this said, what is the most popular aspect of Pioneertown today?

I guess you could say that Pioneertown is a faux western town but in the 60-plus years since it was built it has earned its own historical status. In 1946, where Pappy & Harriet’s stands today, was a facade used as a cantina.  In 1972, Harriet’s mother, Francis Aleba, and her husband, John, purchased the building and opened “The Cantina”, an outlaw biker burrito bar. The Cantina rollicked for ten years.  My first visit there was in the late 1970s and I remember it being a rowdy biker bar. It was a place I only visited a few times.  When it closed, they made sure the building stayed in the family. In 1982, Harriet and her husband, Claude “Pappy” Allen, opened “Pappy & Harriet’s Pioneertown Palace”.  While the bikers still hung around, Pappy & Harriet’s presence created more of a family atmosphere.  With family style Tex-Mex cuisine and live music featuring Pappy, Harriet and their granddaughter Kristina, Pappy’s quickly became a local favorite with all walks of life getting along under one roof! Pappy died in 1994 and his friends and fans flew in from all over the world to be at Pappy’s for a celebration of his life.  I began frequenting Pappy’s more often about this time and was amazed how so many people from different walks of life all gathered here.  I would see bikers, cowboys, off road bikers in full riding gear, rock climbers from nearby Joshua Tree National Park, hippies, and families with kids.  Harriet and her granddaughter Kristina would often take the stage to the delight of the audience.

Harriet sold the bar to a family friend who changed the atmosphere of the place, removing the pool tables and the pictures and making some unfortunate changes to the menu; he gave it up after a few failing years.  Then Robyn Celia and Linda Krantz, two New Yorkers who loved Pappy’s wanted to see it returned to its glory days.  The girls bought the club in 2003 and have done an incredible job. The legendary bar has become an indie rock favorite with a vibe that can’t be matched.  Busloads of tourists stop by on many weekdays.  When I eat there and watch a show, usually on a weekend, a few locals are always present. I ask other people seated around me where they’re from and I get responses from all over: Malibu, Burbank, Los Angeles, Beverly Hills, Orange County, San Diego and Palm Springs… the list goes on and on.

When you walk in the door you feel the history.  Some of my favorite acts that I’ve seen at Pappy’s are Sean Lennon, the son of Beatle John Lennon, Eric Burdon of The Animals (also a long time resident of the area), Kenny Loggins with his band The Blue Sky Riders and one of my regular favorites, Gram Rabbit along with many other bands from around the world.  People that have been seen performing or frequenting Pappy’s are Robert Plant of Led Zeppelin, Leon Russell, Bonnie Raitt, Victoria Williams, Dick Dale, Martha & Rufus Wainwright, Pistol Annies, Lucinda Williams, Rickie Lee Jones, Mick Taylor, Josh Homme (Queens of the Stoneage), Counting Crows, and Cracker and Shelby Lynne.  Famous people spotted enjoying the atmosphere include Cindy Williams, Helen Mirren, Anthony Bourdain, and Geri Jewell.

My wife and I and a friend showed up one afternoon for a meal at Pappy’s and Anthony Bourdain was sitting at the bar with Josh Homme.  I had no idea who either one was but I ended up taking a picture with Mr. Bourdain after I heard that he was filming a television episode and found out he was a famous chef adventurer.  Another time we ate dinner; it was crowded and half of our party left. Pappy’s asked if we minded if they sat another party at the other half of our table and of course we said yes.  The fellow sitting across from me looked familiar but I wasn’t sure if it was a local person I faintly recognized or a celebrity.  I finally realized it was Eric Szmanda who plays Greg Sanders on CSI Las Vegas.

October 13, 2016, the day I will never forget and will regret forever.  It was announced that Paul McCartney would be playing at Pappy and Harriet’s.  I thought it was fake news but alas, it was real.  First come, first served for only 300 people indoors.  I went to a work meeting and by the time I got there at 3:00 pm, sold out.  There was a car line a mile long on both sides of the road.  Well I got to see the pictures and videos, but every time I go there now I can almost see Paul on the stage, here is the news link:

Besides great entertainment their food is incredible, with many of the old time favorites back on the menu.  My favorites usually involve their chili, chili nachos, chili fries or a chili dog.  The pork chops and steaks are great too.  Pappy’s also offers a small house for rent right on Mane Street right behind the building.  Room rates vary from the low to high 100’s based on the date. There’s a bed, a fold-out couch and a kitchen.  After a long night at Pappy’s you can walk just a few hundred feet to your own private bungalow.

If you choose to continue your trip into the mountains all you have to do is drive a few more miles to Burns Canyon Road, National Forest Service road designation 2N02.  It’s a minimally maintained dirt road that goes all the way to Big Bear, about a 20 mile drive on dirt. A 4-wheel drive vehicle is recommended. In 2006 the Sawtooth Fire, caused by lightning, burned 61,700 acres, nearly 100 square miles of Mojave Desert and the nearby mountains.  It destroyed 50 homes, 8 mobile homes, 13 garages, 171 outbuildings, 191 cars and pick-up trucks, 27 trailers, 2 railcars, and 9 tractors. Twelve residences were damaged. It nearly burnt downtown Pioneertown to the ground.  There were 17 minor injuries and 1 civilian fatality.  The surrounding area burnt for miles around. You’ll see many burnt pine trees and Joshua trees along your route but fortunately recovery is happening, slowly but surely.

If you live within 200 miles of this gem of the Mojave Desert you have no excuse for not visiting “Pioneertown – 92268”.

Here are a few links you might like and please enjoy the pictures at the bottom of this blog:

Roy Rogers Throwing the First Ball at the Pioneer Bowl

A Mural Inside the Pioneer Bowl

Plaque Outside the Pioneer Bowl

The Same Spot as the Previous Picture Today

The Scarlet Lady (where Judge Roy Bean was Filmed)

The Road to Pioneertown

Looking Back to Yucca Valley

The Back of the Old Soundstage

The Back of tThe Old Soundstage

The Back of tThe Old Soundstage

The Hills Behind the OK Corral

Pappy and Harriet in the Heyday

Robyn Celia and Linda Krantz with My Friend Ben and I

My Friend Ben, Anthony Bourdain, Me and my Wife Kerry

Actress Geri Jewell and Her Partner with Our Group

Kenny Loggins and his Band The Blue Sky Riders

One Of My Family Gatherings at Pappy’s

Another One Of My Family Gatherings at Pappy’s

Having Fun With A Photo at Pappy’s with my Wife Kerry and Friends Ben, Brian and Jen