A passion for the rails

I have been photographing trains, I think, forever. I remember taking a snapshot, with my dad’s old camera, of a big black train tearing by while I was still in high school.

There is this adrenaline rush, a natural high as the train passes; horns screaming, crossing bells going off, the ground rumbling. Did you know you can stand at a crossing and scream as loud as you can, and you can’t hear it over the engine noise?

It is a very primal feeling.

After the engines pass, I am amazed how quiet the rest of the train is. Welded ribbon rail has eliminated many track joints and the train wheels just smooth on by, the familiar clickety-clack almost gone.

On downhill stretches of track, where there are no crossings, sometimes even the engines barely whisper by.

Rail fans watch a container train roll by near a crossing in Caliente, Calif.

Photographers are a particularly passionate group of people. Some folks like to photograph wildlife. Others prefer landscapes or wildflowers.

And then there is this bunch that are totally nuts about photographing trains: Big trains, little trains, bells and whistles, axles and wheels.

You can never travel too far to chase a steam train, hoping to be in position for a memorable photo. Across the state or across the nation, it doesn’t matter.

The last time a steam locomotive came through Barstow, Calif., we had visitors from all over the U.S. congregating by the old Santa Fe depot. They lined up to check out the inside and outside of the engine. Every little bit of maintenance was scrutinized by a dozen railfans. It was an excellent opportunity to photograph railroad men taking care of the locomotive. 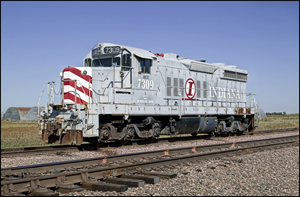 Photo courtesy of Grumpy’s World This is an EMD SD-18 locomotive roster shot with reporting marks indicating ownership by the Indiana Boxcar Corporation, and presently in service at the United Farmers Coop in Tamora, NE. It was originally purchased new by the Chesapeake & Ohio Railroad where it was number 1809. This photo was taken on October 4, 2003.

Rail photography runs the gamut from roster and wedgie shots to images that try to capture the unique beauty, soul and power of trains and their environment.

“What is a roster shot?” you ask? “And what the heck is a wedgie?” No, not that. We’re talkin’ rail photography here.

I can’t describe a roster shot better than the “Grumpy’s World” Web site: “The main idea [of a roster shot] is to portray the locomotive in a very realistic and straightforward manner; a builder’s pose, if you will. Leave your artistic ambitions at home when you go to shoot rosters; there isn’t any room for interpretation here.”

The typical lens for beginning rail photographers is the 50mm. Think of the roster shot as a boring school picture. All the details of the object or person are there, but in an unimaginative setting.

Just as there is a place in the family album for a school picture, there is a place for roster photos. They create a visual history of a locomotive or railroad. We never know when a railway company will be merged with another or bought out by a competitor, creating a “fallen flag” — North American-based railroader and railfan terminology referring to a railroad company no longer in existence due to bankruptcy or merger.

There is a whole sub-genre of train photography dedicated to nothing but roster images. “Just as some people like to collect coins or stamps, some people endeavor to collect and catalog images of trains,” said railroad photographer A.J. Smith. “For example, one person might aspire to collect at least one roster shot of every locomotive in the BNSF fleet, from both the left and right sides … or every former Western Pacific passenger car … the specifics are limitless.”

Practicing with a 50mm on roster-type photos is a good way to learn how to see the potential of rail photography and what you find personally fascinating. After you have mastered the basics, you can move on to more challenging assignments.

Dramatic clouds and a low angle add some interest to this wedgie shot of a Union Pacific Railway train sitting outside of Nipton, Calif. in the far Eastern Mojave Desert.

A wedgie is more or less a 3/4-angle shot of a train coming toward the photographer with the cars stretching behind, creating the perfect wedge shape — preferably evenly lit from the broad or front side.

The wedgie is a step up from the roster photo as it allows for a little bit more creativity. The scenery comes into play as does the weather. Billowing clouds or a spectacular sunset can add a dramatic element to the standard wedgie, which can be a bit of a cliché. 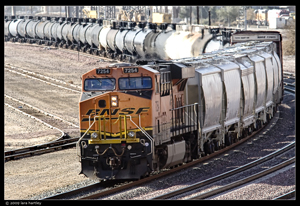 A 300mm lens with a 1.4 converter was used to create this image. Note how compressed the engine and rail cars look.

Shooting trains is like any other photo subject — show me something new. If you have multiple lenses, try different ones to see how different focal lengths affect the image. Because trains are a lengthy line of objects, long lenses can compress the objects, making them look shorter and closer together. 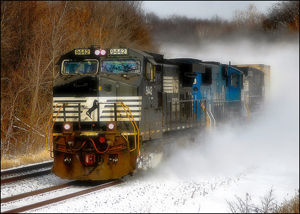 Photo courtesy of A.J. Smith A fast-moving westbound intermodal train, hauling truck trailers from the East Coast to the Midwest, blasts through freshly-fallen snow in Western Pennsylvania. This was photographed with Smith’s 70-300mm lens.

A wide-angle lens has the opposite effect. Objects are more distorted — those closest to the camera look bigger, those farther away much smaller, elongating the line as in the wedgie shot above. Each lens has a place in your railroad photography arsenal.

Smith likes using his 70-300mm but occasionally wishes he had a shorter lens on his camera.

If you are trying slow speed or night photography, you have to use a tripod and a cable release. 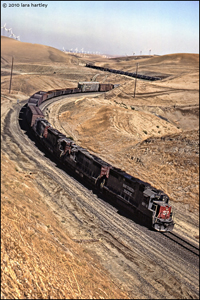 In 1986, a Southern Pacific train eases down a long “Ess” curve on the now abandoned right-of-way over Central California’s Altamont Pass. Union Pacific bought the historic SP several years ago and it is now one of the many “fallen flags” in railroad history. The Altamont Pass Wind Farm, seen in the background, is a one of the earliest wind farms in the United States. 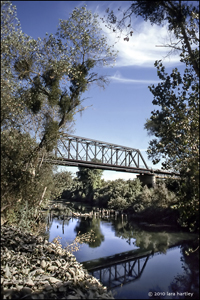 This rail bridge provides an unusual backdrop for photographing a train as it crosses the Stanislaus River at Riverbank, Calif. Unfortunately, one did not show up while I was waiting — and waiting.

The pioneer and master of railroad photography, Richard Steinheimer, appreciated the aesthetics of trains and loved to photograph all types of locomotives — at night, in bad weather and perched in precarious positions. He has been called the “Ansel Adams” of railroad photography. He especially loved to photograph the Southern Pacific as it crossed over Donner Pass in the Sierra Nevada Mountains. Steinheimer’s wife, Shirley Burman —  a fine rail photographer in her own right — is also a railroad historian. They made a great team.

Smith said, “I believe, for most train photographers, photography is merely one manifestation or expression …[of] a deep-rooted, lifelong passion for trains. The passion for rail comes first, the camera second. For most us, we have this desire to capture and share the thrill of that fleeting, exciting few moments of a train’s passing. Each photo opportunity is absolutely unique.

“You could take a thousand photos of passing trains from the same spot and each would be different in its own way: The train consist, the weather, the lighting, etc.”

The owner of Grumpy’s World said, “When I think about enjoying train photography, it seems to me there is something fundamentally different about it than with other types of photography and that has to do with ‘the game.’

“What I mean is, the way I approach this goes way beyond photography. There’s a lot of intelligence gathering involved — figuring out where the trains are and where they will be. I do this by listening to the radio (i.e. scanner). Then there’s all the driving involved to be at the right place at the right time. And of course there is always the weather to contend with.

“The type of shooting I do is actually pretty difficult. It requires a lot of thinking, which is probably why it appeals to me. The actual photography itself really doesn’t amount to much — it’s everything that goes into to being able to shoot the photo that is challenging.”

There is a train sitting on the tracks near my house today, with six engines shining orange wet on this dreary, rainy afternoon. Lashed together just waiting to leave town, they are hissing and snorting and the analogy to “iron horse” seems especially apropos. You know someone has to really love trains to live near the tracks and rail yard.  (lh Feb. 9, 2010)

We would be remiss if we didn’t mention safety and trespassing. The National Railway Historical Society has boiled it down to a few salient points:

[Be aware of your rights as a photographer, but in the field may not be the best time to argue the law. www.krages.com/ThePhotographersRight.pdf]

A.J. Smith and https://blog.grumpysworld.com/ contributed to this story.

“Neither a wise man nor a brave man lies down on the tracks of history to wait for the train of the future to run over him.”
~Dwight D. Eisenhower~

Take a look at Lara’s article on The Beep: Beep is a contraction of Baldwin Geep, but it was officially named an SWBLW, which stood for SWitcher Baldwin Locomotive Works, said Lawrence Dale, president of WARM.