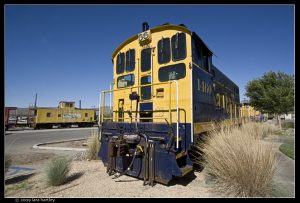 PARKED IN BARSTOW: Santa Fe locomotive 1460 has found a final home in Barstow at the Western America Railroad Museum.

It was the little engine that could — and did — for 66 years. And 38 years after it was rebuilt in Santa Fe Railway’s Cleburne, Texas, shop, BNSF 1460 officially retired in December 2008.

Rail fans affectionately call the little locomotive the “Beep,” and it has found a new home at the Western America Railroad Museum, or WARM, in Barstow.

Beep is a contraction of Baldwin Geep, but it was officially named an SWBLW, which stood for SWitcher Baldwin Locomotive Works, said Lawrence Dale, president of WARM.

In an experiment of repurposing locomotives, the Beep was the solitary example of a Santa Fe repowered Baldwin switcher unit, using General Motors EMD engines.

It has a GP7-style long hood and upgraded trucks, which gave it more tractive power — a handy thing when switching out rail cars in the yard.

In layman’s language, the locomotive is a rebuilt amalgamation of unmatched parts added to a stripped-down Baldwin cab and frame. 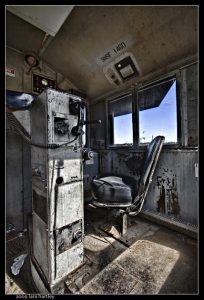 HAVE A SEAT: Visitors to WARM and the upcoming Rail & Craft Fest at the Harvey House will have the unique opportunity to climb aboard the ‘Beep’ and sit in the engineer’s seat, above, and get a first hand close-up view of the locomotives controls.

“The resulting locomotive performed as intended, but in the end, it was just too much work to modify the Baldwin frame to accept the EMD engine and road trucks,” said Even Werkema, on his comprehensive Web site, the Atchison Topeka & Santa Fe Railway Subjects at atsf.railfan.net/. “The economics didn’t work out and the prototype was doomed to be a one-off.”

I sat down with Lawrence Dale and asked him a few questions about the museum’s new acquisition.

Q. How do you feel about acquiring this locomotive?
A. I am real happy about this; it gives us a piece of history of the Santa Fe that is one-of-a-kind.

Q. What was the process like to get the Beep?
A. When I found out they had tied this locomotive up at Topeka, Kan. (taking it out of service) I contacted Chris Roberts, the vice president of the Mechanical and Value Engineering Department in February about donating the unit to WARM. On March 25, Roberts called me and told me the donation had been approved.

We had to get all the formal papers completed and go through the manager of Asset Disposition, who handles all the donations and sales of equipment and materials off the BNSF Railway. 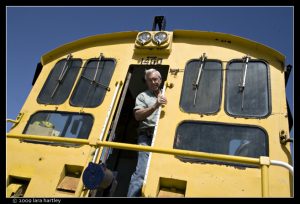 Q. How did 1460 get to Barstow?
A. It was shipped here from Topeka by rail as one of the units-in-consist (a group of locomotives) at the head end of a regular freight train.

BNSF switch engine No. 109 brought it down, set it at the other end of the yellow Union Pacific caboose. They pulled all the other equipment off the storage track near the museum and shoved the little engine home. The rest then had to be put back and securely tied down.

Q. What do you want to do with it?
A. Well, a lot of rail buffs around the county are interested in it, so it will be on display at the museum and in time for the Barstow Rail & Craft Fest in October. We had people down here looking for it before it was even moved into place.

Q. Is it running?
A. Yes, it is a running engine. It went out of service for electrical problems — nothing to keep us from making it run.

Q. Why is it important to have it running?
A. It is more value to the museum to have a running locomotive. We’ll start it once in a while to keep it operable. We will have it running well by the Railfest — if we put water and fuel in it, it would run now. To prevent vandalism, there will be a security camera focused on it.

Visitors to October’s event will be able to climb in the cab to sit in the engineer’s seat, and the doors to the engine compartments will be open so rail buffs can look inside. 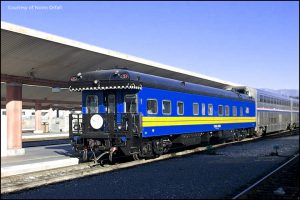 The Pacific Railroad society and LA Rail, Inc., will operate a special train from Los Angeles to Barstow on Oct. 17 in conjunction with Barstow’s RAILFEST 2009 celebration. The train will leave Los Angeles Union station at 8 a.m. Oct. 17 and will stop for passengers at Fullerton’s Amtrak station at 8:40 a.m. The train will climb 3,600 feet to the top of Cajon Pass and passengers aboard will see the recently constructed third main track through the pass. The train is scheduled to arrive at Barstow at 12:30 p.m. Passengers from the train will receive a lunch on arrival and have the afternoon open to explore the Harvey House and museums as they wish.

The train will depart Barstow at 3:30 p.m. that day for the return trip to Los Angeles. 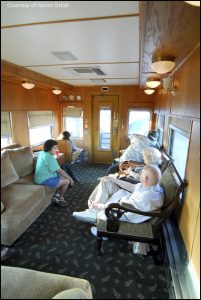 For more information and reservations (reservations are required) on this train, call 953-9620 or see www.RideMyTrain.com or www.LARail.com.

Railfest will include craft and hobby vendors, model railroad modular displays from the National Model Railroad Association, tours of the Harvey House and free admission to Western America Rail Museum and the Route 66 Museum in the Harvey House.
Breakfast and lunch will be served by WARM museum volunteers in the park-like areas around the Harvey House. A sandcastle building contest sponsored by Barstow’s Chamber of Commerce will be held nearby in the Mojave River bed.

Take a look at Lara’s article on photographing trains: A Passion for the Rails.