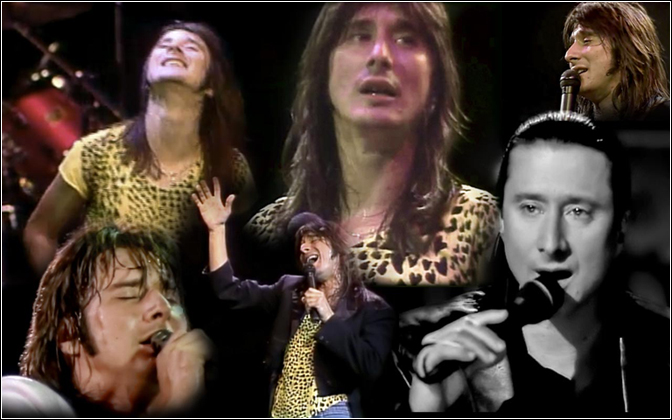 Steve Perry was nicknamed “The Voice” by Bon Jovi back in 1989. The moniker has stuck for more than 20 years and for good reason.

I have my own thoughts about what makes Steve Perry, the former lead singer of Journey, special. No, it’s not the tight jeans nor the fabulous long hair, while those certainly do count.

A complete analysis of “The Voice” was done by Ross Muir on his FabricationsHQ Web site, so I am not going to try to match that ebook ‘argument paper’. (https://www.fabricationshq.com/one-in-a-million—a-vocal-analysis-of-the-voice.html)

But I have listened to a few different singers doing one of the ’80s great power ballads “Open Arms,” and a couple of things make it really clear why Steve Perry is just so darn good.

It is his lyrical phrasing and control of vibrato.

On Perry’s step-down notes of “believe_what_I_say,” in “Open Arms,” he uses a controlled vibrato on each word, each step. He employs the technique several times in that piece. (https://tinyurl.com/2bnhoqp)

Many other performers just sing the song “flat.” Not out-of-tune flat, but rather with no emotion, no nice vibrato. Each word is the same, with very little inflection. And let’s not forget the vocal ad libs Perry uses to such great effect in his solo work and classic Journey releases, such as the powerful anthem “Mother, Father.”

If those other vocalists are not singing blah, they are shouting, trying for emotion — it is “look at me, I am singing loud so believe what I say.”

It’s hard to explain but many of the old Journey songs affect me on a visceral level.

The aforementioned “Open Arms”  — and within “Still They Ride,” I find one of the finest emotional phrases in any Journey tune.

The song is a short-story masterpiece recorded live at the 1983 Budokan concert in Japan. Another deft writer, the woman behind (www.chosenmadness.com) turned me onto this youtube video and I will be forever grateful. (https://tinyurl.com/2crsru2)

The phrase “ridin’ slow-oo-oh” — man oh man. Jesse is movin’ slow through a town that doesn’t know him any more and Perry’s phrasing in that song conveys all the feelings of the restless rebel. Sublime moments, perfect phrasing. I just hit repeat on the ol’ iPod and head out on the highway looking for my own Jesse.

Now here is what I think about some of the over-the-top female fan stuff.

If you’ve read any of the posts on the (unofficial) Steve Perry Facebook fan page you’ll notice a strong trend toward the thinking that Steve Perry must be a fabulous, warm, sweet and caring guy who loves everybody and adores his fans as much as they adore him. And poor Stevie, life has been so cruel, father leaving, mother dying, former band dudes being dicks.

I have tried to interject some reason into the mix, but I am usually shot down in flames because I dare to say, “We don’t know him, the man he is now.”

Because Perry sings with such unadulterated emotions, he must be the guy in the music. In “What Was” we feel his pain as if it were our own.

If someone can sing about those feelings so well, words and phrases that touch our hearts, then he must be above the petty jealousies and foibles that plague the rest of us mere mortals.

He very well may be, but hey, we don’t know since we are not personally acquainted with the man.

Here is my other thought about why “The Voice” so appeals to us — it’s all about sex.

Perry’s high voice suggests innocence. On the 1981 Houston “Escape” concert DVD, his joy at performing is palpable. He looks like a boy/kid having a blast on stage and wearing his heart on his sleeve.

Just like the perfect (pre-zits and shaving) boy we had a crush on when we were 13-14 years old.

The boy didn’t really notice us but we knew if he would just look our way, love would burst forth and we would walk hand-in-hand to the sophomore dance in perfect non-sexual bliss.

Gene Pitney, Roy Orbison, and Del Shannon  —  all were soaring tenors that affected us in the same way. Early Frank Sinatra too, for a different generation — tapping into as yet, unknown sexual territory.

What the heck did we know about sex anyway. Just the juicy parts of Peyton Place, and we didn’t understand those very well at all.

Deeper voices can be more threatening. Think of the bass singer in an opera. Usually the bad guy. And sometimes the baritone too — bad guy.

The dichotomy of lower register voices means baritones can also remind us of husbands, fathers, brothers — safe, comforting. Analyzing baritones can be tricky.

But oh, the tenor — he is the guy in the white hat singing of unrequited or broken love. Our hero.

High-pitched voices are pure; singing love songs that promise something more than sex.

I think that is why they pushed Josh Groban in his early work — a baritone by the way— to sing in his higher range, reaching for that tenor purity, appealing to young teenage girls and old teenage women.

Then we have Elvis the Pelvis. Boy, did he open up a can of worms. Not only the lower sexual voice, but lower body movements we just knew were dirty.

Women like to remember when they were girls, asexual beings with unrecognized longings.

That’s where Steve Perry comes in — that counter tenor voice reminding us of our girlhood.

Some lady fans don’t acknowledge Steve Perry’s later public crudeness. Maybe they never heard him sing in a recorded live performance, the guttural beginning to “Lovin’, Touchin’, Squeezin’” that talks about, well, I ain’t gonna say the words. And for sure, many of those fans haven’t heard “Can’t Stop” or can’t acknowledge it is totally sex on wheels.

I used to think, “Thank God Mr. Perry isn’t into that whole crotch-grabbing thing made popular by Michael Jackson.” But you can see Perry did exactly that in an video shot from the audience during the “For the Love of Strange Medicine” tour. Holy crap. Talk about my mental illusions being shattered. Where was the innocent boy? And what was he doing grabbing at his crotch? For crying out loud he was too old for that sh*t.

Myth of the Bagdad Cafe Lives On