A touch of class

Fall is fast approaching and Barstow’s Western America Railroad Museum — WARM — is gearing up for their annual Railfest on Oct. 16th & 17th. This year there is a special addition to the museum’s collection of rail cars. A BIG addition.

WARM recently acquired a vintage business car from the Arizona & California Railroad in Parker, Ariz. and museum president Lawrence Dale and I had a nice chat about WARM’s newest acquisition. 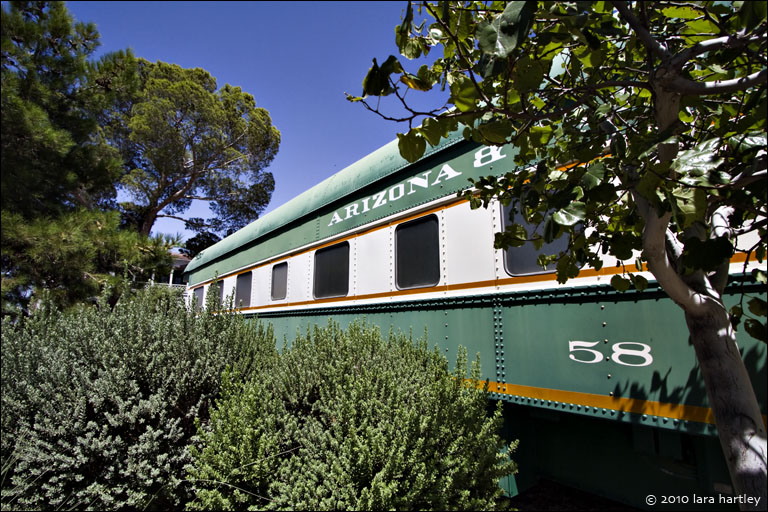 The old Santa Fe business car #58 seems right at home at the former SF Harvey House Depot in Barstow. The car was originally painted to look like stainless steel but is now wearing colours of the Arizona & California Railroad. Lawrence Dale, who was instrumental in obtaining the car for WARM, has a history with this car having stayed in it back in 1978 while it was still in Kansas City.

What is the new addition to the museum? A retired Santa Fe business car used originally on the Coast Line as #38, later renumbered #58, has been added to WARM. In the 1990s the car was used by Coast Line General Manager Dal Fish. 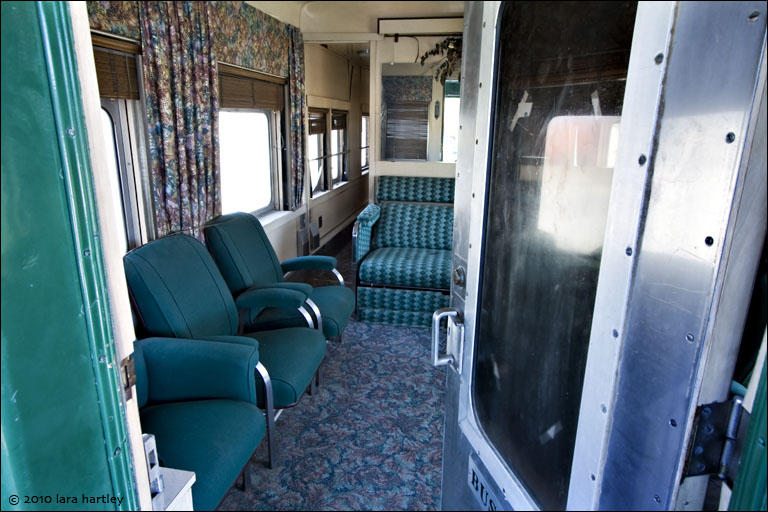 Vintage furnishings still grace the vestibule of the business car.

Where did it come from? Originally from Santa Fe, the vintage passenger car was sold to the Arizona & California Railroad in Parker, Ariz. in 1998.

The business car was built in 1925, under Pullman order #4883 — which shows specifications and drawings for a heavyweight business car identified as #38.

What is a business car used for? It was normally used by the General Manager when making a trip across his territory to see how things were going, track conditions and safety issues. It was used as a rolling office.

The GM would also take customers across the railroad — courting new clients or improving business relationships with current clients. The GM would also have safety meetings with the various department heads. 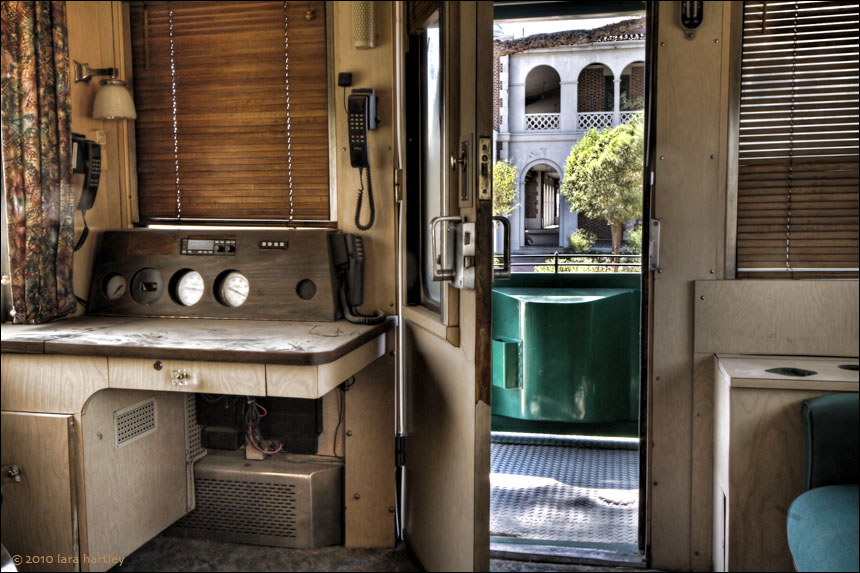 Looking out from the vestibule is a stellar view of the Harvey House. To the left is an operating console where the General Manager or other railroad officials could monitor the train's progress.

What is a General Manager? On the Coast Line the General Manager is responsible for everything that pertains to the operation of the railroad other than the locomotive shops in Barstow. 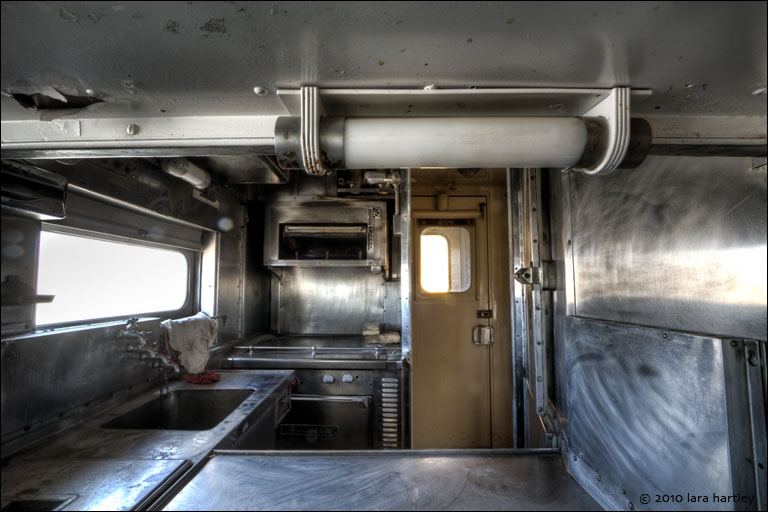 The stainless steel galley still has many of the original fixtures and is the model of efficiency.

Why did WARM acquire the car? “We felt it was important to acquire the business car and restore an important part of Santa Fe history, as a preponderance of our members are Santa Fe/BNSF or ex-Santa Fe/BNSF employees,” Dale said, adding, “The museum attracts more than just ex-railroaders. Rail fans line up along the track, especially for special trains.” #58 is the only passenger car WARM has that is available for public viewing.

How was the purchase funded? The car’s purchase was made possible by previous Rail Fest fund-raising efforts and income from the gift shop. 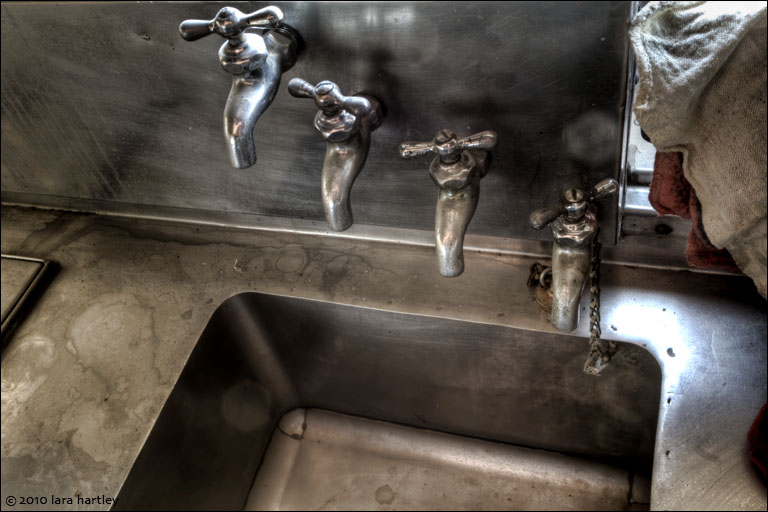 Even the galley faucets have that "old-time" look to them.

How did it get to WARM? Business car #58 was moved via freight train on Arizona & California track from Parker to the Cadiz siding in the Eastern Mojave Desert. The cost of that part of the move was donated by the A&C railroad.

What is Cadiz? Cadiz is the junction where Santa Fe’s Parker subdivision track left the main line in order to go to Parker, Ariz. Santa Fe sold the short line in 1991. (See sidebar)

At Cadiz, the BNSF Railway took over the operation and moved the business car to Barstow.

The car left Parker, Ariz. on the morning of June 19th and was in place in Barstow, Calif. in the late afternoon of June 21st, said Dale. 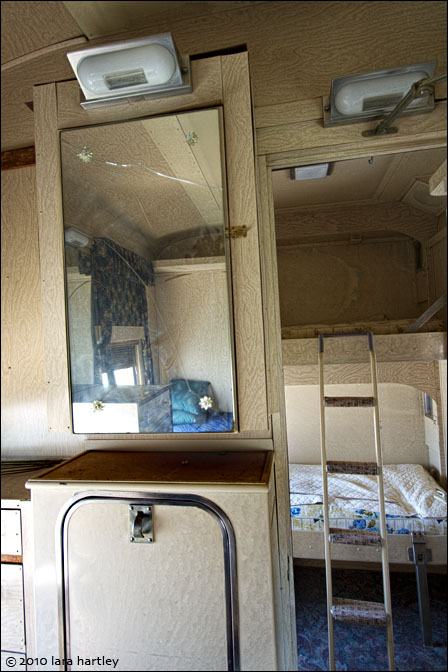 Through a connecting doorway from the master bedroom, which has a full-size bed, you can see one of the pull-down bunk beds and a ladder for easy access. These rooms also have many of their original fixtures which add a touch of class to the venerable business car.

Moving the car was not without problems. Permission to move it was granted by BNSF but the Federal Railroad Administration had to do a brakes air test at Parker. There were air leaks so those had to be fixed before it could be moved. One spare part came from the Grand Canyon Railway and a service valve was provided by a private owner from Southern California.

Every car has to have operable brakes. Before being moved out of a terminal, air brakes have to be operating at 100%.

Rail car brakes are operated by air pressure running through a brake line throughout the entire train. Every car has its own line that connects to the rest of the train, and each car has its own valve and braking equipment.

What are WARM’s plans for #58? The group is going to sit down to decide what they are going to do with the interior. “We need to find out what is under the birch-looking vinyl wall covering,” Dale said. There is the possibility of returning it to original wood or we may have to put a veneer on it.” Dale’s choice would be vintage-looking mahogany.

Before Rail Fest the car will be spruced up so it will be presentable to the public. If there is loose vinyl, it will be taken off. The carpets and chairs will be cleaned.

The Arizona and California Railroad (reporting mark ARZC) is a short line railroad that was a subdivision of the Atchison, Topeka and Santa Fe Railway (ATSF). The ARZC began operations on May 9, 1991, when David Parkinson of the ParkSierra RailGroup purchased the line from the Santa Fe Railway. ParkSierra RailGroup was purchased in January 2002 by RailAmerica, the current owner of the ARZC. ARZC’s main commodities are petroleum gas, steel and lumber; the railroad hauls around 12,000 carloads per year.
Source: Trains Magazine (Kalmbach Publishing), “RailAmerica’s Empire,” June 2010.

The large mirror in the vestibule end of the car hangs in place of  what used to be a big sand painting by artist Danny Akee. Unfortunately, it is long gone.

Dale said, “We also want to know what the original interior looked like.”

He estimates a full restoration would cost half a million dollars or more. “In addition to the cosmetic restoration, to put that car on the railroad, it needs a 40-year inspection (a car more than 40 years old requires an FRA inspection) to be certified by Amtrak.

“That would require an overhaul of the electoral system to 480 volts to be Amtrak compatible. A coupler needs replacing and the power plant — the diesel engine that runs a generator that provides power for the car independently — must be redone.”

Railfest will include craft and hobby vendors, model railroad modular displays from the National Model Railroad Association, tours of the Harvey House and free admission to Western America Rail Museum and the Route 66 Museum in the Harvey House.

Breakfast and lunch will be served by WARM museum volunteers in the park-like areas around the Harvey House.

For now the passenger car is looking pretty spiffy in her new home at the Western America Railroad Museum.

You might also be interested in reading about the BEEP – the little locomotive BNSF 1460 – acquired by WARM in 2009.