Driving along the I-10 on my way to and from the desert, I always pass an exit called “Whitewater.”  It’s located just outside of Palm Springs, CA and it never fails to catch my attention.   I find myself asking, what is Whitewater? Is it a small town or community?  Or is it a park? I noticed a year round river passing under a bridge near the exit, and that made me curious about the area and where the water comes from. You don’t often see naturally flowing streams and rivers in the desert.  Where did the river start and where did it end?  Whitewater was a series of questions waiting to be answered. 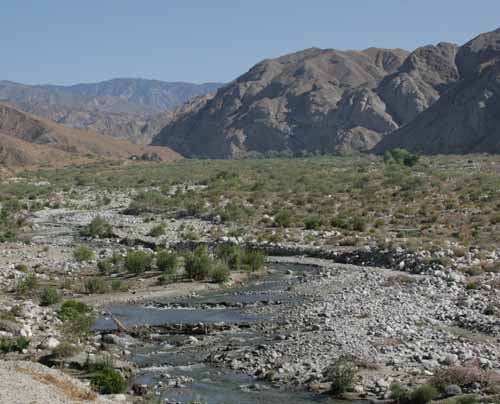 Views of the canyon and the river.

During my last trip along the I-10, I asked my boyfriend what it was.  Tony said there was a river with some stocked ponds, and a stream up in the canyon where he used to take his son fishing. It sounded like it would make an interesting trip, so I made a mental note to visit in the near future.

A month later, I found myself exploring the small community of Snow Creek with my friend Sue.  Snow Creek is just outside of Palm Springs, CA and it lies directly across the I-10 from Whitewater.    I suggested to Sue that we check it out after our visit to Snow Creek and she seemed up for it.

We took the Whitewater exit and headed north on Whitewater Canyon Rd., which took us on a five-mile journey through the canyon.  The signs indicated that Whitewater was a preserve. It was our first clue to what we would discover.  I was amazed at how green the canyon was, and how cool the temperatures were, especially since it was a week into July, one of the hottest months in Coachella Valley.   I almost had to put a jacket on that day, which seemed odd to me.  Shorts, flip-flops and a lightweight shirt are all we ever wear during the summer months, even at night.

The drive through the canyon revealed views of the river, and we stopped several times to take photos of the sparking water, and the nearby windmills perched on the hills and cliffs that flank the canyon.   After a few miles of driving we arrived at the Whitewater Visitor’s Center.  A ranger greeted us as we walked into the historic lodge, which now serves as the ranger station and visitor’s facility.  The ranger provided quite a bit of information about the preserve and the wildlife there.  It was interesting to learn that they had recently released four bears at the park.  There had also been recent mountain lion and bighorn sheep sightings by one of the other rangers. 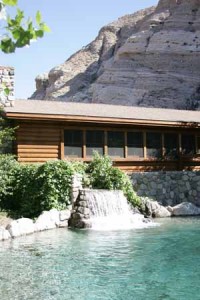 The Ranger Station and Visitor’s Facility.

The Whitewater Preserve consists of 2,851 acres that are part of the larger, 33,000 acre Sand to Snow Preserve System managed by the Wildlands Conservancy.   Out of the 2,851 acres, 241were previously owned by the Whitewater Trout Farm.  Since this acquisition, the Whitewater Preserve no longer offers fishing, but they do maintain several beautiful ponds where visitors can view and feed the fish.  Fish food is free and can be picked up at the visitor’s center.  If you can, be sure to leave a donation in one of the white envelopes located on the visitor’s center counter. They appreciate the support.

The Whitewater Preserve is a gateway into the San Gorgonio Wilderness.  The river that runs through the preserve year round is called the Whitewater River. It starts at the highest point in southern California on the southeastern slopes of Mt. San Gorgonio and it ends at the Salton Sea.  The river is fed by rainwater and melted snow.  It creates riparian habitat that is home to many different species of birds, including the endangered southwest Willow Flycatcher and the Bell’s Vireo.   It is a great location for bird watching no matter what time of year you go.  In the summer you may catch a glimpse of migrating birds such as Summer Tanagers and Vermillion Flycatchers.   As noted earlier, there are bear, bighorn sheep, mountain lions and deer that live on the Preserve lands.  You never know what type of wildlife you will view when you visit.

When Sue and I first drove into the canyon, we noticed many different types of trees growing along the river. Native sycamores, cottonwoods, ash, narrow-leaved willows and other native bushes and shrubs created a greenbelt along the river’s route.  Many of the trees and shrubs had grapevines growing around the bases and entwined in the lower branches.  The vines added to the already lush environment and emphasized the refreshing sounds of the nearby water.

The Whitewater Preserve offers some fun activities for families and nature enthusiasts.  Camping, wildlife viewing, outdoor education programs, guided nature walks and access to hiking trails are just a few of the possibilities.  There is a hiking trail that starts at the visitor’s center that reaches all the way to the Pacific Crest Trail.  The San Gorgonio Wilderness is about a ½ mile from the trailhead.  The Whitewater Preserve’s facilities include the visitor’s center and ranger station, and campsites and picnic areas.  Group camping is available by reservation.

The ranger said that the Preserve was full during the Fourth of July weekend with campers and hikers.  He suggested we come back with out hiking boots to explore the trails.  I plan to return this summer to do just that!

-From 1-10, take Whitewater exit
-Turn north
-Then turn left onto Whitewater Canyon Rd.
-Travel 5 miles
-The Preserve is at the end of the road

The sign that you will see once you exit at Whitewater from the I-10.

Windmills flank the Whitewater canyon on the drive into the Preserve.

The Whitewater river runs through the canyon.

Views of the canyon and the river.

The Ranger Station and Visistor’s Facility.

One of the stocked ponds at the Preserve.

Mallard ducks live in the ponds at Whitewater Preserve.

Desert Willow were in bloom in July.

Views from the canyon floor.