4WD Trip To The Storm Jade Mine
The third time is the charm!
By L. Bremner of DesertUSA.com 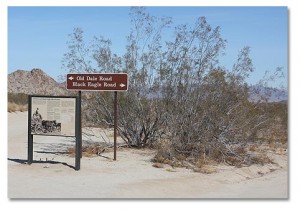 This trip has been a year in the making.  Last fall my dad (Jim) and I tried to get to the Barry Storm Jade Mine twice, but the Black Eagle Road was washed out about 5 or 6 miles in and it had a drop off that we were not sure we could navigate past.  Even if we got down the drop off how would we get up it?  With only one vehicle we didn’t want to risk it.

This year we planned a third attempt, but this time armed with two 4WD vehicles.  One of our site contributors, Lara Hartley, joined us on this excursion. A friend of ours joined us on the trip rounding out our group to a total of three.  He has been vying to find some lost treasure somewhere in the desert.   Maybe today would be his lucky day!

Jim had planned various strategies on how we could navigate the drop off during our third attempt.  He’s had a lot of time to plan this trip.  When we reached the wash crossing along Black Eagle Mine Rd. where the drop off was, Jim just stopped the car and stared.  The road had been fixed!  No more drop off in sight.  He was almost disappointed that we didn’t have the challenge of a treacherous hurdle, but relieved that there would be nothing stopping us this time from reaching the mine. 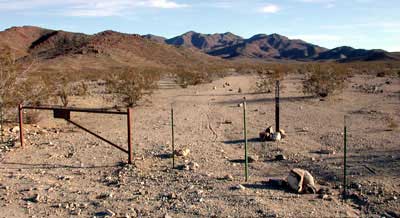 Trailhead to Storm Jade Mine.

Using a GPS device Jim tracked our progress and when the map indicated we were close we stopped at what looked like the old road that turns off to the right with a metal gate across part of it.  It was not a maintained road, so we couldn’t drive in.  We packed up our cameras, video equipment, some food and headed up the sandy wash on foot.  About a mile in we realized that we were not in the correct valley.  Even though the GPS said we were near the mine we couldn’t see any evidence of the mine nearby.  After a brief break for lunch we headed back to the cars.

We continued to drive further up the Black Eagle Mine Rd.  About less than 1/2 mile up the road we saw was another gate on the right side with a park stake/marker.  Dad said, “this is it for sure!”

Once again, we parked off of the road and packed up our equipment. With a hike already under our belt we were hoping this one would be a shorter trek.  About 5 minutes into the hike, we knew we were on the right path.  We saw some stakes to the left side of the valley, along the mountainside in the distance.  There were some pieces of low-grade jade scattered about along the route.  It was about 3/4 mile before we reached the Barry Storm jade mine site, maybe even a mile. 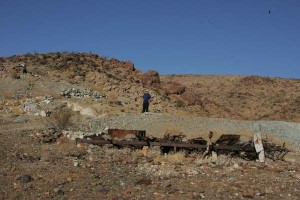 Looking up from the road towards the home site and mine with old trailer frame below.

The Storm Jade Mine was a mining claim once owned by Barry Storm.  He was well-known author and prospector.  The book that made his claim to fame was called Thunder Gods Gold (1945), a book about the Lost Dutchman Mine in the Superstition Mountains of Arizona.  His book was made into a movie called “Lust for Gold” by Columbia Pictures (1949) starring Glenn Ford.

In his later years Storm discovered the jade mine which now resides within the Joshua Tree National Park.  I believe it used to be BLM land.  Strom claimed that he found the location of the jade mine while hiking in the desert.  Storm said he saw several flying disc crafts that shined a beam of light on the mountain slope where he later staked a claim.  Storm’s account of the discovery includes him finding Mayan beads and an artifact at the mine location.  This accounts for Storm’s belief that the jade mine was where the Mayans had extracted jade for their jade masks.  This story sits on the shelf with his numerous accounts seeing flying discs and encounters with beings from other places. 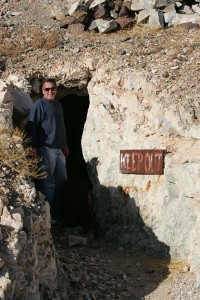 Tony at the entrance to the jade mine.

Individuals who knew Storm and who had spent time with him described Storm as being paranoid and eccentric.  How much of what Storm wrote about in his books and included in his stories was real and what was imagined or made up?  Hard to say, but what we do know is that Storm was a great storyteller and that he knew how to get people to believe his tales of flying discs, lost mines and Mayan artifacts.

As I approached the site of the Storm Jade mine, I recognized the shape of an old burned out trailer frame that was entangled with other rusty remnants of Storm’s past home site.  From what I read, the trailer came in after he lived in an 8-foot square, plywood cabin for some time.   He had lived out at the mine for about 10 years.  While I stood there looking over the area I wondered how in the heck he did it.  How did he survive out there in the desert without running water, electricity or any water source nearby?  He obviously had a septic tank in his cabin as the hookups are intact and visible in the shacks cement foundation.  How did it work if there was no running water?  Was there an old well or did he truck water in and fill a water tank up? I left with more questions than I had before this trip. 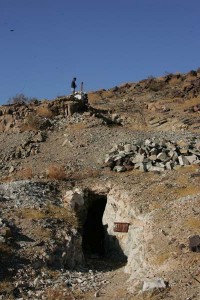 The mine in the foreground with the claim stake and silver rock pile in far distance.

The cement foundation of Storm’s old shack lies just above the trailer site.  And beyond that is the entrance to the jade mine.  There is a rusty “Keep Out” sign still hanging near the door.  The door had previously been pried open and we were able to walk into the mine tunnel that was more than 50 feet deep.  It is very dark inside the mine, almost pitch black, so we used head lamps to find our way.  Near the end of the mineshaft there is a hole in the ceiling that allowed some light to shine inside the shaft.  This same hole can be seen on the outside of the mine near a storage room where Storm stored his explosives.  This storage area contains another door set above and back from the mine entrance.  You have to walk up the mountain a bit to see it.

I turned and looked down at the valley below.  It was a peaceful place. Storm has his own private desert retreat here. He actively mined and lived at the site during the 1960’s up to the time of his death in 1971. Surprisingly he had many visitors come to the mine during the years he lived there. Storm would charge casual rockhounds and prospectors a fee to collect jade at the mine site.  The jade coming out of the mine had been low grade, so it wasn’t a big strike and it didn’t create a lot of wealth for Storm.

Raw jade blends in with the desert landscape. This piece of jade is orange/brown on the outside, but the chip reveals the green jade inside.

Why did Storm choose to live out in the middle of the desert?  The jade mine production didn’t really justify the sacrifices he made to live away from society and the luxuries of city living for so many years.  Some might speculate that he was hiding from unseen enemies or threats.  The type of enemies that existed only in his own mind colored to life by his creative imagination.

The Barry Storm Jade Mine is located off of the Black Eagle Mine Rd.  The Black Eagle Mine Road is approximately 6.5 miles north of the Cottonwood Visitor’s Center in the south portion of the Joshua Tree National Park.  Take the Black Eagle Mine Rd. for about 8 or 9 miles.  To the right of the road you will see an old metal gate and some stakes that block what used to be the road to the Barry Storm Jade Mine. There is also a point of interest stake marking this entrance.  Don’t confuse it with a lone metal gate about 1/4 of the mile before this point.  The road that leads to the jade mine is no longer a designated road, so you have to park and hike in from this point.  It is about a 2 mile round trip hike on an easy trail to the mine site.  The Black Eagle Mine Rd. road requires 4WD.  Use extreme caution when exploring old mine sites. 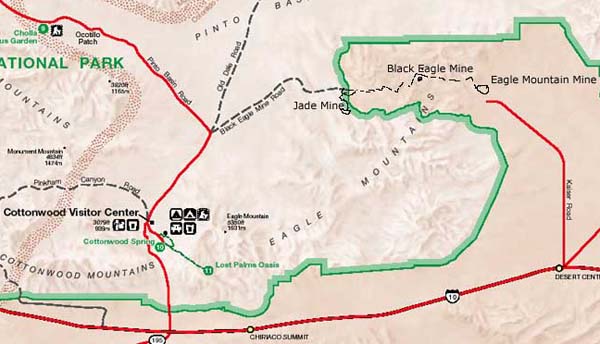 Map of Black Eagle Mine Rd. and location of several mines.