Imagine trying to make a name for yourself when your uncle is referred to as the Father of our Country.  Colonel Henry Washington did a pretty good job of making a name for himself and also for naming many places in California. I guess you could call him the father of our County, actually many counties in the State of California for that matter.

In the early 1850’s Colonel Washington was paid to survey many areas of the Country including Florida, Colorado and California.  The history of this baseline dates back over 160 years to November 1852. At that time, Colonel Henry Washington was the deputy surveyor under contract with the U.S. Surveyor General of California.  He was given the task of establishing an Initial Point of all future surveys, where the baseline and meridian would intersect at a highly visible point in Southern California. 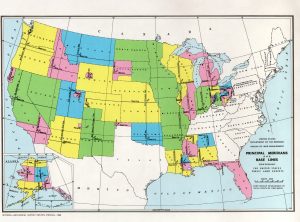 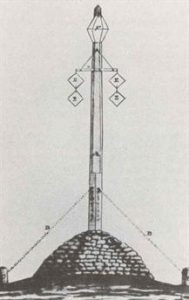 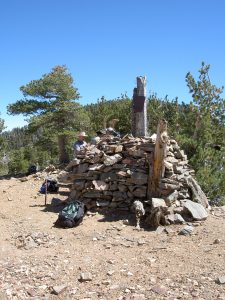 Little did Colonel Washington know that his monument would become the point of beginning of every piece of private and public property owned by over 25 million inhabitants of Southern California. 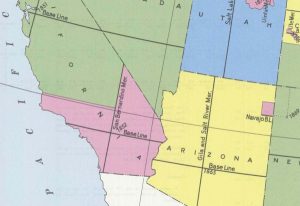 Baselines of the Southwest

Washington also traveled north to Death Valley, and south through Temecula to the Mexican border; he noted “Indian Villages” in the vicinity of Temecula.  He was paid to survey the Coachella Valley and during this survey he is credited with naming Cathedral City in 1855.  During a survey of the Colorado Desert, he reportedly stood in Cathedral Canyon and said the rock formations looked like a European cathedral – the name stuck.

When one travels through the heart of San Bernardino today, one of the main streets that you might see is Baseline Avenue. This street is actually on the baseline set by Colonel Washington.  This street exists west of the meridian line but if you go east of the meridian line you travel through the mountains and down into the Mojave Desert.  Colonel Washington was one of the first non-native people to record his visit across the Mojave Desert. 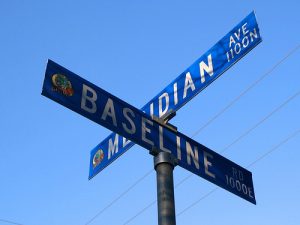 Today as you follow the baseline to the east you travel through downtown Yucca Valley, then as 29 Palms Highway curves north the baseline follows Yucca Trail, which then turns into Alta Loma Drive in Joshua Tree.  At the termination of Alta Loma Drive there is a mountain of boulders with a canyon headed south.  While on his survey of the baseline in 1855, Washington noted this canyon, and at that time he also noted this huge rock mountain.  He mentioned petroglyphs on the rocks and the hole at the end of the canyon dug by coyotes to reach shallow water, thus he named the canyon, “Coyote Hole Springs”.  There is also an ancient Native American “work circle” in the area, you will find it if you explore the area thoroughly. 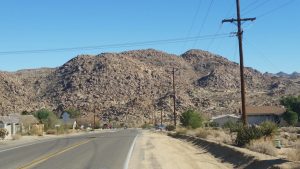 Mountain of Boulders on the Baseline in Joshua Tree Looking East 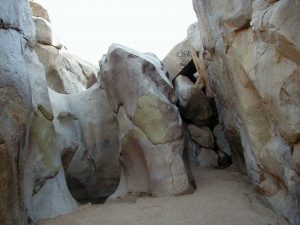 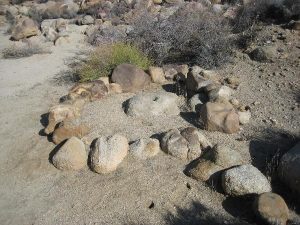 After this point he went around the rock mountain and proceeded to survey the baseline east to 29 Palms and beyond.  Eventually he found an oasis with Native Americans living amongst the palm trees, thus he named it Twentynine Palms (we will use the term 29 Palms in this blog).

29 Palms Mural of Henry Washington. In this 17 by 80-foot rendering, Chemehuevi Indians gather and work in and near the water, a woman offers the exquisite baskets for which the tribe was known and first surveyor Colonel Henry Washington in 1855 is depicted. This mural was painted by Ron Croci of Honolulu and Robert Caughlan III.

The community of 29 Palms has many murals and one of its many murals commemorates the visit of Colonel Washington; it is officially known as Mural #2.  29 Palms was known as the Oasis of Mara by the natives. The life-giving springs of the Oasis of Mara supported Native Americans and early settlers, and its famous fan palms were the source of the 29 Palms name.  The year after Colonel Washington’s visit a deputy surveyor reported that “near the springs the land has the appearance of having been cultivated by the Indians”.  He counted 26 palm trees at that time but the name “Twentynine Palms” was already recorded.  He further stated “there are Indian huts in section thirty-three, the Indians use the leaf of the palm tree for making baskets, hats, etc.  Around the springs there is a growth of cane of which the Indians make arrows for their bows.”

In 1855 Colonel Henry Washington headed north with his survey and came through the then unnamed Johnson Valley.  Near the west end of the valley he found two elderly Indian women alone at a spring, thus Colonel Washington appropriately named it Old Woman Springs, and the name was recorded for all to ponder.  The two Indian women may have been left there to watch young children; the rest were probably in the nearby mountains gathering pinon nuts and hunting, as hunter-gatherers were known to do. 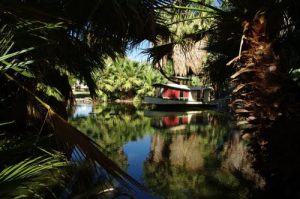 For more information on Old Woman Springs check out this blog from last year: 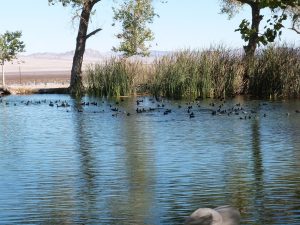 I was surprised how difficult it was to find personal information on Colonel Washington’s life but I did find a website that was helpful in finding old surveys:

I was also able to obtain a sample of Colonel Washington’s field notes from the San Bernardino County Surveyors Office and I downloaded some maps from the above website. I inserted them on Google Earth and the land features lined up really well.  I will post many of these maps and notes below for you to enjoy.