UPDATE: This particular blog about Gram Parsons has been interesting to say the least, intended to only be one story has now turned into three.  After I first wrote the first leg of this story about a year later I got the crime-scene-photo from a friend, then I updated this blog with the pixelated picture only to remove it later at the family’s request.  We found the exact same rock that was in the 1973 crime-scene photo in 2014, then somehow I ended up in contact with Phil Kaufman and had plans to meet him and give him a copy of the photo which my friend Brad was to give to him.  Tonight (9/28/14) I had that meeting and I was thrilled to have met him but also moved by what I saw.

Mr. Kaufman was in touch with my friend Brad, after waiting all day for the call he called, he had arrived and was staying at the Joshua Tree Inn, the same place Gram had died over 40 years ago.  We were to have a change of plans, on the phone Phil said to meet him at Pappy and Harriet’s in Pioneertown instead of the Joshua Tree Inn, I was hoping to get pictures at the Inn so I was a bit disappointed but in the end what transpired was much more thought provoking.

We got to Pappy’s, Hank Williams III was performing that night and he was doing his sound check.  All of us, my wife Kerry, Brad and his wife Deb and I looking and waiting wondering if we would recognize him.  I walked around then there he was, when I saw his shirt with many name on the back of recording artists like Emmylou Harris I figured it was him. Wearing shorts I could see his iconic rooster tattoo on his leg, this was my verification that it was him.  I said Phil, he turned around and said “yes”, then quickly said “well only if you’re not a cop”.  He was graceful and kind and generous with his time. He sat at the table with us outside and we talked just like old friends.  Brad presented Phil with the photos of the crime scene and I could see Phil looking at it, I could almost imagine how those 40+ years ago must have felt like yesterday, I felt bad for him but I also know that he must be proud that he followed through with his friend’s wish; from all my research I came to the conclusion that this is what Gram would have wanted.  Gram did not want the normal funeral, he stated that, Gram always strived to be immortal in the sense of being famous and Phil helped him with his wishes.

The Hi-Desert has grown a lot, much of which was caused by stories like this, also many movies were filmed here and also being only 2 hours from Hollywood it became a quick getaway, all of these stories being a thread in the history of the area. Tonight Pappy and Harriet’s was booming all because of people like Phil.  One of the originators of the fame of our area, one of the oldest threads was sitting at Pappy and Harriet’s and no one recognized him, chatting with us gracefully, Hank Williams III playing in the background, young “hipsters” from the Los Angeles area wandering around, listening to Hank and none of them knew the importance of this man to Pappy’s, other local businesses and the culture of the area.  Countless Gram Festivals have been held here, a local home grown band, a favorite of this area is Gram Rabbit, in part named after Parsons.  I found it quite ironic.

Mr. Kaufman, you look great for being 79 years old, thanks for signing my book, I look forward to meeting you again and thank you for your kindness.  I think Gram would be proud of his buddy fulfilling his wish.  Gram’s fame will live forever thanks to his music and thanks to you, but not just Gram, you and Gram will live forever through local legend and lore. 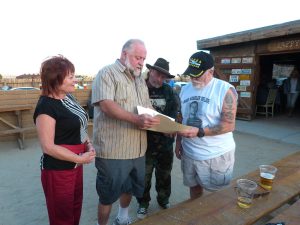 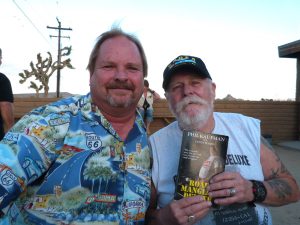 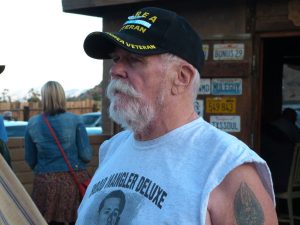