There are no two ways about it. I love event photography! County fairs. Tractor pulls. Rodeos and races. Wherever there are faces to photograph I am a happy girl. 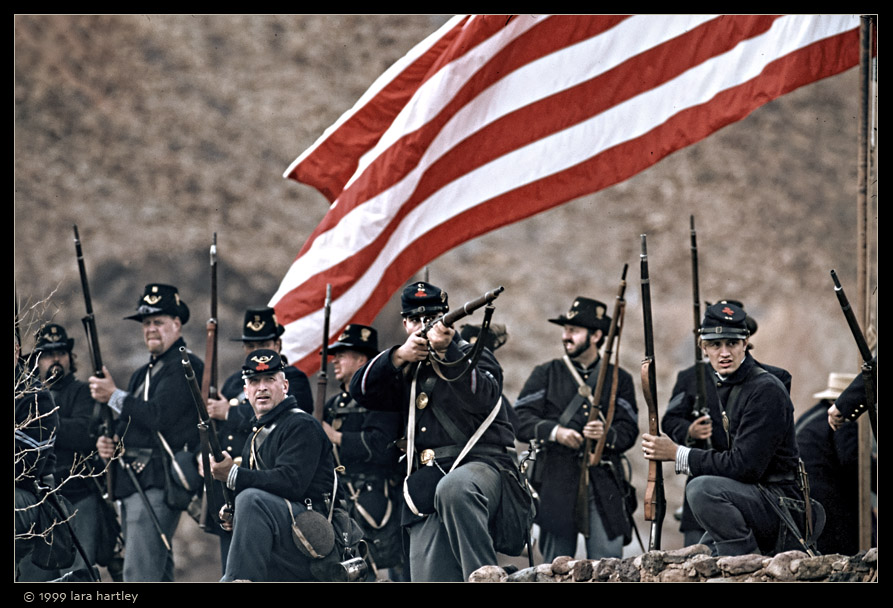 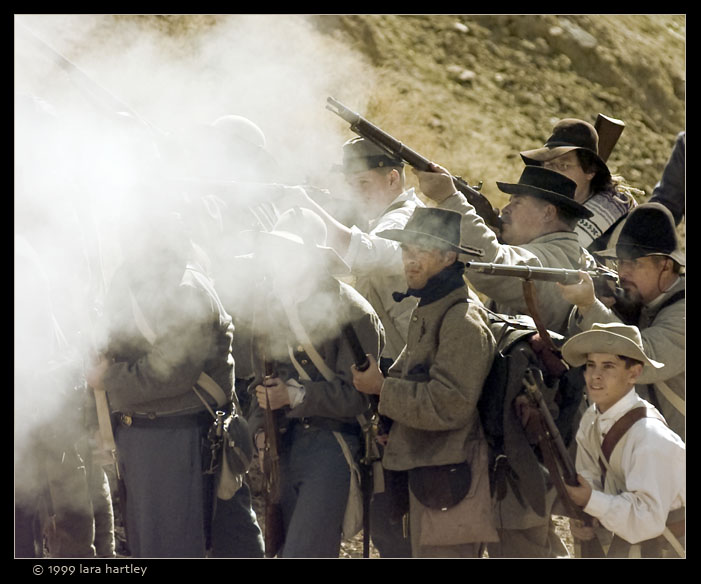 Confederate troops head up the gully to attack the Union army. 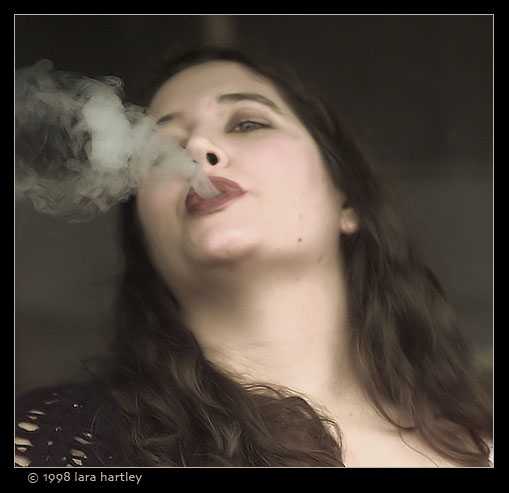 This young woman was thoroughly enjoying her role as one of the girls in the old brothel.

Women played their parts much as they did in the 1860’s – by keeping the home fires burning and “entertaining” the troops. One girl in particular was so colorful as she smoked her cigar, letting the smoke trail seductively and defiantly from her lips. She stood on the steps of the old whorehouse calling out to the men in uniform, thanking them for the pleasures of the night before – all in good fun and mostly good taste. After all, this was a family event. 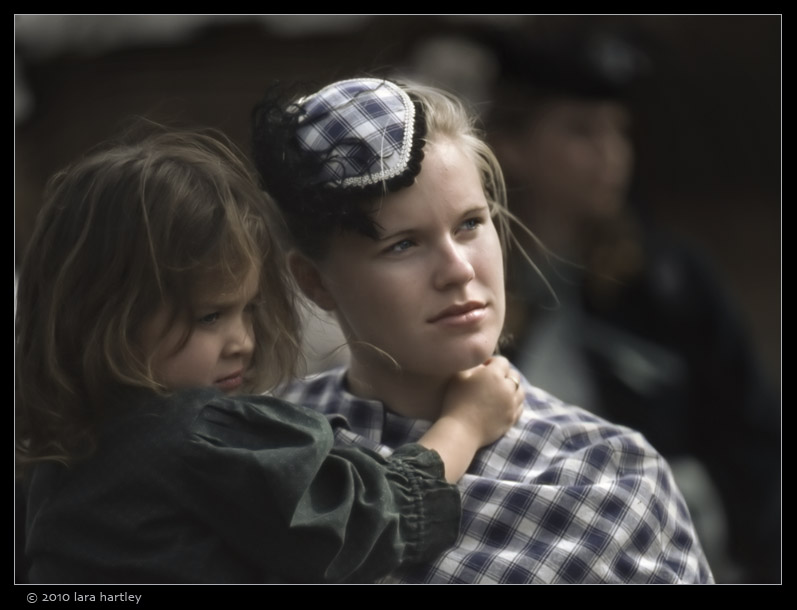 Woman and child at the re-enactment. 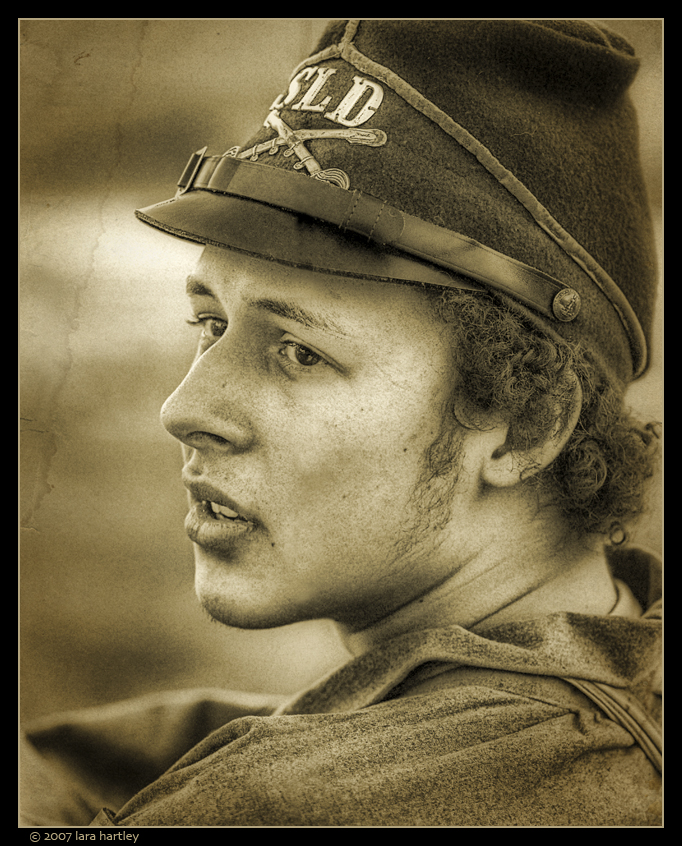 I imagine this young man was about the same age as his historical complement during the American Civil War. He is dressed as a member of the Sussex Light Dragoons, an early war militia cavalry unit.

Ladies, not workin’ girls, strolled about in hoop skirts and crinolines looking every inch southern and northern belles.

They were the wives, mothers and sweethearts of those dashing young and not-so-young men whose bodies would soon litter the make-believe fields of war.

I wanted to be as close to the action as possible without ruining the authenticity of the event for those participating, and those spectating. To achieve this, the president of the area Civil War society dressed me in a union greatcoat and cap. This was so that from the back, close to the battles I would look like I belonged.

My traveling companion was dressed similarly as he was shooting video for a local production company. We looked WAY too authentic as at one point several soldiers shot at us as we did our own shooting from under a bridge, smack dab in the middle of a running battle. 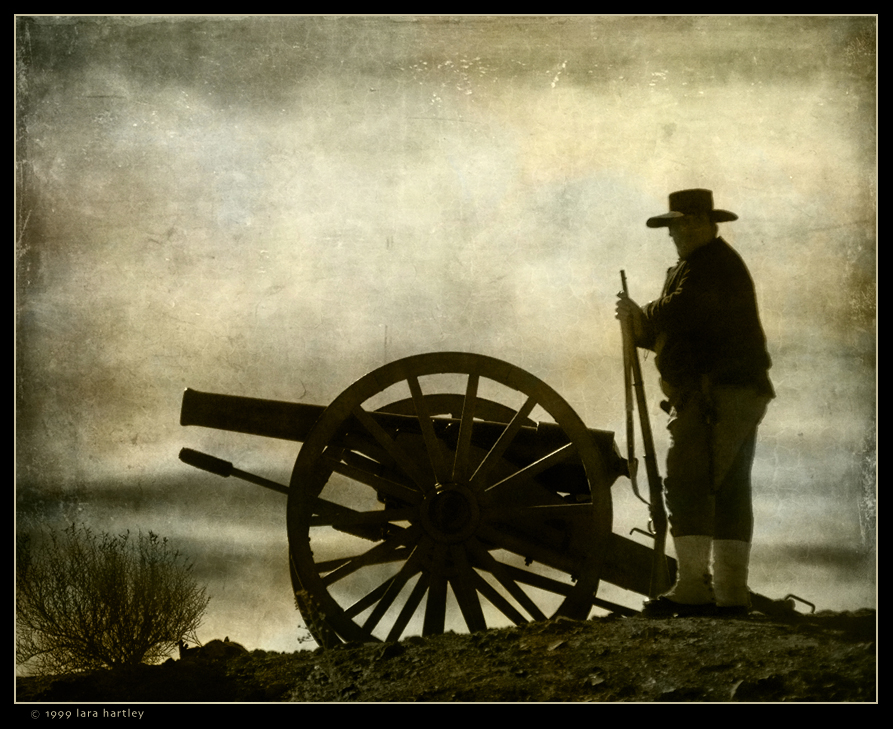 One soldier guarded the cannon before the battle. 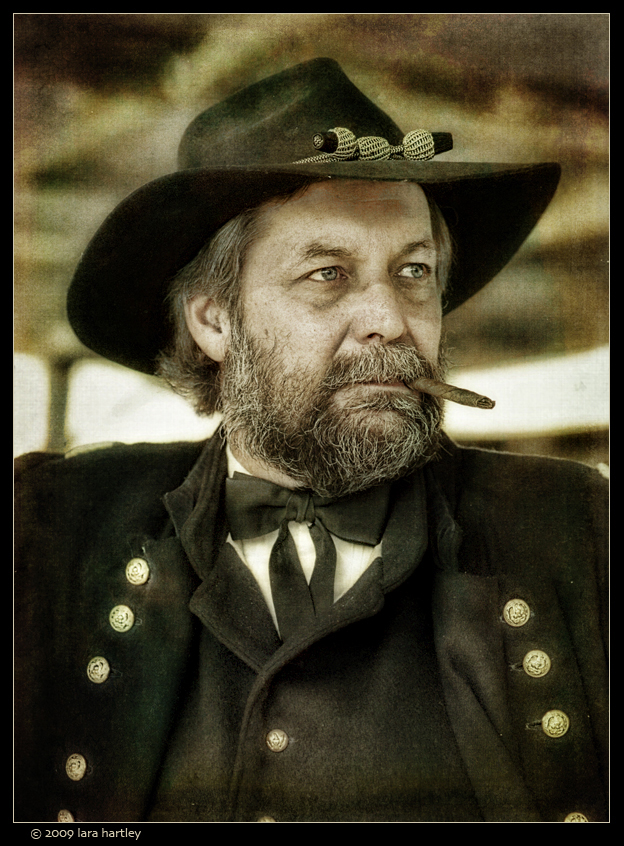 Well, we didn’t KNOW they were going to be battling there. It just looked like a good location from which to grab some images.

Although the Friday before the event had been clear and warm, Saturday was abysmal. Cold. Rainy. WET. Wet wool smells rather like wet sheep. 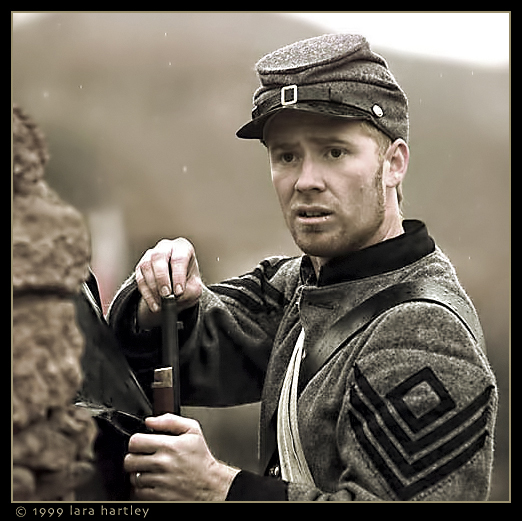 Even in the rain this red-headed Reb was intense during the battle scene.

I wrapped the camera and the different lenses in plastic wrap to keep them dry. What a major pain in the tookus! The wrap kept coming unwrapped and I wound the stuff so tight around the zoom lens I couldn’t get the zoom to zoom.

But perseverance usually pays off and this time was no different. Good images can come from bad times. Well, not “bad” times – just trying times….the kind of times that can test a woman’s dedication to getting the job done.

And you just have NO idea what a Union Cap can do to one’s hair! 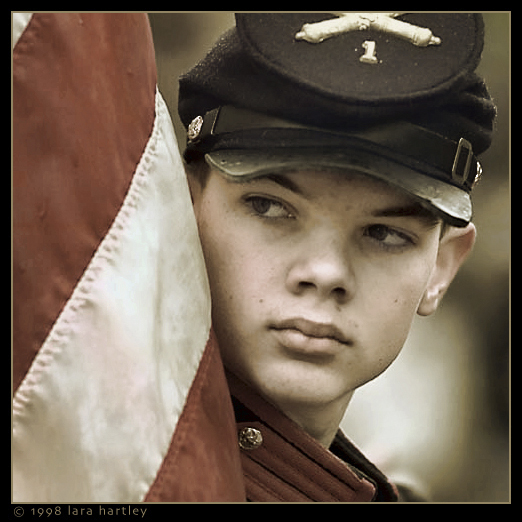 One of my Flickr contacts had the following to say about this young man acting as a flag bearer. “The honor of carrying the colors was accorded to the bravest (and wherever possible the most physically imposing) grown men of a given unit. A child this young might have served as a musician and certainly could have posed for a photographer with his unit’s regimental or national flag. However, the chances of his being the actual “flag bearer” were about nil.

And from Richard Lemmers, a National Park Service ranger at Gettysburg, “The soldiers designated to be regimental flag bearers were part of what was called the Color Guard. 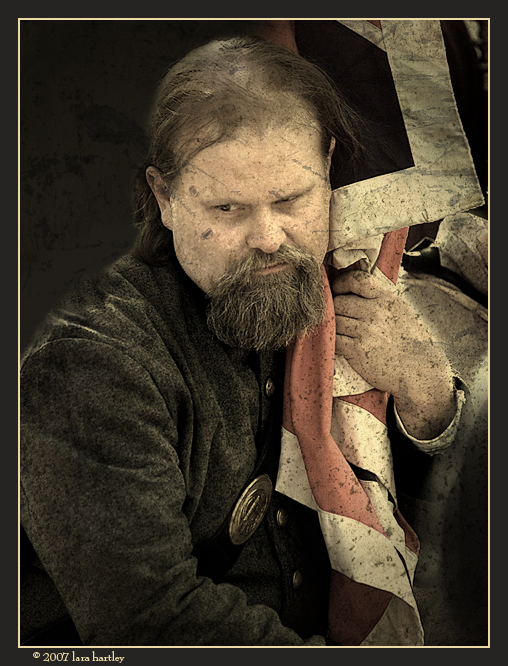 Soldiers knelt and prayed before the battles during the re-enactment.

“I’m not sure of how it was in the artillery or cavalry branches in the armies, but in the infantry tactical drill books, which trained the men on how they were expected to fight in formation, the color guard was comprised of 8 sergeants and corporals selected from the various 10 companies in the unit. They were selected for their military bearing. They were usually the bravest and toughest non-coms.

“In most Union infantry regiments the color guard actually had two flags to look after, the National Color and the State Color. In a battle line the color guard would be about in the center of the formation in between the two center companies. The company whose commanding officer was closest to the color guard was referred to as the color company. The color guard, it may surprise you to know, was under orders not to fire their weapons unless they were in very close proximity to the enemy. This was to insure they had enough ammo to defend the flags. It was a disgrace to the unit to lose their flags. The men had to also be skilled at bayonet drill. In Confederate units there usually was only one flag, but they still had 8 men in the color guard.”

For more about the boys of the Civil War:

Being a civil war drummer:
www.wikihow.com/Become-a-Civil-War-Drummer-(Reenacting)

Watch and listen to the video: