The call of water – page two

Back to page one of this story

Traces of the SP LA & SL Railroad telegraph station can be seen close to the tracks on the west end of the canyon, and there is a small cemetery with what appears to be five stone-covered mounds and wooden crosses south of the station. 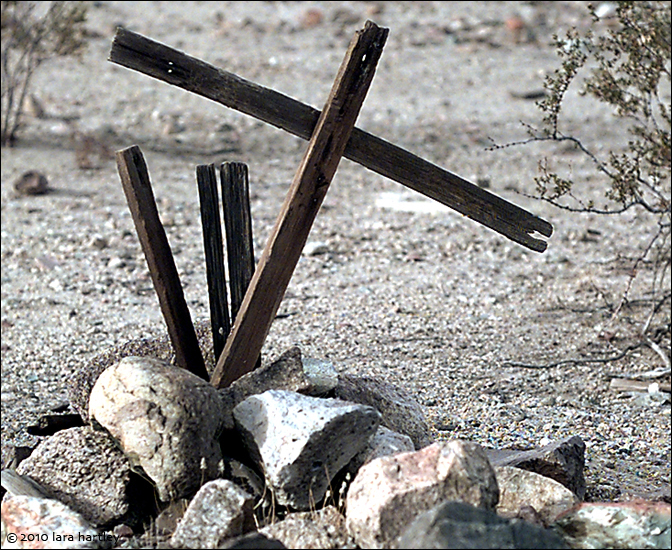 A few of the graves in the Afton cemetary have wooden crosses. One of the burials has been identified as that of Jose Flores.

One of the persons buried there is Jose Flores (b. approximately 1882 to d. May 29, 1906). Flores was one of three men who arrived at Afton Station on an early-morning train, hoping to be hired on. The three were intoxicated, and after attacking Section Foreman Robert Y. Williams, who was severely injured in the brawl, Flores was killed. The other two were wounded, one fatally. [John V. Richardson, Jr., San Bernardino County Museum Association Quarterly, Vol. 55, Number 4, 2010]

Here and there you can see signs of past mining activity, like the precariously situated “glory hole” hanging high above the canyon floor. There are no shafts in this mine, just a pink gash in the hillside. 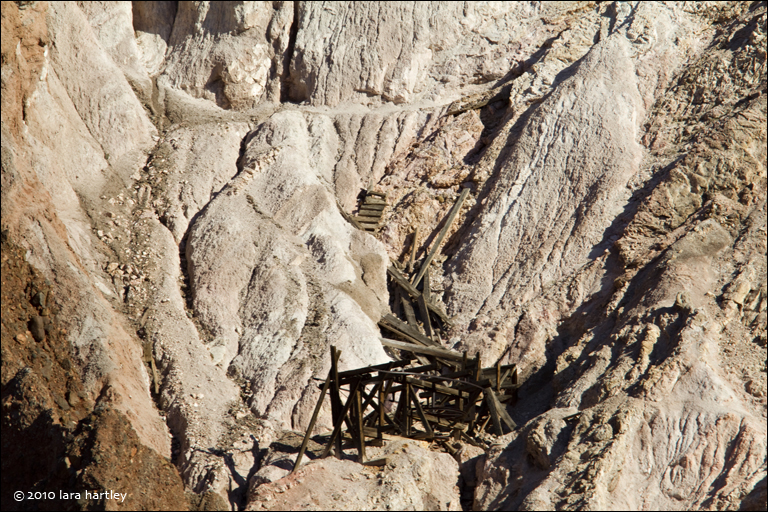 Structures at the defunct Cliffside Mine in Afton Canyon are slowly sliding into oblivion. Those wooden slats in the middle of the photo used to be up on what looks like a narrow walkway a few years ago.

Etched into one of the timbers are the words “Arbuckle Mine,” leading writer Bill Mann to call it the Arbuckle Mine in his book “Guide to 50 Interesting and Mysterious Sites in the Mojave.” 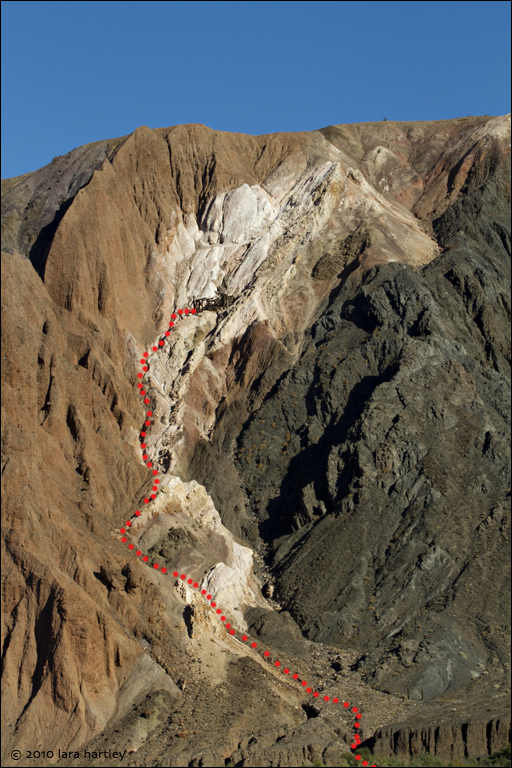 It is a steep climb from the bottom of Afton Canyon up a wash to the Cliffside Mine.

According to desert mine researcher Daniel Dull, the leftover dark timbers, (in stark contrast to pale pink and rose-coloured rock) belonged to the “Afton Canyon Mine (a.k.a. the Cliffside Mine). According to state records, the Cliffside Magnesite Company was working the mine in 1917 and 1918 mining fine-grained magnesite. Ore mined from the site after 1919 was sent down the mountain and across Afton Canyon along a 1900-foot-long aerial tramway, and shipped by railcar on the Los Angeles and Salt Lake Railroad to the International Magnesite Company’s mill in Chula Vista, Calif. There it was processed, treated and shipped to steel manufacturers on the East Coast to be used as a lining in open-hearth steel furnaces.”

Climbing up a steep boulder-y wash you can reach the mine and see the huge crank-wheel that helped haul men, supplies and ore up and down the mountain.

Located between the Afton Road and Basin Road exits, Afton Canyon is designated as an Area of Critical Environmental Concern to protect plant and wildlife habitat, as well as to preserve its scenic values. Wildlife viewing is best during early morning and evening hours. In the canyon, birds tend to gather in the thick vegetation. Along washes and streams, vegetation is critical for wildlife food and shelter. Many routes in Afton Canyon have been closed to vehicle travel to protect these wildlife habitats. 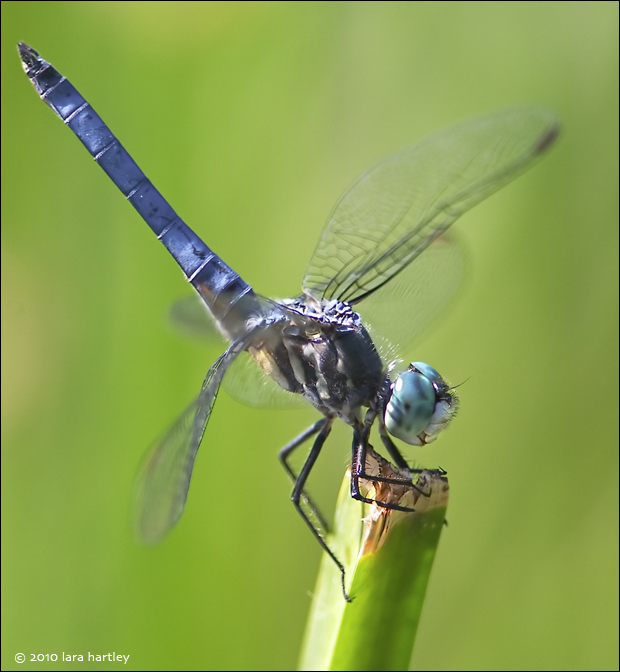 Dragonflies call the lush riparian areas of the canyon their home.

The BLM Web site states, “An invasion of salt cedar reduced wildlife populations to a fraction of what they once were. But animals not seen in the area for more than a decade are now returning, due to efforts by the Bureau of Land Management, in cooperation with the California Department of Fish and Game to eradicate the tamarisk. This program, one of the largest riparian restoration projects in the state, is attracting many of the birds and other animals that once lived here.” 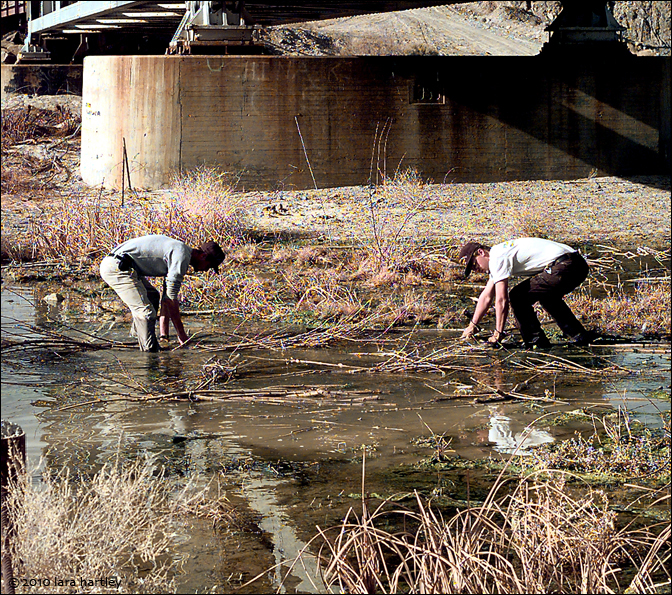 Bureau of Land Management employees plant willow and cottonwood cuttings along the river as part of the Afton Canyon restoration project.

The canyon floor is NOT suitable for passenger vehicles, and erosion can make even the graded road leading down to the campground unreliable. Check with the BLM in Barstow for recent road conditions.